Why Do We Hide Pain? 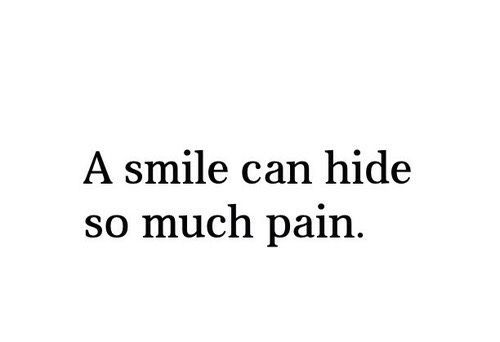 This might not be a long one because it’s really just a question.  One that everyone may have a different answer for:

Why do we hide our pain?

I notice that we’re told most often to keep smiling even though we’re hurting.  I saw a quote that said the ability to smile while hurting shows you’re strength.  Yet, it also makes sure that people don’t know you’re in pain.  So, you could continue being hurt because nobody realizes you’re suffering.  Eventually, you break and that smile either disappears forever or becomes the most empty thing imaginable.  A smile with nothing behind it isn’t a good thing.  In fact, I’d say it’s a sign that the soul is nearly dead.  This is why hiding our pain is such a bad idea.

The word ‘festering’ comes to mind here too.  Think of pain and negativity as an infection, which needs to be expunged.  Easy to do with a physical ailment since we have medications for that.  With emotional and mental pain, we need to vent and that can be tough.  It leaves us exposed and vulnerable as well as becoming a source of negativity for the person listening.  If you vent to someone who doesn’t like such things then they’ll react in a way that your pain is enhanced.  This is why many people keep everything bottled up until mental illnesses and physical symptoms turn up.

I remember how I was for such a long time.  Thoughts were dark and I felt like nobody ever understood me.  People bossed me around or used me because I was a good worker, but there was rarely any reciprocation.  I was even made to feel shame for asking for help or rest.  I kept my pain hidden from everyone and only let it out when either alone or pushed too far.  Now, I have anxiety and get very nervous about sharing my feelings towards others.

I did take on the idea that I need to make sure people know when I’m upset, but that came with a problem.  I’d get in trouble for showing that I was sad, mad, or nervous.  It was improper and uncomfortable for those around me.  This made me realize how much our society pushes for us to keep our darkness and pain hidden for the sake of others.  We’re told it’s for the best, but I don’t know.  We let our insides rot to make sure we don’t upset those around us.  Yet, they can see us deteriorate as time goes on, but we still aren’t ‘allowed’ to say anything.  This genuinely makes me wonder how many chronic physical ailments are created or simply made worse by this mentality.

Well, that’s my thoughts on it.  What do you think about hiding your pain?  Actually, do you think this is a generational thing too?  I’ve noticed that older people are bigger on hiding pain than younger ones.  Maybe other societal factors play into how often this is pushed as well.

Charles E. Yallowitz was born, raised, and educated in New York. Then he spent a few years in Florida, realized his fear of alligators, and moved back to the Empire State. When he isn't working hard on his epic fantasy stories, Charles can be found cooking or going on whatever adventure his son has planned for the day. 'Legends of Windemere' is his first series, but it certainly won't be his last.
View all posts by Charles Yallowitz →
This entry was posted in Uncategorized and tagged anxiety, depression, emotions, feelings, hiding pain, mental health, mental illness, suffering. Bookmark the permalink.

17 Responses to Why Do We Hide Pain?