Leading from the Back

Posted on September 14, 2022 by Charles Yallowitz 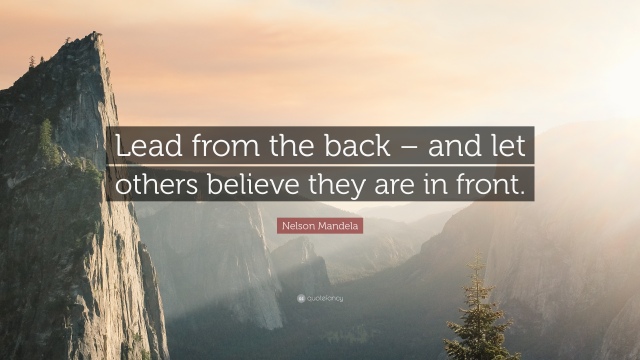 What is leading from the back?  It’s exactly what you think.  This would be a military leader who stays away from the frontline.  They give orders while analyzing information and listening to advisors.  They’re still in charge, but not in as much danger as your average soldier.  Sound familiar?

This is the type of general we see a lot in reality-based stories.  It’s because modern generals don’t physically go into battle.  Not typically anyway.  Keep in mind that this isn’t a negative thing.  It’s simply how war is waged in this global culture.  This style requires that leaders aren’t the more physically aggressive or badass, but the ones who are smart enough to properly direct armies and resources.  It could also be wisdom or some mental ability that makes them the best for the job.  Think of them as the chess masters who are trying to outthink an opponent who isn’t in the room.  Not easy and requires a lot of mental flexibility.

Generals who lead from the back are difficult to put in a main hero role.  It’s because they’re not in the action that the author will have trouble maintaining tension.  Movies and television can be easier with the more visual development of tension.  You can also shift to action there with more ease than in a book where the general is the main POV.  It can make stories clunky and disjointed even if you’re showing the proper reactions towards the events.

Another issue is that many readers might not think the general has anything at stake.  A person may see a leader who stays in a safe zone as weak and not worth the respect that they’re given.  This stems from how our culture pushes fictional heroes who are tough, aggressive, and violent.  A real general isn’t likely to go charging into battle with two machineguns firing and a rocket launcher strapped to his back.  General Nick Fury isn’t a real person!  People tend to forget this, so seeing a modern general in action on the page will come off as boring.

Thankfully, there is an audience for this type of story.  People who enjoy the strategy side of war would be interested in seeing things from the generals perspective.  Also, anyone who is curious about the psychological impact on a person who is aware that their decisions cause others to die.  Both routes require that the author show the mindset of the general, so you may be looking at a first person POV tale.  They aren’t always the same people too.  The first group might not be interested in the toll such decisions take on the psyche since they’re focused on the ‘art of war’.  The second group might not care about how the war goes so much as how the general handles wins and losses.  So, it can be a challenge to hit both marks.

The key to making an effective ‘lead from the back’ general is research.  There are plenty of books and interviews out there.  Generals have talked about their job for so long that the biggest challenge is to decide on whose mindset to follow.  That’s the other part here because we’re dealing with humans.  Generals aren’t cookie cutter leaders.  Each one has unique strengths, weaknesses, morals, viewpoints, and strategies.  For example, some generals will prefer bombardment to reduce their own casualties while others will have no problem throwing their armies into harm’s way.  So, pick a general whose mentality and tactics fit with what you want then start from there.  It doesn’t have to be a perfect match, but it can be a jumping off point, especially if the person has talked about the mistakes they’ve made.

So, what are your thoughts on this type of general?

Charles E. Yallowitz was born, raised, and educated in New York. Then he spent a few years in Florida, realized his fear of alligators, and moved back to the Empire State. When he isn't working hard on his epic fantasy stories, Charles can be found cooking or going on whatever adventure his son has planned for the day. 'Legends of Windemere' is his first series, but it certainly won't be his last.
View all posts by Charles Yallowitz →
This entry was posted in Thoughts and tagged author, fiction, generals, leaders, leading from the rear, military, strategy, war, writing. Bookmark the permalink.

9 Responses to Leading from the Back