Posted on January 21, 2022 by Charles Yallowitz 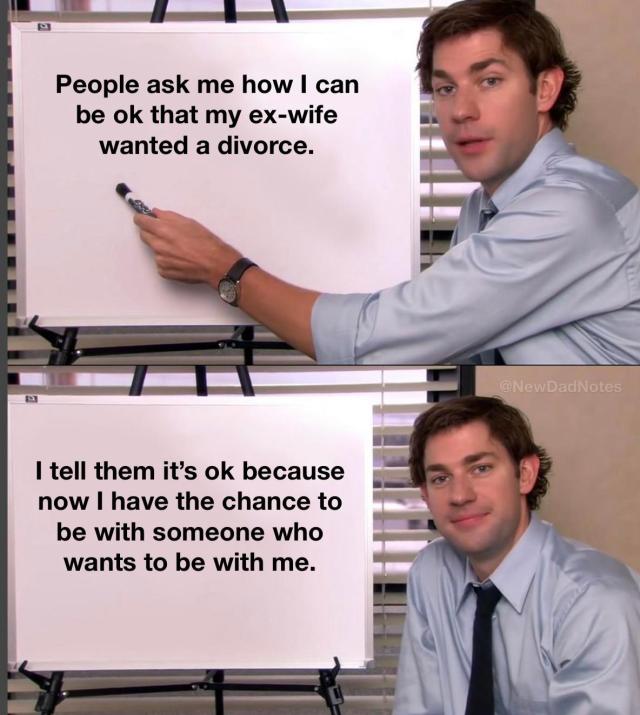 Not really on board with the picture just yet, but searching for a divorce meme is rather brutal.  It’s either ‘the woman is free’ or some sappy, hallmark-style saying.  Both categories felt like they weren’t right for how I’m feeling.  Well, I’m writing this in November, so I might not be feeling this way when I get to today.  Then again, I’ve been frustrated by this for a while.

I’ve noticed that people have a weird way of jumping to conclusions or simply ignoring divorces.  For example, it’s common for people to assume that my ex-wife has full custody of our son while I’m barely in the picture.  So, when I show up or start pointing out that I’m involved, I get apologies and confusion.  Other situations I’ve run into don’t work with divorced couples at all.  It puts us in a position where we have to either work together or one can eliminate the other from participating.  Sadly, my ex-wife and I don’t typically fall into that first choice as often as we should.  I’m sure many exes are like that too, so it’s frustrating when there isn’t any thought given to divorce.

The truth is that divorce is much more common and co-parenting is gaining more ground as time moves on.  It isn’t like the old days where mother gets the kids and father only shows up for a few holidays and the occasional weekend.  A big reason for this is because men have become more involved in child-rearing.  Back when I was a kid, the concept of a stay-at-home father was a joke or sign that the man was weak.  Now, it’s a common practice and shows that men can raise children as well.  Of course, I still get strange looks in public and people still talked to my ex-wife as if I wasn’t doing anything, so we still have a long way to go.  My point though is that men are more involved in child-rearing, which changes how divorces go.  Yet, people always jump to the conclusion that it’s the mother running the show with the father along for the ride or absent.

I think fiction doesn’t help here either.  See, I am bringing this back around to writing in some fashion.  Divorce with children in fiction typically seems to fall into 2 categories:

Touching on that last bit some more. I have become aware that divorce stories do tend to put the blame and negativity on the husband.  Either they were too immature or working all the time, but the reason for the divorce does tend to get put on the male’s shoulder.  I do see how this happens a lot in the real world, but fiction making this the only scenario results in people thinking it’s always the case.  So, people assume and it causes problems when you have a co-parenting situation.  For example, the father will be left out of the loop on education or medical information even if they are legally supposed to be included.  This can force the father to call and demand such things out of frustration, which makes them come off as unhinged.  It can all be avoided if people remember they are dealing with a divorced, joint custody couple and make sure that they include both as long as that is the custody agreement.

Going to the opposite side, there’s also the idea that if parents are co-parenting then they are getting along.  Not always the case.  It could be that neither parent could be seen as better for the child than the other and it was determined that both are needed.  It could be that it was an agreed upon arrangement, but relationships can sour even when the child’s welfare is at stake.  You never know how well communication is going, so don’t assume it is amicable.  That parent you talk to could be angry at the other for one reason and decide not to share the information you just gave them.  It’s immature and selfish, but it’s something that happens.

Now, I want to make it clear that I’m not saying these scenarios are what I’ve gone through.  I have dealt with people assuming I’m an absent father since the divorce and I’ve had to fight to be included in things.  That’s what brought on this post, including a few situations that were fine for married people, but a power struggle for anyone co-parenting a child.  So, I’m frustrated and wishing more people would think about divorce when they create these systems.  That and vary up how you portray them in fiction because that’s where people get their ideas of divorce being the same across the board.

And that’s really that.

Charles E. Yallowitz was born, raised, and educated in New York. Then he spent a few years in Florida, realized his fear of alligators, and moved back to the Empire State. When he isn't working hard on his epic fantasy stories, Charles can be found cooking or going on whatever adventure his son has planned for the day. 'Legends of Windemere' is his first series, but it certainly won't be his last.
View all posts by Charles Yallowitz →
This entry was posted in Thoughts and tagged divorce, fiction, heartbreak, marriage, reality, society, tired. Bookmark the permalink.