Posted on October 16, 2020 by Charles Yallowitz 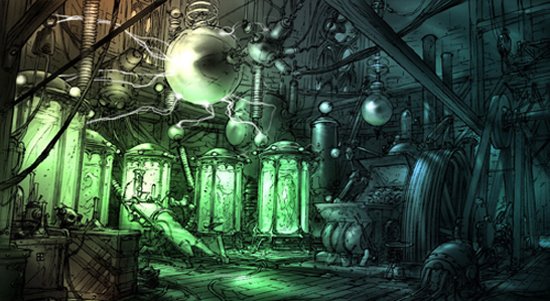 Welcome back again.  Today, we have 3 creatures donated by Victoria Zigler.  Let’s get right to the creation.  Just have to pull the switch and we’re good to go.

This adorable beast is found in the Untaluk region, which has thick forest and lush grasslands.  It has been domesticated by the locals to help with hunting because all of the local fauna are experts at hiding.  The Nifoxchu depends on senses other than sight to locate prey, which it happily shares with its family.  Its sense of smell is very acute and its nose extends half a foot from its tapered head.  They can catch the scent of a target from two miles away and continue tracking it as it closes in.  Even more powerful, its large, cupped ears can hear noises from five miles away.  To protect its eardrums, the Nifoxchu will split its long, furry tail and bend it forward to act as earplugs, which simply muffle the sounds.  Delicate pads on their wide feet help with picking up on tracks of other animals, which they will follow if they have no other choice. All of this makes them excellent hunters, except that their teeth are very small and they have blunted claws.  This is why they domesticated themselves to humans.  While the Nifoxchu can track prey down, it is difficult for it to make the kill, so it depends on its adopted family for that part of the hunt.

It is believed that this river monster spends most of its time submerged because nobody has found it underwater.  The only time it has been spotted is when it rises above the surface, which is very rare.  It resembles a giant toad that is a mottled brown and has hardened warts that are similar to slick rocks.  Towering over the trees, it has very small eyes that are nearly hidden by the wrinkly brows.  Whenever the Occooneebbeze appears, its feet remain in the water, so nobody knows what that body part looks like. This also causes the river to be split and dammed until the creature submerges once more.  Nobody how something so large fits into the river or why it rises since it has never been recorded eating or mating.  In fact, the stories say that there is only one Occooneebbeze, so some believe it rises to take a yearly breath before going under again.  Those who have investigated the water after the creature disappears have said that there is no sign of it, but there is too much churning debris for them to see clearly.  A current theory is that it is really the riverbed since it has been pointed out that the plants growing out of its back are the same seen above the surface.

Living in the deep ocean, this is a large eel that has eight long fins around its cylindrical body.  It is dark green to help it blend into the ocean and its white eyes act as lures for prey when it is hiding in its lair.  Instead of it’s body tapering into a thin tail, it stays thick and ends with a slight bump. Within this part is a natural spring that launches the Torogllapet’s upper half out like a telescope to snatch prey that is coming by.  Its head is protected by being kept within the fleshy folds of its neck, but it comes out when it is about to strike. It does not have any teeth, so it sucks in its prey to swallow whole and crushes it when it compresses once more.  This fish isn’t the brightest, so it has been known to attack larger animals that happen to have a part of themselves pass too close.  Because of this, they are commonly caught by local fishermen.  They are popular in sushi because their bones dissolve when brought out of the water and most of their body can be cut into discs that are entirely edible aside from the skin.

Charles E. Yallowitz was born, raised, and educated in New York. Then he spent a few years in Florida, realized his fear of alligators, and moved back to the Empire State. When he isn't working hard on his epic fantasy stories, Charles can be found cooking or going on whatever adventure his son has planned for the day. 'Legends of Windemere' is his first series, but it certainly won't be his last.
View all posts by Charles Yallowitz →
This entry was posted in Monster Maker Fun and tagged creativity, creatures, halloween, humor, imagination, Monster Maker Fun, monsters, october. Bookmark the permalink.