Posted on September 21, 2020 by Charles Yallowitz 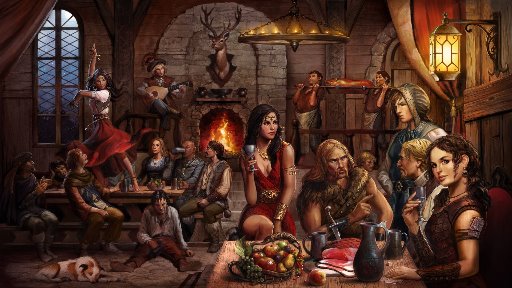 Yeah, I’m not putting the picture of a brothel on here.  Yet, the Pleasure Shadow is more than that.  So, I figure a busy tavern will do just as nicely.  After all, War of Nytefall: Ravenous really only shows the cleaner side of Desirae Duvall’s business.  That means you have nothing to worry about if you read on.

When I created Desirae Duvall in her current state, I knew I needed to give her a wild headquarters.  Sticking with her prostitute origins, I felt that making her a brothel madam would work best.  It would explain how she could gather so much information and feed the lustful seductress persona.  This put her in a leadership position as well, so it was no longer a loner causing trouble.  The Pleasure Shadow gave her more stability in her goals, evolution, and decisions.  Desirae now had to guide herself as someone who had a business to protect and grow.  Of course, it exploded into something much larger when I actually began writing the book.

Originally, Desirae was going to be someone who was trying to rise up the ranks of the criminal underworld and using a certain situation to do so.  I wrote her first scene in the prologue and I immediately realized I wasn’t going in that direction.  Her confidence and level of planning in that one scene made it ridiculous to think she wouldn’t have already reached her goal.  Instead, I saw that I had a character who already had power and influence, but it was clearly hidden.  Since nothing about her had been mentioned in the previous 4 books, I had to make her a secret.  This upped her intelligence and cunning to a point where she might be the deadliest thinker in the series.  Considering this change, I had to alter the Pleasure Shadow to become something more than a secret brothel run by an ambitious Dawn Fang.

Most scenes in the Pleasure Shadow take place in Desirae’s laboratory, but I have enough outside of that to give an idea of the place.  The building is large and shielded from people wandering in unannounced.  Similar to the Scrumptious Siren, this place has a lot of attention to serving drinks, food, and entertainment.  There are rooms with stages where a variety of shows can be viewed.  Various balconies are placed around the Pleasure Shadow for Desirae to observe her business from above or secretly show a special guest that she wants to impress.  There are gambling areas even though I never got to show them and rooms dedicated to using magic in case somebody wants to practice a ritual that is forbidden.  Desirae is fine as long as she is paid and the wards she’s paid for are designed to stop any spells that reach a certain level of power.  Much of the place is dedicated to private quarters that can be rented out for a hefty price.  Above it all are the private quarters of Mistress Duvall herself, which guests can only get to if they are personally invited.  That’s easier to do than you think because Ravenous can go for her libido as well as the main reason I picked it.

The biggest challenge was figuring out how Desirae kept the Pleasure Shadow a secret and became a global success.  Thankfully, I’d given her telepathy, which she uses sparingly and gets stronger if she has sex with her target.  Does that really surprise anyone considering how I’ve described the character?  So, she has thousands of loyal customers that enjoy their time at the Pleasure Shadow, but none of them remember until they come in for their next visit.  There are agents everywhere that are able to reactivate customers when it is time for another visit.  Other employees keep ears and eyes out for signs that Desirae has become too well known.  This is solved either by bringing people who know to the Pleasure Shadow for some treatment or eliminating them.  She prefers the former because she can have fun with that.  It sounds like a fairly simple system on paper with a complicated network of agents and planning.  Still, it gets the job done.

Funniest part of the Pleasure Shadow is that I didn’t have a name until I was halfway through the book.  I realized I’d been calling it ‘the brothel’, ‘Desirae’s business’, or the laboratory depending on the situation.  This added to the decision that it would be a big secret because not many people would say the name.  It took a while to come up with something that sounded right.  Obviously, I went with the key components of the debauchery that occurs in the Pleasure Shadow and the fact that it exists in the shadows of Windemere.  It does sound darker and raunchier than the more open Scrumptious Siren, which is oddly cute in comparison.  Took a while to get the name stuck in my head too.  I changed it to Shadow Brothel, Pleasure House, Pleasure Void, and other versions that only had one word right.  Good thing I sensed that I was wrong those times or this would have been a really big mess.

Charles E. Yallowitz was born, raised, and educated in New York. Then he spent a few years in Florida, realized his fear of alligators, and moved back to the Empire State. When he isn't working hard on his epic fantasy stories, Charles can be found cooking or going on whatever adventure his son has planned for the day. 'Legends of Windemere' is his first series, but it certainly won't be his last.
View all posts by Charles Yallowitz →
This entry was posted in War of Nytefall and tagged action adventure, author, brothel, business, Dawn Fangs, Desirae, fantasy, magic, Pleasure, Ravenous, shadow, sword & sorcery, vampires, War of Nytefall, writing. Bookmark the permalink.