Writing Empathy as a Power or Ability 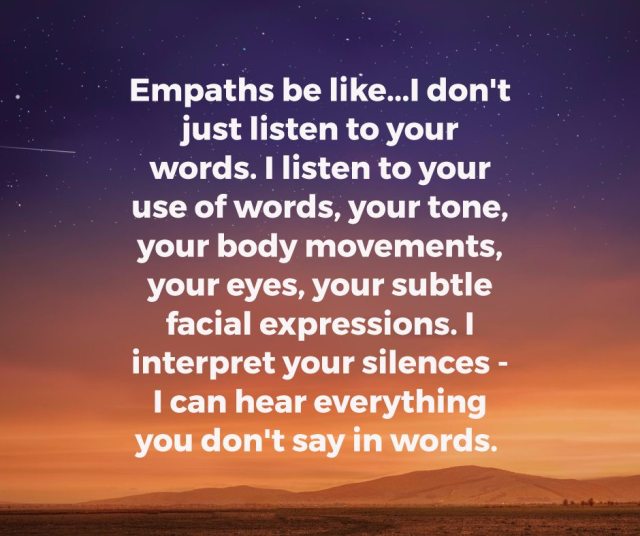 Mary L. Schmidt asked a few months ago about writing a post about empathy or intuitiveness towards emotions.  Now, I’ve thought a lot about this and I think this is something we should look at for every character.  Sure, you have those who possess the power to manipulate emotions and those who can read them from a distance, but those can also be considered telepathy.  Empathy falls into an odd category if you make it a power, so let’s take a look at it.

Why is empathy a tough and strange one to use as a power?  One reason is because it is very ‘narrow’ in scope with it connecting to emotions.  Not thoughts, but the feelings behind that.  Many authors make a mistake in having characters read thoughts along with emotions and still calling them empaths.  As soon as they get words instead of feelings, you have a telepath.  So there’s a very sharp drop-off, which is why you more commonly find it in three versions:

Now, when you have a character with this power, you need to consider how much control they have and if they can influence others.  How exposed are they to the emotions of others is a great starting point.  In fact, this is something one should probably consider for all of their characters.  Empathy is a very important factor in stories.  You want characters to feel for each other in some fashion, especially if they’re friends, lovers, teammates, and enemies.  Yes, empathy doesn’t only deal with fostering and sensing positive.  You also want the reader to feel emotions towards the characters, which means creating empathy in the audience.  Not an easy task at all.

One of the things to never forget in order to create empathy is to use the correct words without being blunt.  Telling a reader that someone is happy will fall flat, but so could just praying that they get the sensation right.  Facial expressions, body language, dialogue tags, and word usage are only some the things to get a point across.  For example, having two characters yell at each other with no exclamation points, only ‘said’ being used, and the lack of face and physical action description will be nothing more than empty words.

Sure, you can get the general idea, but it isn’t nearly as powerful as:

Bet you got a bit more out of that one.  Figurative language is always useful.  (Yes, I’m using terms I’m hearing in high school ELA.  I promise not to do it often.)

I was hoping to have more tips, but I really only have one more.  Try to write while feeling the emotion that you want to create.  If it’s an angry scene then get mad.  Love needs love.  Sadness needs sadness.  I’m not saying you need to go fully into the emotion, but you need to unlock your own empathy in order to put that little bit of your soul into the words.  This isn’t a guarantee because readers need to open themselves up as well, which is on their head.  Yet, you can still crack the barrier a bit and give them an entrance if you write with the proper emotions in mind.  This is especially true in the stronger scenes such as battles, romances, and arguments.

I almost forgot that I do have one empath and it’s a strange one because his power doesn’t work the way one expects.  Luther Grathan in War of Nytefall: Rivalry is a Dawn Fang with an empathy power.  He is able to taste the air and discern the emotions in the area with the strongest ones getting his attention. He has practiced enough to filter out the constant sensations and only reacts to something that seems out of place.  He never gets thoughts from this, but will try to make assumptions.  It was really a last minute power that I gave him in place of surface scan telepathy.  Overall, I like how this is both unique and not over the top, which feels like how empathy should be.  Emotions are strong, but the reading of them always strikes me as something needing a gentler touch.

Those are my thoughts on empathy.  Feel free to let me know what you think.  It could be on its use in fiction or reality.

Charles E. Yallowitz was born, raised, and educated in New York. Then he spent a few years in Florida, realized his fear of alligators, and moved back to the Empire State. When he isn't working hard on his epic fantasy stories, Charles can be found cooking or going on whatever adventure his son has planned for the day. 'Legends of Windemere' is his first series, but it certainly won't be his last.
View all posts by Charles Yallowitz →
This entry was posted in Thoughts and tagged author, emotions, empathy, fantasy, feelings, fiction, Luther Grathan, magic, psychics, War of Nytefall, Windemere, writing. Bookmark the permalink.

30 Responses to Writing Empathy as a Power or Ability