Almost Back to Normal: Progress Has Been Made

This feels like a whirlwind of a week and I can barely remember the beginning.  I believe I was going to put these into sections for easier reading too.  Well, let’s get this clown car on the road.

Return of the Laptop

The laptop finally came back Monday and I spent most of the afternoon testing it.  The speakers had to be replaced and now the sound works.  Poor thing kept getting pushed to do updates though.  I’d be writing along and suddenly get a message about needing to restart the system.  The worst was one that had a timer, which is the easiest way to make a guy panic.  Just writing along with nary a care in the world.  Suddenly, you have a countdown on the screen and feel like you’re in a James Bond movie.  The first few seconds are lost to confusion and then a few more to flapping your arms in a wild panic.  That second part might just be me.  Either way, the laptop is back and I can get back to writing at my normal pace . . . except:

It’s been so hot and humid here.  I know people live in areas that are worse, but it’s just oppressive here.  One reason is because the houses here were designed to retain heat for the New York winters.  Back in the day, you didn’t have to worry about this.  Now, it’s like Florida weather followed me here.  Even worse, I tend to work upstairs and that part of the house becomes a sauna.  Not quickly too, so I’ll be toiling away and gradually cook like that frog in boiling water thing.  I’ve had to retreat to the dining room and ask for the air conditioning by about noon, which still leaves me drained.  Nothing says fun like sweating up a storm and getting a ‘there goes the power bill’ comment when the air conditioner is turned on.  Really makes me miss how Florida operated. They knew you needed the AC on all day to keep things cool and avoid mold/mildew.  The power company didn’t take advantage of that like the ones here.  At the very least, you didn’t have to feel guilty about taking steps to avoid sweating enough to fill a public pool. 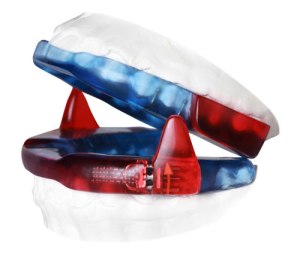 This is what I have to wear to bed for the rest of my life.  Went to pick it up on Tuesday and I have to go back for adjustments in 2 weeks.  It’s weird since the upper part feels like it’s yanking my teeth, which hurt for a few minutes after I take it off in the morning.  The bottom one is fine, but my tongue managed to pop it out on the first night before I went to sleep.  To explain, this pulls my jaw forward, which pulls my tongue away from my throat where it tends to bunch up when I sleep.  A big reason for this is because my tongue is too big for my mouth.  That’s the gist of it.  Maintenance isn’t too bad since I have to brush it with alcohol free mouthwash.  Haven’t done the weekly denture tablet cleaning yet, but I’ll do that Sunday.

So far, I can’t tell if it’s helping me sleep.  People can’t hear my snoring through the vents and my wife says it’s reduced.  Might never be gone completely, but it’s a gradual change of things.  Do I feel like I have more energy? Not really.  One of the issues is that I’m up at 5:30 AM on the weekdays to get things ready for my son’s summer school and get some work done before everyone wakes up.  I don’t set an alarm for this.  I just happen to wake up at this time and I can never fall asleep before 11 PM.  Weekends will be the main test because I can crawl back into bed after hitting the bathroom.  Fingers crossed that it works out.

There aren’t any other projects that I’m working on.  I finished a few chapters and only have 9 left of Derailing Bedlam.  Reese did get brought up in passing as long as Lloyd doing a ‘that should tide you over’ comment.  One thing I’ll always enjoy about this series is reacting to the audience through the characters.  Will Reese make another physical appearance? No idea.  We’ll have to wait and see.

Another thing I have to figure out is if I put a link to Protecting Bedlam on the next installment.  It seems weird to do it with a blog book.  I feel like it would be wrong to take it all off the blog and make it a published work too.  Does it make sense to list a ‘blog only’ on the list of previous rampages?  Not to mention I’m still not sure how I’m going to pull off another release.  Doubt and worry is still going strong.

Not much going on here.  I’ve fallen in love with the pretzel dog at Sonic and their shakes are delicious.  Thankfully, it’s not the easiest place to get to and you have to sit and wait for your food even if you’re taking it home.  So, I won’t be going too often.  This is going to work with me simply not saying no if somebody suggests going.

Next week is going to be a little busy, but not as bad as this one.  An event that I’ll mention next Saturday is looming.  There might be something else to mention here, but life has basically been covered above.  I really should do something about this notepad, brackets, cut out names, and Michael Jackson hat that’s been sitting in the corner all this time.  It was going to be a fun project with the kid.  Get him to help me choose the characters for each fight and then roll dice to see who will win.  Just haven’t gotten the chance because of homework or lack of privacy.  Doing stuff like this around people who already look at me strange tends to make the procedure more aggravating than fun.  Nothing like doing something quirky for a story and being questioned like you’re an idiot.

So, what’s up for this week?

Charles E. Yallowitz was born, raised, and educated in New York. Then he spent a few years in Florida, realized his fear of alligators, and moved back to the Empire State. When he isn't working hard on his epic fantasy stories, Charles can be found cooking or going on whatever adventure his son has planned for the day. 'Legends of Windemere' is his first series, but it certainly won't be his last.
View all posts by Charles Yallowitz →
This entry was posted in Goal Posts and tagged Bedlam, computers, goals, life, sleep apnea, Windemere, writing. Bookmark the permalink.

25 Responses to Almost Back to Normal: Progress Has Been Made