Posted on February 2, 2017 by Charles Yallowitz 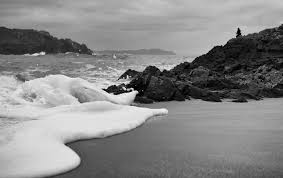 Is it the world around me
Or my own eyes have glazed?
Cataracts of pessimism
Forged by years of knowing
That life is no longer
Fun and games

I actually came up with this poem idea earlier in the week.  Thought I would remember it since I was driving, but it didn’t happen.  Couldn’t even write it down because dying in a fiery wreck isn’t on my bucket list.  Now, the day was overcast and gloomy because snow was coming.  This immediately put me in a funk, which was increased by the usual stuff that is well-documented here.  Gray weather always sinks my mood and it’s a slog to get any work done.  At least these days.

Anyway, I passed by something that I’ve been passing ever since I went to elementary school.  I don’t remember exactly what it was since I wasn’t paying full attention to anything other than where I had to make a left.  Yet, my mind perceived that the object wasn’t the right color.  I began noticing a melancholy coming over me and paid more attention to the colors around me.  Things didn’t seem as bright as they were when I was a kid.  I’m not talking about objects that had always been there.  Just the entire world lacked something.  Either that or I lacked it.

When watching my son explore the world, I wonder how vivid everything is since it’s all new to him.  I’m old enough to have let most things fade into the background.  Stop signs are only there when I’m driving.  Trees and flowers aren’t examined with curiosity like when I was a kid.  Things are simply there to me, but he sees nearly everything as a fresh experience.  Maybe this is just part of being a kid and a side-effect of having very little knowledge and experience.  Maybe things losing their vividness is part of life.

Yet, I do miss the sense of exploration and discovery, so maybe we aren’t really supposed to lose this part of ourselves.  I can see how it’s useful, but I also know how often people tell you to leave it behind.  Imagination, creativity, enjoying the world around you, and other ‘frivolities’ are either for kids or that 15-minute smoke break you get.  Nobody wants to hear somebody talk about the beautiful flowers.  They ask about your job.  It really is like a cloak of translucent gray has been cast over my adult world and it takes a lot of conscious effort to see through to the vividness.  Really makes me consider the possibility that we’re doing adulthood all wrong.

Charles E. Yallowitz was born, raised, and educated in New York. Then he spent a few years in Florida, realized his fear of alligators, and moved back to the Empire State. When he isn't working hard on his epic fantasy stories, Charles can be found cooking or going on whatever adventure his son has planned for the day. 'Legends of Windemere' is his first series, but it certainly won't be his last.
View all posts by Charles Yallowitz →
This entry was posted in Poems and tagged colors, growing old, growing up, happiness, life, living, poem, poet, poetry, sadness, vividness. Bookmark the permalink.