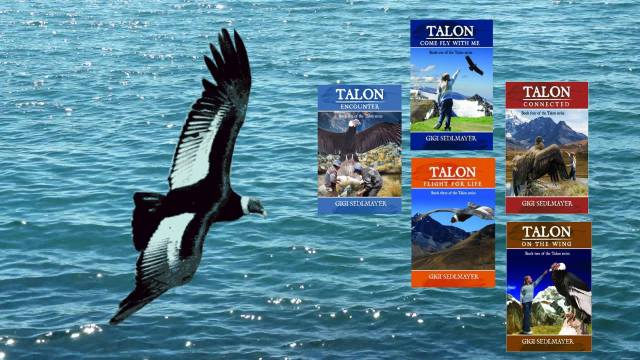 Nine year old Matica lives in a remote village on a dry plateau in the Andes of Peru. She moved to Peru when she was five with Australian missionary and schoolteacher parents. Because Matica is trapped in the body of a two year old, her growth handicap has caused her to be rejected by the local people and they would not accept her into their community or allow her to play with the children.

With patience and a sense of adventure Matica befriends a pair of condors. A strong bond and love develops between them.

Matica rescues the egg the condors, Tamo and Tima, are trying to protect from poachers and nurtures it to hatching. The egg hatches on her 10th birthday and she names the new fledging Talon.

Many adventures unfold, including her finally being accepted into the local community. And something totally unexpected…

This is the beginning of many incredible adventures with Talon and Matica. It is a story of hope, determination and love.

What Matica has dreamed ever since she first befriended the condors is actually happening.
And now the adventures begin.

Finally accepting Matica into their community because of an incredible event, the people from the village love seeing her with Talon and demand she tell them about her adventures with the condors.

Matica is now happy to be small because she can do what she has always dreamed of – fly. She is accepted and loved, and because she is so small can have incredible adventures with her beloved Talon. In the meantime, her friendship with Amos continues to grow…
In this book, she has scores of adventures and near disasters with Talon.

Matica and her family are planning a holiday in Australia. She and her father travel to Cajamarca to organise supplies and air tickets. Although she misses her condors on the walk to the city, she sees wondrous scenery, rainforest, animals and birds.

On their walk, disaster strikes. Her father is seriously injured on the way home after being bitten by a huge spider and contracts a high fever. Not knowing what to do, Matica calls to her condors for help. The wait until they arrive is the hardest thing she has ever had to endure.

Journey with Matica through her adventures, laughter and tears. Enjoy the feeling of friendship, love and camaraderie between Matica and her condors, Talon, Tamo and Tima.

TALON, CONNECTED is the fourth book of the epic adventure series TALON.

Matica lives in the small village of Pucara with her brother, mom and dad, who is recovering from a near-death experience. Her 11th birthday is coming up and the things she is about to encounter proves she is very brave.
Events take a sudden turn when she is invited to see Elcano, the very old and frail father of the village elder Pajaro. Not once, but three times he summons her. She is afraid of him but he fascinates her. He calls her ‘his daughter’ Why? The amazing things he is about to tell her could be life-changing, things she had never thought about.
Matica nearly jumps out of her skin at what she is told. ‘Who me?’ she questions herself. ‘Really me?’

Will Matica be able to cope with these life-changing disclosures?
In the midst of all this, the poachers are back, looking for eggs and birds – and Talon.

TALON, CONNECTED is far more than a kids’ story. It is a story about growing up, friendship, and the challenge of moral choices and respect. Ride along during the ongoing adventures of Matica and her best friends, the condors Talon, Tamo and Tima, characters many readers already know and have learned to love.

The poachers are back – and they are looking for Talon! They are doing everything in their power to capture him, and if they can’t get him alive, will kill him. Determined to get him at all costs the poachers run up against the might and will of Tamo, Tima and Talon.

It is war. The poachers against the condors, Matica and the Indians – with the poachers even taking hostages to win the war.

With the help of Tamo and Tima, Talon and Matica do the impossible knowing they have to capture and stop the poachers or they will be back.

Between the poachers shooting at the condors, the crows playing their part, and Tamo being shot and injured, Matica goes above and beyond to help her beloved condors.

Action-packed from beginning to end, Talon Encounter will keep you on the edge of your seat. 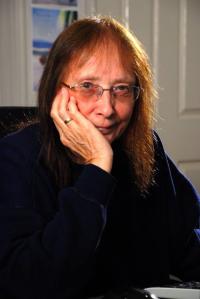 Gisela (Gigi) Sedlmayer was born on 19 May 1944 in Potsdam, a suburb of Berlin in Germany.

Her family escaped to the West just before the infamous wall went up. They moved around in Germany until finally settling in Munich where Gigi studied architectural drafting and met Albert in 1965, marrying in December 1967. She worked as a civil draftsperson in various private consultancies in Munich.

May 1975, Gigi and her husband moved to New Zealand. Because of language challenges, she started a handicraft business. As a specialty, she made colourful parrots of which she sold thousands in a few years.

September 1992 they moved to Australia.

November 1993 Gigi was diagnosed with cancer. By the grace of God she survived it and seeing her husband writing the story about the adoption, she started to write short stories for competition since her English became increasingly better.

Albert taught her how to use a computer and she wrote many short stories. She entered them in competitions and often got very good reports back, which gave her confidence to go on writing. One day the idea for the TALON series came to her and she spent the next several years bringing the story and the characters to life.

She now loves writing and spends most of her time at the computer, developing new story lines. She also loves travelling, 4×4 touring, swimming, gardening, handcrafting, reading, fossicking and enjoys good adventure DVD’s or going to the movies.

Charles E. Yallowitz was born, raised, and educated in New York. Then he spent a few years in Florida, realized his fear of alligators, and moved back to the Empire State. When he isn't working hard on his epic fantasy stories, Charles can be found cooking or going on whatever adventure his son has planned for the day. 'Legends of Windemere' is his first series, but it certainly won't be his last.
View all posts by Charles Yallowitz →
This entry was posted in Guest Blogging, Spotlight and tagged action, action adventure, adventure, advertising, amazon, Amazon Kindle, Andes, author, birds, birds of prey, blogging, books, children's stories, condors, ebooks, fiction, guest blogging, kindle, marketing, Peru, promotions, series, spotlight, survival, Talon. Bookmark the permalink.

5 Responses to The Talon Series by Gigi Sedlmayer #asmsg #adventure