Posted on September 3, 2021 by Charles Yallowitz

As the vampires battle in the shadows, a new enemy appears to drag them into the light!

The paladins of Windemere have had enough!

As the Vampire Civil War heats up, mysterious murders are being committed against members of every holy order.  All signs point to the culprits being vampires, which has resulted in the creation of a unified paladin army. To protect his people, Clyde must find the killers before the holy warriors unleash their purifying crusade. It is a battle against frustrating obstacles as the war inches closer to mortal civilization and ambitious new allies join Nytefall.

One slip is all that is needed for the secret of the Dawn Fangs to be revealed.

Curiosity piqued? Check out this teaser!

The urge to move faster nearly overtakes Lost’s common sense, but she reminds herself that adults are supposed to be patient. As if her mind is trying to undermine her actions, she is on the verge of whistling the first tune that slips into her thoughts. Sucking in her lips, the Dawn Fang pierces them with her fangs to stop them from causing trouble. The pain makes her eyes water and she squishes mud in her hands to hold back a scream. Reaching out with her telepathy, she tries to locate her targets while she lets her unfocused thoughts run their course. A distant prayer to Ram the War God causes her to change her direction and she takes a deep breath to regain her composure. With the paladins so far away, Lost moves a little faster, but stops short of giving in to her silly, impatient urges. Seeing the edge of the tall grass, she drops again and uses her elbows to pull herself along like she remembers seeing Titus do on several missions. As she comes out of her cover, the bright sun blinds her, so she is unable to stop herself from banging into something metal, which falls onto her back.

“Get off of me!” Lost shouts before telekinetically hurling the object into the river. She scrambles to her feet and freezes at the sight of six paladins standing in her path. “Such shiny and pretty armors, you have here. I really like the guy with the big helmet. Is that an ostrich feather? I keep meaning to ride one of those again. So, nice day for a walk. This is bunny who is totally unable to fly. That’s why he’s on my head. Your friend seems okay, so there’s absolutely no reason for us to spend any more time together. Bye!”

“You must be Lost,” Lord Adam says through his great helm. He takes a step forward and holds out a diamond fused to a bronze chain. “We are well aware of you and your abilities, monster. That is why I travel with this. None of your mind tricks will work on those who stand in my presence. Even your keen senses are tricked by the spells designed specifically to thwart your actions. Be honored that we went to so much trouble to design items with you in mind. No other Dawn Fang has earned so much individual attention.”

“That’s kind of creepy,” she replies as she steps back. Seeing weapons getting drawn, she stops retreating and playfully slaps at the mud with her bare feet. “Needed to wash some gunk out from between my toesies. Well, this is awkward. You brought me such a pretty present and I don’t have anything for you. Bunny says that I need to work on my manners. There’s really no need for violence. Dawn Fangs are mostly good. Just like mortals, we have some bad ones, but we’re all individuals like all of you. I mean, we all eat soup the same way, right? I really hope you all use spoons for that comparison to work.”

“Abominations such as you-” the paladin begins to announce.

“Look at the naked heretic!” she shouts while pointing into the distance.

All of the holy warriors, except for Lord Adam, turn to see what Lost is gesturing at, so she flings mud at their leader’s helmet grating. The man coughs and hacks as the Dawn Fang sprints back to the river and launches herself to the other side. A quake meets her as she lands and she nearly topples onto her side, but manages to stumble along. Glancing over her shoulder, she does not see any of the paladins in pursuit and considers slowing down to get her bearings. Lost’s eyes go wide when she sees the powerful steeds rise into the air, arch over the river, and land in a perfect line that immediately charges ahead. The open plains allow the warriors to move at full speed, which is only slightly slower than the sprinting Dawn Fang. They hurl spells and glowing weapons, which return to their hands, but the attacks never hit their mark. Those that come close are deflected by a telekinetic shield, which repeatedly shatters upon impact thanks to Lord Adam’s diamond weakening her even from a distance. With the relic defending the paladins’ minds and muffling their hoofbeats, she has to repeatedly look over her shoulder to make sure none of them have disappeared. To her relief, they never break formation and she gets a sense of their attack pattern, which never falters.

Get a copy of this vampire action adventure for
99 cents on Amazon!
Help spread the word by adding it on Goodreads! 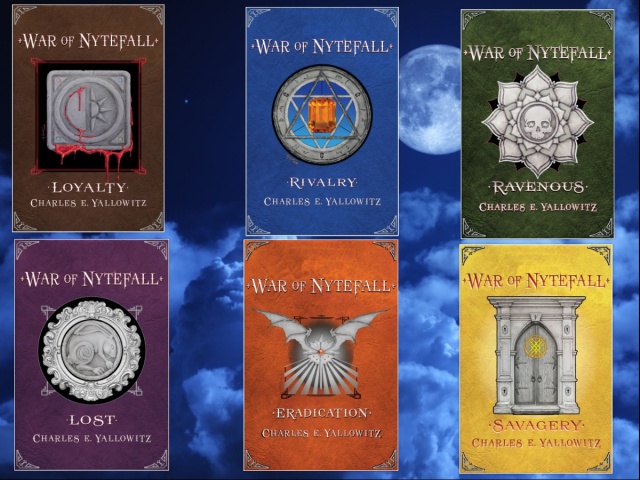 Charles Yallowitz was born and raised on Long Island, NY, but he has spent most of his life wandering his own imagination in a blissful haze. Occasionally, he would return from this world for the necessities such as food, showers, and Saturday morning cartoons. One day he returned from his imagination and decided he would share his stories with the world. After spending many years fiddling with his thoughts and notebooks, he decided that it was time to follow his dream of being a fantasy author. So, locked within the house with only pizza and seltzer to sustain him, Charles brings you tales from the world of Windemere. He looks forward to sharing all of his stories with you and drawing you into a world of magic.

Charles E. Yallowitz was born, raised, and educated in New York. Then he spent a few years in Florida, realized his fear of alligators, and moved back to the Empire State. When he isn't working hard on his epic fantasy stories, Charles can be found cooking or going on whatever adventure his son has planned for the day. 'Legends of Windemere' is his first series, but it certainly won't be his last.
View all posts by Charles Yallowitz →
This entry was posted in War of Nytefall and tagged 99 cents, action adventure, Amazon Kindle, anarchy, Clyde, Dawn Fangs, ebook, epic fantasy, fantasy, magic, new release, penultimate, series, sword & sorcery, vampires, War of Nytefall, Windemere. Bookmark the permalink.

10 Responses to ‘War of Nytefall: Anarchy’ Available on Amazon for #99cents! #vampires #fantasy