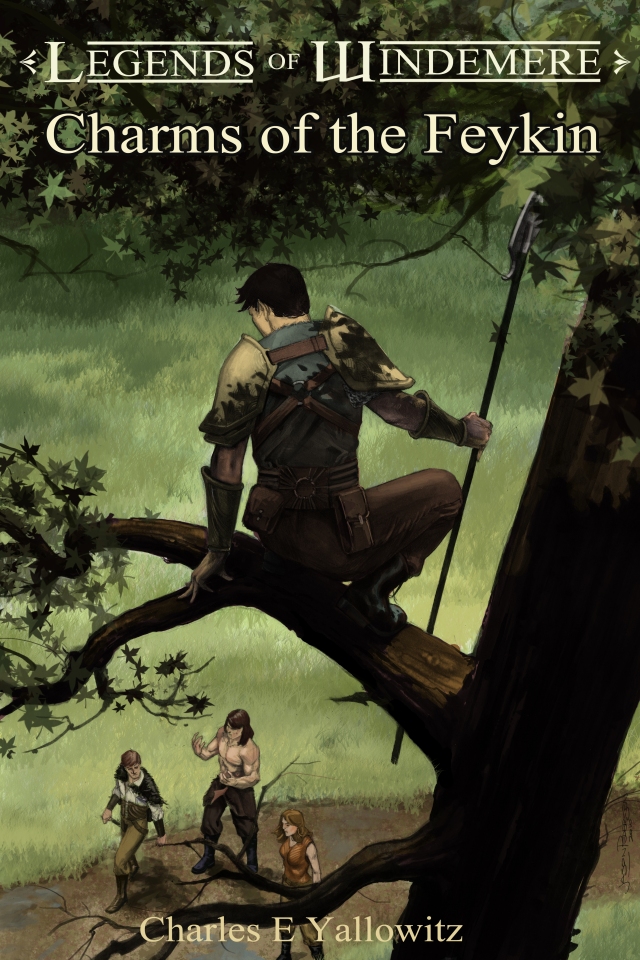 I had lot of fun writing Charms of the Feykin.  I didn’t give the continent of Ralian a lot of jungle regions, so this was a chance to explore a new region.  Just being able to describe the southern jungles was a thrill.  Small note:  I never gave the area a name beyond the Southern Jungles.  A reason was that the tribes and those outside all made different names for it, so most still to the general term.

The small force of Feykin ready their weapons as they stand above a circular valley that is fringed with winding mist. The midday sun does little to break through the hazy curtain that hangs in the warm air. Apple trees cover most of the area, the sea of branches and leaves only breaking for a solitary lake on the orchard’s eastern side. A shadowy beast can be seen taking a drink, but it lumbers out of view before the nervous invaders can get a clear look. Black parrots and frilled hornbills hop around the canopy in search of berries and nuts that are entwined with the treetops. The birdsongs are mournful and lilting, which matches the eerie atmosphere that becomes more blood-chilling by the second. A herd of short-antlered deer roam through the interior of the valley, their gray bodies blending with the thicker parts of the fog to give them a spectral appearance. Their darting movements put the Feykin on edge since the warriors are unsure if a shadow is a deer, a predator, or a ghost.

“Do you see any guards?” Sari asks as she stands next to Dariana. The women glance back at the ten jittery hunters who are waiting for orders. “It’s strange that the Order didn’t leave anyone to guard this place. It must mean there are traps and monsters in there. I’ll go first while you take up the rear. Fizzle can watch us from above.”

“You should have brought more people,” Dariana replies while stretching her legs. She pauses with her foot above her head, a malevolent laugh tickling her mind. “Something evil and tortured is down there. The two of us and Fizzle are strong, but I worry that the Feykin will be easy prey. Strength in numbers would have been a helpful phrase to live by, Sari. Was getting here before Delvin reached the prison so important that you put us in great risk?”

“I only said that to annoy him,” the gypsy admits with a smirk. A sharp whistle causes the spear-wielding men and women to jump, their booted heels clapping together in unison. “The truth is that I didn’t think we needed an army for this. We only have to reach the middle, set some fires, and retreat. At least I took a group that has been fighting together for years. They’ll be more than enough.”

“Fizzle not like this,” the drite states, the scent of apples making him drool. A howl drifts from the orchard, so he responds with a booming roar. “We not wanted. Trees give warning. Animals on edge. No sure why. Fizzle worried.”

Sari pats the drite on the head and smiles, her cold eyes not joining in the comforting expression. “It’s because they know why we’re here. These things have been trained or summoned by the Order to protect the orchard. They probably sense our intent, which means we’ll be depending on you to protect us from above. Let’s go before it starts getting dark and we find ourselves at a disadvantage.”

With their Queen leading the way down the fern-covered incline, the Feykin march in pairs and keep their attention on the orchard. Hidden rocks cause the warriors to stumble, which ruins their neat formation by the time they get halfway to their target. One of them is unfortunate enough to step into a rabbit hole, which causes her to fall beneath the ferns. For several agonizing seconds, the woman’s allies search for her and worry that they are already under attack. When she reappears a few yards ahead of Sari, the warrior sheepishly limps back to her place in line. From that point on, the Feykin use their spears to test the ground in front of their feet. It makes their progress a lot slower, but they feel better about not having to worry about twisted ankles and broken legs.

Taking up the rear, Dariana tucks her hands into her pockets and puts on the façade of someone who is completely calm. There is a familiar psychic pattern in the valley that the telepath struggles to place, but the answer repeatedly eludes her. Glancing at Fizzle, she can sense that he shares her anxiety and uncertainty about the situation. The way he flies is jerky and the drite sporadically changes altitude as if he is unsure of what he should do. Only Sari exudes real confidence and excitement, the gypsy dreaming about laying waste to the orchard. It is a blind, disturbing happiness that makes Dariana even more worried about what they are walking into.

His tail straightening behind him, a sudden thickening of the air causes Fizzle to dive at the procession and tackle Sari to the ground. A blast of razor-edged mist lances out of the foggy barrier, which transforms into a domed shell that encompasses the orchard. More of the projections erupt from the aggressive shield, which drives the Feykin back. Taking up the rear, the injured woman is unable to keep up with her friends and is impaled through the head. A clawed hand bursts from the end of the lance and yanks the body into the mist where it is dissolved. Sari and Fizzle struggle to dodge the attacks, the pair moving backwards to keep an eye on the incoming spikes. Landing on the gypsy’s head, the drite casts his own shield spell that deflects the misty protrusions. Cracks form in the rainbow-tinted barrier, but it gives them enough time to turn around and sprint out of range. No longer sensing the intruders, the fog returns to its idle state and seems to mockingly make itself thinner than before.

“Now we know why there aren’t any guards,” Sari says.

Charles E. Yallowitz was born, raised, and educated in New York. Then he spent a few years in Florida, realized his fear of alligators, and moved back to the Empire State. When he isn't working hard on his epic fantasy stories, Charles can be found cooking or going on whatever adventure his son has planned for the day. 'Legends of Windemere' is his first series, but it certainly won't be his last.
View all posts by Charles Yallowitz →
This entry was posted in Charms of the Feykin, Legends of Windemere, Teaser Tuesday and tagged author, Dariana, dragons, Drite, epic fantasy, excerpt, fantasy, fantasy series, fiction, Fizzle, high fantasy, Legends of Windemere, magic, Sari, sword & sorcery, teaser, teaser Tuesday, tuesday, writing. Bookmark the permalink.

4 Responses to Teaser Tuesday: Beyond the Fog #fantasy #adventure