New Orleans of the Shattered States

Posted on January 25, 2017 by Charles Yallowitz 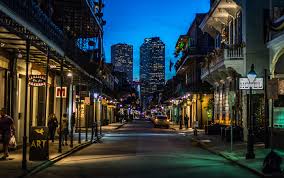 Previously, I stated that the newest Bedlam story got kicked off by the mention of Mardi Gras and New Orleans.  The idea that the party would start and never stop after the collapse was intriguing.  Not enough for a full story, but I liked having it as one of the bigger obstacles.  It also makes New Orleans a place that can be returned to because it stands out amongst the rest of the country.  Future stories can have Cassidy and Lloyd return here if they’re in trouble.  Still, it is out of the way, which is why I had it be part of the journey instead of the starting or final destination.

My knowledge of New Orleans is very limited even after reading up on it.  It’s certainly a city that one has to visit in order to get, which is a luxury I don’t have.  I talked to a few friends who have been there to get insight and run my ideas by them.  There were a lot of interesting stories, which is what I took from this. New Orleans feels like a city of stories, which are either starting or ending there.  Some continue outside the borders while others remain within.  Either way, that’s one of the big takeaways.

I did decide to avoid going too far into the city.  Google Maps helped with basics, but I felt that I couldn’t give this famous city justice.  Especially since the Shattered States tends to be over the top and even teasing in regards to the real world sources.  I still went that route to some extent.  Everything is paid for with beads within the more central part of the city, which has become a constant party.  The outer regions are a mix of slums and suburbs that survive on what they can grow and make.  They will send people in with beads that they either find or can get for supplies they can’t find outside.  Personally, I like the combination and it can lead to other stories if I ever branch out.  Maybe friction between the inner and outer denizens.

This isn’t including the vampire packs that are running around the area.  Each one has their own territories and there is organization, but they really are nothing more than another set of gangs.  Of course, they aren’t really vampires and I had a lot of fun thinking of which system they’re based off of.  In the end, I see them in a similar vein as the Wyoming cannibal tribes.  Each pack follows a different style of vampire, which can make for some comedy.  I didn’t get to investigate this very much because Cassidy and Lloyd are always passing through.  Another potential story for later.  I was going to include it in one idea, but that story had to get scrapped due to current events.

Overall, New Orleans was a curious challenge.  I didn’t have the knowledge or confidence to go very far with it.  Yet, I couldn’t leave it out.  How can you have your heroes travel along the southern coast from Dallas to Miami and skip one of the biggest cities?  I could have had it wiped out or too dangerous to touch on, but that felt like a cop out.  This was an important step since I’m still toying with the idea of making other stories that take place on Earth.  Keeping everything in NYC and the other places that I know doesn’t work very well.  I mean, having every hero and villain in the same city when there’s an entire world to play with?  Gets rather ridiculous after a while.

Charles E. Yallowitz was born, raised, and educated in New York. Then he spent a few years in Florida, realized his fear of alligators, and moved back to the Empire State. When he isn't working hard on his epic fantasy stories, Charles can be found cooking or going on whatever adventure his son has planned for the day. 'Legends of Windemere' is his first series, but it certainly won't be his last.
View all posts by Charles Yallowitz →
This entry was posted in Chasing Bedlam, Crossing Bedlam and tagged author, beads, Cassidy, Chasing Bedlam, Crossing Bedlam, dystopia, fiction, Lloyd, Mardi Gras, New Orleans, NOLA, science fiction, Shattered States, vampire hunters, vampires, writing. Bookmark the permalink.

19 Responses to New Orleans of the Shattered States