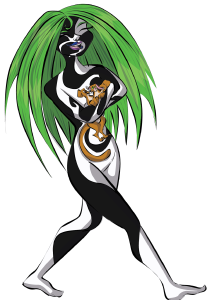 It’s only right that I talk about Yola Biggs before Merchant of Nevra Coil is released next month.  She causes everything that happens and gets a good evolution as well as revealing more about the world of the gods.  So you know the Chaos Goddess has to have an interesting origin.

*checks notes from long ago*

Where in the world did this nutcase come from?

Seriously, I don’t know what possessed me to create Yola or put a goddess on the side of the Baron.  She didn’t really have a purpose at the beginning beyond transporting other villains and defending the Baron.  Kind of like an overpowered limo and bodyguard rolled into one.  There isn’t even a hero that she matches up with like the others.  Unless I got it in my head to pit Yola against Timoran or Dariana.  Nothing about that in the old notes, so what was I thinking?

It really doesn’t matter because Yola is responsible for a lot of my god-based decisions. I created the Law of Influence to explain why the gods are restrained in their actions and why Yola is not with them.  She’s an exile who broke the one rule and ran away instead of facing a trial.  The Baron happily took her under his protection since it meant he had a powerful ally.  By the time I put her into the story, I had only a basic idea of her history and she’s been bouncing around the background for a while.

Then something changed.  I found a sense of freedom when I wrote Yola scenes because of her level of power and loopy personality.  This led to me figuring out a way to give her more to do.  The challenge was that she couldn’t spend much time outside of Shayd because the other gods would eventually come for her.  Even her unique and wild powers of reality manipulation couldn’t save her from the other gods.  What was the answer to this issue?  Well . . . that would be The Merchant of Nevra Coil.

Charles E. Yallowitz was born, raised, and educated in New York. Then he spent a few years in Florida, realized his fear of alligators, and moved back to the Empire State. When he isn't working hard on his epic fantasy stories, Charles can be found cooking or going on whatever adventure his son has planned for the day. 'Legends of Windemere' is his first series, but it certainly won't be his last.
View all posts by Charles Yallowitz →
This entry was posted in Character Origins and tagged author, chaos, character, characters, epic fantasy, fantasy, fiction, goddess, high fantasy, Legends of Windemere, puppies, series, sword & sorcery, villains, Windemere, writer, writing, Yola Biggs. Bookmark the permalink.

13 Responses to Character Origins: Yola Biggs the Goddess of Chaos