Happy Anniversary to ‘When Stars Die by Amber Skye Forbes’

Posted on October 22, 2014 by Charles Yallowitz 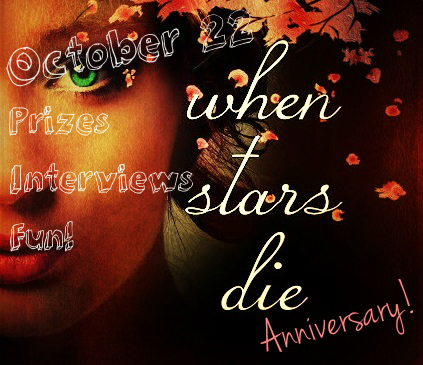 Amber Skye Forbes is a dancing writer who prefers pointe shoes over street shoes, leotards over skirts, and ballet buns over hairstyles. She loves striped tights and bows and will edit your face with a Sharpie if she doesn’t like your attitude. She lives in Augusta, Georgia where she writes dark fiction that will one day put her in a psychiatric ward…again. But she doesn’t care because her cat is a super hero who will break her out.

“Yet, even when stars die, they leave a lasting impact through their light, their diamond brilliance as they scatter their material to form new stars. When people die, they leave the same impact with the footprints they leave on people’s hearts. Even the ones who feel insignificant go out, leaving behind dust that can nourish the world anew.”

Amelia Gareth’s brother is a witch and the only way to save her family from the taint in his blood is to become a professed nun at Cathedral Reims in the snowy city of Malva. However, in order to become professed, she must endure trials that all nuns must face.

Surviving these trials is not easy, especially for Amelia, who is being stalked by shadowy beings only she can see. They’re searching for people they can physically touch, because only those they can touch can see them. Amelia soon learns why she is being stalked when she accidentally harms her best friend with fire during the third trial. Fire is a witch’s signature. The shadows are after witches.

Now Amelia must decide what to do: should she continue on her path to profession knowing there is no redemption, or should she give up on her dream and turn away from Cathedral Reims in order to stop the shadows who plan to destroy everything she loves?

Also, check out the Blurb and Cover from the upcoming Book 2 of the ‘Stars Trilogy’, The Stars Are Infinite

Alice Sheraton is slated to be executed for being a witch; however, her father spares her. He sends her to Finight Hill, a safe house for witches. Here a Shadowman begins to pursue her, and from this Shadowman she learns she has been bound since birth with a terrible fate: either be a martyr to free witches from their misery, or choose to live knowing her existence will bring on more chaos.

Charles E. Yallowitz was born, raised, and educated in New York. Then he spent a few years in Florida, realized his fear of alligators, and moved back to the Empire State. When he isn't working hard on his epic fantasy stories, Charles can be found cooking or going on whatever adventure his son has planned for the day. 'Legends of Windemere' is his first series, but it certainly won't be his last.
View all posts by Charles Yallowitz →
This entry was posted in Spotlight and tagged Amazon Kindle, anniversary, author, blogging, book blast, ebooks, fantasy, fiction, ghosts, historical fiction, kindle, magic, paranormal, romance, supernatural, victorian, witches, writing. Bookmark the permalink.