Is Weather Important to Stories?

Posted on December 9, 2020 by Charles Yallowitz 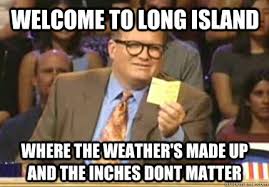 Many of us remember Snoopy starting a book with ‘It was a dark and stormy’ night.  In fact, I’ve seen this get used as a ‘what not to do’ lesson.  I believe it’s that you never start with the weather, which is a guideline that I’ve seen broken many times.  Some of us might have heard that a conversation is dead once you bring up the weather too.  There really is a lot of rules that make weather out to be a terrible subject. This makes me wonder if weather is really important to stories.

For my stories, I use weather to help set the stage for what is about to happen.  I don’t depend on it alone for setting, but it is a piece of the world-building puzzle.  If I mention that there is snow then that can explain slow progress when walking, characters shivering, and other cold-related events.  I try not to harp on the weather, which is where I think some people go wrong.  You can only mention the storm so many times before it gets a negative reaction.  Of course, it’s much easier to use bad weather than good because that’s what can really influence things.  A nice, sunny day doesn’t really hit with a lot of impact when compared to lightning or a tornado.  Still, you can use it to show that it’s relaxing scene, so it shouldn’t be discounted outright.

Some add weather without realizing it, but I’ve met more who try to leave it out.  I understand why because people do have this weird aversion to it.  It’s surprised me how often a reader will be chugging along and then scowl because there’s a mention of it raining.  This is mostly when it starts a chapter because of the idea that you shouldn’t start with weather.  Seems that belief has become more mainstream somehow.  Authors are more likely to do this from what I can tell.  Not all of us and it could be a minority, but it’s enough that I run into fairly often.

A funny thing is that this seems to not be the case for more visual mediums like movies, comics, and television.  There are times where it feels like the opposite.  So many scenes begin with nightmarish weather and that gets the blood pumping.  Maybe people aren’t as good at imagining these things when they read it.  I know I tend to underestimate storms when I dream them up, so a real one always catches me by surprise.  The sheer power of wind and water in their various forms/levels is shocking if you aren’t faced with it fairly often.  So, there could be a mental block that authors have to get around, which is possible if you ease into it.  That means, you don’t start with the weather, but you can build up to it and then continue rising to sandwich it between the rest of the world-building.

One last thing I will mention in terms of weather in fiction is that you can shake it up by researching unique patterns.  In fantasy, I can do a lot of wild stuff with magic, but I’ve learned that there are really strange ones in reality too.  It can range from the fairly well-known ball lightning to incidents of raining fish.  You have many events that involve smog, combinations of weather, and some of the lesser used patterns.  Apparently, fire tornadoes are a thing too in some places.  Just type what you’re thinking of or wander around various sites to see if any of the real, but strange events catch your attention.  It can really liven things up and separate them from the basics that we tend to use.

So, what do you think about weather in fiction?  Is it a really minor piece of the big picture?

Charles E. Yallowitz was born, raised, and educated in New York. Then he spent a few years in Florida, realized his fear of alligators, and moved back to the Empire State. When he isn't working hard on his epic fantasy stories, Charles can be found cooking or going on whatever adventure his son has planned for the day. 'Legends of Windemere' is his first series, but it certainly won't be his last.
View all posts by Charles Yallowitz →
This entry was posted in Thoughts and tagged clouds, fiction, hail, mood, rain, scenery, setting, sleet, snow, storms, sun, thoughts, weather, wind, writing. Bookmark the permalink.

25 Responses to Is Weather Important to Stories?