Posted on September 27, 2019 by Charles Yallowitz 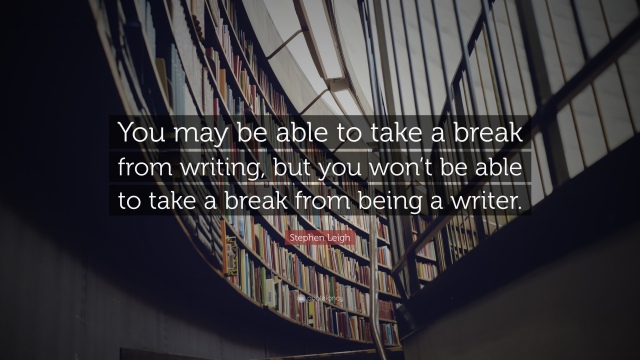 After having a very busy summer and nearly jumping right back into the TA job, I haven’t had much writing time.  People might notice that I haven’t been able to get to my books for most of the year.  Finishing one is a miracle and I can only imagine how rough it’s going to be to edit it.  Don’t think War of Nytefall: Eradication will get a December release like I’d hoped.  There have simply been too many breaks that were caused by a long list of events.

Now, I’ve talked about this during my Saturday posts and I usually get a lot of suggestions that don’t really work out.  I’ve come to realize that my schedule is filled pretty well and I only get quiet time when I’m exhausted.  Moments when I do get time and have the energy can be undone by people who don’t really acknowledge my writing as anything more than an unimportant fancy.  This was easy to contend with when I was a full-time author, but not when I have a main job that takes most of the day.  The bandits are quite successful at derailing my mental train.

I’ve taken to puzzles to try to relax and I do reading when I can.  These help get me through the breaks with some level of mental stimulation.  If I can get to an outline then I’m doing even better, but that’s rarely the case.  I tried to bring a notebook to the summer job and I simply couldn’t find a moment to work with it.  Didn’t help that I couldn’t keep it near me while I worked, so I didn’t bring my satchel either.  I gave up on trying this early on, so I focused on the job.  Before anyone asks, I couldn’t use an app on my phone because there’s a very strict ‘no phone’ policy.  Scrap paper was out too.  I jotted down a few passwords that I got for some of the older games and a kid doodled on them at some point.  You get what I’m saying here and I’ve probably said it before.

So, here are some questions:

Charles E. Yallowitz was born, raised, and educated in New York. Then he spent a few years in Florida, realized his fear of alligators, and moved back to the Empire State. When he isn't working hard on his epic fantasy stories, Charles can be found cooking or going on whatever adventure his son has planned for the day. 'Legends of Windemere' is his first series, but it certainly won't be his last.
View all posts by Charles Yallowitz →
This entry was posted in Questions 3 and tagged advice, answers, author, break, pause, q&a, questions 3, writing. Bookmark the permalink.