Posted on September 17, 2019 by Charles Yallowitz 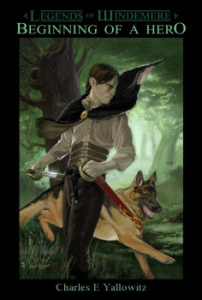 Going back to the beginning with a teaser from Legends of Windemere: Beginning of a Hero.  Been a long time since I showed anything from this.  Keep in mind that it’s Free on Amazon and Smashwords.  A great introduction to my biggest series both to date and ever.  Although, you can really see how far I’ve come here over the years too.  Enjoy.

The small group travels about sixty yards down the stairs before Nimby stops them. It is a wordless gesture with his hand that causes everyone to freeze where they are. The halfling straddles a step, examining it closely. He eyes the step with such seriousness that his friends begin to get nervous. The halfling slowly turns his head to look at the next step, gliding his foot along its surface until his toes points down the stairs. Using his hands, he tries to measure the suspicious step.

“What is it?” Luke asks from the back of the group.

“This step is about an inch wider than the others,” Nimby whispers, bending down until his nose is almost touching the step. “It makes me think that there is a trap here. The mechanics involved in a step trap tend to make the trigger step a different size than the others. Not sure what the switch does though. I’ve seen traps like this before and they don’t always do the same thing. Thankfully, all of them are set off the same way. It’s a basic pressure plate and pulley system, which means we only have to hop over the step to avoid it. Kind of strange that such a basic trap is in this place. The person who set this up might have been a great caster, but they didn’t have any imagination with their trap making.”

“There could be more to it. Let me take a look,” Fritz offers. The gnome straddles the step with Nimby before a metal clink is heard from the walls. Everyone holds their breath as the two steps that Fritz and Nimby are standing on quickly sink into the ground.

“A false pressure plate flanked by two perfectly hidden plates,” Nimby says with a nervous smirk. “Well, that’s a nice twist to a classic. I am very impressed”

A wet crash is heard from the top of the stairs and they can hear liquid splashing down the stairs. All of them cover their noses when a foul stench wafts down the staircase in front of whatever liquid that has been released. Luke quickly sheathes his sabers and Aedyn puts his staff over his shoulder before they each pick up one of their diminutive friends. The half-elves break out into a mad sprint down the staircase.

“Hey, guys! I know that smell! It’s oil!” Fritz shouts. He maneuvers himself, so that he is on Aedyn’s back. The gnome takes the priest’s staff, making it a little easier for Aedyn to run.

“What does that mean exactly?” Luke replies, ricocheting off a wall when the stairs make a suddenly twist to the left. He has Nimby tucked under his arm while he moves as fast as he can. He can hear Aedyn behind him almost trip and fall down the stairs when he comes to the twist.

“Not to make anyone panic, but oil is flammable!” Nimby shouts over the growing sound of rushing oil. “I distinctly remember there being torches on the walls.”

“By Durag’s light, do not tell me such things!” Aedyn yells in a panic. “If you do not have any good news then please be quiet!”

Luke is so busy running that he is unable to avoid a step that is slightly darker than the others. He steps on it with all of his weight, making it sinks into the ground. This time the torches along the wall turn upside down, spilling fiery coals onto the dusty steps. The staircase erupts into flames behind the small group as they fight to run faster. They can feel a wave of heat hit them from behind as the ankle-high river of oil becomes a rolling torrent of fire.

“Take Nimby and run ahead, Aedyn! Maybe I can do something to slow the trap!” Luke shouts. He turns in time to see the flood of flaming oil turn a corner far behind them. Like a liquid fireball, the flaming oil grows bigger and bigger, eating up the fiery coals along the steps.

“Care to repeat that idea, hero?” Aedyn asks with a nervous laugh.

Luke gulps and tightens his grip on the halfling. “Maybe another time. How long are these damn stairs anyway?”

Luke makes a sharp turn and sees a sealed door ahead of them. He is about to burst into a flood of curses when he hits another stair switch and the door begins to open. The glitter of gold and gems nearly blinds him as a fresh breeze enters the stagnant tunnel. Luke roars as he hurls Nimby at the opening, desperately hoping to get the halfling out of harm’s way. He watches Nimby land headfirst on a pile of gold before turning to see where Aedyn and Fritz are.

“This is really bad!” Fritz urgently shouts. “Fire gets attracted to areas that have a sudden intake of fresh air! Move faster, Aedyn!”

Aedyn barely notices that he is passing Luke as he pushes his legs into a final sprint for safety. The priest dives through the opening, turning in time to see the roiling fireball charging down the stairs faster than ever. It licks at Luke’s heels as he hurls himself through the opening. Unlike his friends, Luke has no time to jump behind anything when the fireball blasts into the chamber. It rolls along the ceiling of the airy chamber for a few minutes until the door slams shut.

The Action Continues in
Beginning of a Hero!

Charles E. Yallowitz was born, raised, and educated in New York. Then he spent a few years in Florida, realized his fear of alligators, and moved back to the Empire State. When he isn't working hard on his epic fantasy stories, Charles can be found cooking or going on whatever adventure his son has planned for the day. 'Legends of Windemere' is his first series, but it certainly won't be his last.
View all posts by Charles Yallowitz →
This entry was posted in Beginning of a Hero, Legends of Windemere, Teaser Tuesday and tagged Aedyn Karwyn, allies, amazon, author, Beginning of a Hero, elves, excerpt, fantasy, fiction, fire, friendship, Fritz Warrenberg, gnomes, halflings, kindle, Legends of Windemere, Luke Callindor, magic, Nimby, oil, priests, running, series, teaser Tuesday, thieves, warriors, writing. Bookmark the permalink.

10 Responses to Teaser Tuesday: At Least They Tried #fantasy #adventure

Leave a Reply to The Story Reading Ape Cancel reply