Posted on September 10, 2019 by Charles Yallowitz 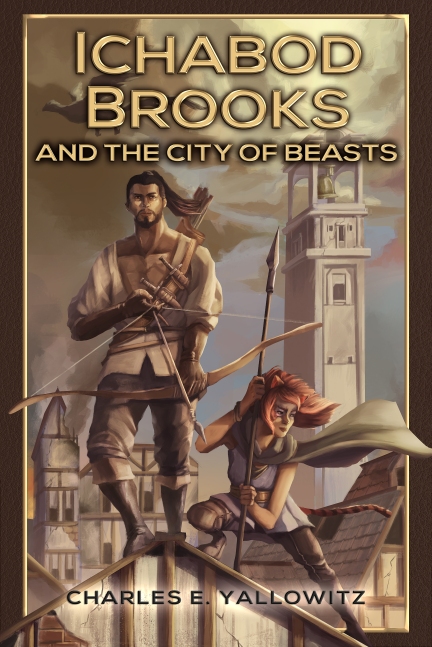 Ichabod Brooks & the City of Beasts (Cover by Nio Mendoza)

This is going way back!  Before The Life & Times of Ichabod Brooks, I gave our favorite adventurer a smaller outing.  It was a single short story that I put out (and still have out) for 99 cents.  I figured it was a great way to introduce people to him, my writing style, and Windemere.  It’s called Ichabod Brooks & The City of Beasts.  Feel free to check it out since it’s cheap and a quick read.

Here’s a little taste for the upcoming release.  Due to the work being a 27 page short story, this isn’t going to be very long.  Enjoy.

A nerve-chilling shriek causes Ichabod to duck into the nearest building and peek out of the window. He watches the shadow of a large bird drift across the ground and its four wings drop green feathers that sizzle against the stone. Wanting a better vantage point, he quietly makes his way to a nearby staircase that creaks at the slightest touch. Ichabod stays low as he comes to the second floor and crawls to the nearest wall. Only a corner of the roof remains, which he crouches under while curling a black cloak around him. Hidden by the shadows, he knows it is only a matter of time before he is found by one of the beasts. He tries to think of a way to get out of the city alive, but the oily distortion of the barrier makes him think survival is more urgent than escape.

Ichabod holds his breath when he hears wings flapping from behind his position. Pressing his back against the crumbling wall, he waits for the bird to pass overhead. The gigantic creature reminds him of a parrot, but its wings have patches of blisters and its beak is long like that of a crane. A fan-like tail spreads out behind the beast and skims buildings, its barbed ends leaving gouges in the stone. The bird is slowly circling into an approach that would reveal Ichabod unless the creature has terrible eyesight. Readying his longbow, the adventurer takes a calming breath and aims the weapon.

An eruption of stone causes him to flinch while an orange-furred serpent bursts from beneath the street. Its elastic mouth engulfs the large bird, which thrashes as it is swallowed whole. Several buildings away, the snake’s tail rises from the street and shakes a rattle made of giant skulls. The movement becomes more erratic as acidic feathers melt the predator’s entrails and burn holes in the scaly hide from the inside out. The bird attempts to back out of its captor’s mouth, but is instantly killed when the powerful jaws slam down with their crimson fangs. With neither creature able to fight, they collapse to the street and die in a twitching heap.

“I really should have brought the heavier gear,” Ichabod whispers as he sneaks back down the stairs.

Charles E. Yallowitz was born, raised, and educated in New York. Then he spent a few years in Florida, realized his fear of alligators, and moved back to the Empire State. When he isn't working hard on his epic fantasy stories, Charles can be found cooking or going on whatever adventure his son has planned for the day. 'Legends of Windemere' is his first series, but it certainly won't be his last.
View all posts by Charles Yallowitz →
This entry was posted in Ichabod Brooks and tagged 99 cents, action adventure, archery, author, City of Beasts, excerpt, fantasy, first adventure, Ichabod Brooks, magic, monsters, short stories, sneak peek, sword & sorcery, teaser Tuesday, Windemere, writing. Bookmark the permalink.