Posted on August 8, 2019 by Charles Yallowitz

As usual, here is your warning that this story has cursing, sex (not graphic), innuendo, and violence.  It’s my Rated-R action adventure called Derailing Bedlam.  This is the fourth outing (third official) for Cassidy and Lloyd, so feel free to click on one of the two covers to see how it started.  Each one is 99 cents! 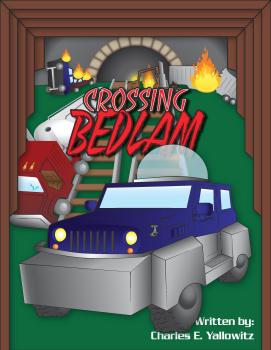 “How did I get pulled into this stupid plan?”

“We needed a third and Dale only has one arm.”

“Your nose doesn’t need to be in one piece for this.”

Cassidy, Lloyd, and Luca stand at the back of the caboose and take a final moment to glare at each other. Hearing the click of a shotgun on the other side of the door, they grab their controllers and flip the switches to activate the drones. Causing a small disturbance within the bison herd, the whirring machines rise off the ground and make wide circles. Two of the devices are armed with heavy weapons, which range from a machinegun to a rocket launcher. They move slower than expected, so the trio spend an extra minute getting used to the controls and response times. Having claimed the one with multiple cameras, Lloyd takes a seat in front of a set of screens, which have been bolted to the railing. He waits until the others are finished practicing with the unfamiliar controls before leading the way towards the approaching dust cloud.

“All we have to do is fend them off long enough for the train to get away,” Cassidy explains as she watches her own display. Having only one camera to work with, she has to depend more on Lloyd’s screens than her own. “We’ve thrown out every tracking device, so losing Laurencia here means we don’t have to worry about them for a while. They will have to get back to the main track and hope we get slowed down. Remember that we’re faster than the big guns, but the smaller ones will be a problem.”

“Who died and put you in charge?” Luca asks, her drone going ahead of the others. Getting high into the air, she barely makes out the fifteen tanks that are rolling across the plains. “Pretty sure the rockets on this one can do some damage. Are we supposed to make sure these come back in one piece? I don’t think I want to work for Bart to pay off my debt. He’s nice, but I’d get bored in a workshop. Please stop moving erratically, hamster dick, because I’m using your screens to help with my aim.”

“All I have is a handgun on this thing, so I’m trying to be harder to hit,” Lloyd argues before dipping low to the ground. Hearing a boom, his drone rises just in time to avoid getting blown to pieces. “Looks like we’ve been seen. Time to be annoying as hell. Preferably to Laurencia and not each other. By the way, has your ass gotten bigger since the last time I saw you? I mean, I can’t move without banging into the damn thing.”

Cassidy whistles before the others can keep talking and shouts, “Banter later! Fight now! Turn on the recorder to see if they’re talking too.”

The plains erupt into chaos when the train begins to move along the track and the bison stampede towards the tanks. Buzzing above the enemy, the drones do their best to draw all of the attention away from the animals. Cassidy fires her machineguns at any opening that she can see in the hopes of getting even one bullet inside the vehicles. After going for so long without a clear shot, the mercenary unleashes short bursts at the treads and anything that she thinks she can break. Having even worse luck, Lloyd gives up on his weapon and uses himself as a decoy. His jerky motions make it difficult for the others to use his cameras, but he does his best to keep the most immediate threats on screen. Noticing that the bison are almost at the tanks, the serial killer buzzes the enemies in the hopes of keeping the large guns aimed at the sky. It turns out to be pointless since Luca is firing her rockets at the ground, the smoking holes causing two of the tanks to get stuck.

“Spitting on them might be more effective than this,” Lloyd complains, his drone doing lazy figure eights over the battle. He feels the train lurch forward, which he hopes is a sign that they are almost done. “At least most of the bison are going around. Those that aren’t seem to be getting the best of the tanks. I’m so glad we didn’t piss these animals off. How much longer do we have to keep doing this?”

“These games aren’t going to stop us for long!” Laurencia shouts over the radio. Her voice is cut off when two of the tanks fire, their shots narrowly missing the caboose. “We’re no longer after our spot on the train. Now, my goal is to destroy the damned thing. Along with that tea-snorting slut-bag, who has been a festering hemorrhoid in my life. Don’t think we won’t slaughter these animals.”

A small tussle happens before Parker takes over the radio and drunkenly declares, “Forget the vermin. I want those two homewreckers dead. Just blast away the back of the train. They’re standing right there.”

“Wonder if we’ll ever see these two again or it’s going to be yelling over a radio for the rest of this adventure,” Lloyd says while helping Luca’s drone aim at the hatch of the largest tank. A blast on the top causes the vehicle to stop and it is shoved back by five powerful bulls that ram into the front. “Holy fucking hell! That was awesome! We need to get the herd back here and do that again. Anybody want to take bets on if they can knock a small tank over? I’m putting three unused knives up for them being able to do it.”

“Focus, Lloyd, because we’re almost at the turn,” Cassidy states as her machinegun runs out of ammunition. Hitting a button on the controller, she jettisons the weapon and drops it on one of the tanks. “This one has three grenades, but I’m useless after they’re launched. We need to hold them off during the turn. The tracks take us into a patch of trees, which will slow the tanks down enough so we can escape. How are you doing, Luca?”

“Two more rockets and I think I have a shotgun with eight shots,” the bounty hunter calmly replies. Her drone veers to the side to avoid machinegun fire, but some of the spray hits the device’s underside. “I have blinking stuff on the picture. Not sure what I’m looking at, but it might be that I can’t fire the rockets. Doesn’t seem like I can switch to the shotgun either. I’m basically flying a propeller-operated gnat, but bigger and louder.”

Rapidly tapping her foot, Cassidy licks her lips and examines the screens for any opening they can use. “We’re about to hit the turn, so this has to be a big blow. The bison are gone, which makes things a little easier. Get as high as you can, Lloyd, so we can see everything. I’m going to do the same and drop all of the grenades on the central tank. On my signal, I want Luca to put her drone on a collision course with my target. If this works, the grenades and the rockets will hit them at the same time. Doubt this fleet will keep moving with Laurencia trapped inside a flaming chunk of wreckage. You ready?”

The train eases into the rickety turn, which forces the trio to hold on until the caboose stops shaking. Lloyd gets his drone into position first, but finds that there are high winds threatening to carry the machine away. He does his best to stay level while Cassidy puts hers at a lower altitude, which she prays will allow the grenades to fall without getting blown off course. Not needing to hover, Luca has her drone make circles around the fleet and repeatedly soars in to buzz any enemies who dare to stick their heads out of the tanks. The tension is nearly suffocating until Cassidy stomps her foot and prepares to hit the button. She waits until the rocket-carrying machine is halfway to the largest tank before releasing the grenades. All three are fired out of the bottom of the drone, their pins glinting in the sunlight as they are ejected from the top. The explosives meet on target and turn into a massive fireball that punches a hole in the turret. The force of the blast is enough to split the rest of the vehicle in half, which causes the entire fleet to stop.

“Did you really think I’d put myself in the biggest target?” Laurencia asks with a laugh. She pops out of one of the tanks in the back and waves to the train. “This one has the best armor and is faster, which is better than being the strongest. Sure, I could have destroyed things easily if I did what you expected, but everyone aims for the big guy. Although, you did kill Parker unless that idiot managed to survive that mess.”

“Keep gloating, but we’re getting away,” Cassidy replies, unsure if she should bother talking back to the crime boss. Bringing her drone back, she lands it on the roof before the train is surrounded by trees. “Hello? Looks like we lost her or she stopped talking. Do you think she’s going to show up again?”

“She wouldn’t be much of a recurring villain if it ended here,” Lloyd says as he steers his drone. The machine sputters and one of the rotors dies, causing it to crash onto the roof. “That’s not my fault. At least it can be fixed and Cassidy’s is in one piece. You’re pretty screwed, ogre rump, but I’m sure you can froth and rabies yourself out of trouble.”

“You’re the poster boy for syphilis-related insanity,” Luca retorts before slamming open the door. She storms into the room, but comes back a second later to grab the serial killer by the hair and shove him backwards. “For the record, my ass is toned and perfect. If need be, I could use it as a deadly weapon.”

“What are you talking about?”

“I’m not going to say it out loud, butt blaster.”

“Should I tell Katie that you’re obsessed with my ass?”

“Not so much obsessed, but afraid that it’s gravity will crush me.”

Cassidy shakes her head as the fight that spirals into a disturbing level of depravity and childish barbs. “I’m going to go lie down. You guys want to come inside? Katie and Tyler said they would have some pizza if we were successful. Free food is always a good thing. You two are just going to keep going at it, huh? Well, more slices for me. Wait a second . . . Am I rambling like, Lloyd? Fuck, I need a drink.”