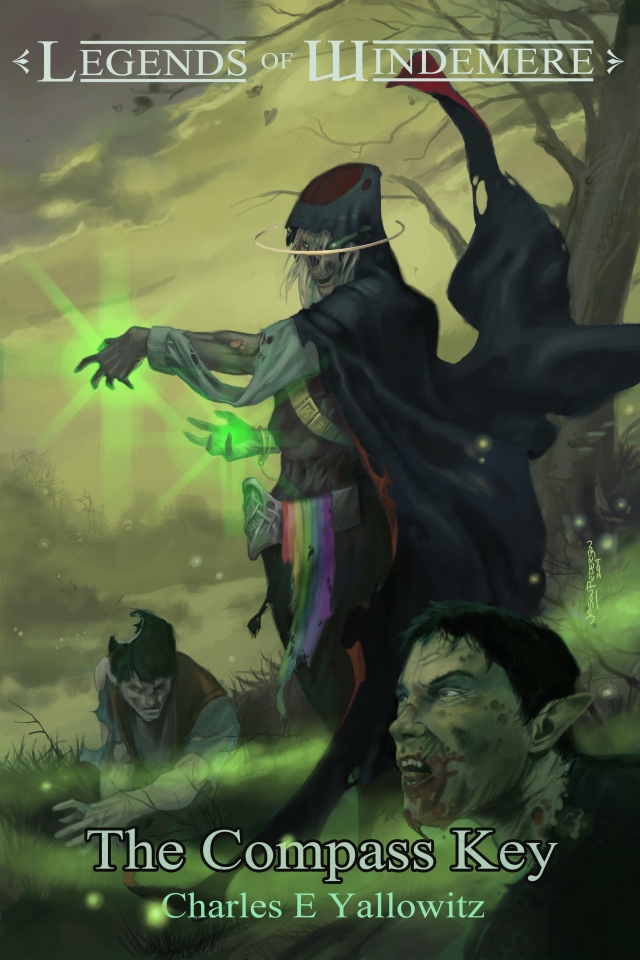 The Compass Key managed to get a vote and I was surprised how little I’d done teasers for it.  Part of the reason for this is because it’s a big transition book during the Legends of Windemere series.  I wanted to keep a lot secret here.  Now, it’s been a while, so I can share a bit more.  Enjoy this fight between Delvin and the leader of a giltris (lizardmen) army.

The screams and hisses are a nerve-wracking symphony to Delvin’s ears as he cautiously walks through the smoke. He is thankful for the cover that Nyx created, but he can hear that the other warriors are having trouble. Most of the fighting sounds like people are stumbling into each other by accident. Arrows sail overhead to hit the far side of the fog where the warriors have been told to avoid. Delvin stops wandering and stands ready for anything, his shield in front of his chest and his longsword held loosely at his side.

“Come on! I’m not going to play hide and seek like everyone else,” Delvin says, hoping to draw some attention to himself.

A dying shriek erupts from his left as one of his fellow warriors is killed. Delvin is about to rush in that direction when the sound of heavy, rapid footfalls in the mud draws his attention in to his front side. A black-scaled giltris comes into view a few feet ahead of him, its sword pointed forward in a blind charge. The creature barely has time to notice Delvin before the warrior blocks the sword with his shield and stabs the enemy in the chest. The lizardman’s lean body topples to the side and its black tongue lolls out of its toothy mouth.

“I need to discuss large battle tactics with Nyx once this is over. Maybe she simply doesn’t know about precision casting or prefers large area spells. I’ve met a few casters who couldn’t cast anything smaller than a massive fireball. In fact, I’ve had to kill a few of those in battle and it really isn’t as hard as you think. Those big spells take so long to cast that it’s easy to rush the caster. Is anybody listening? I’m not talking here out of boredom! Somebody pay attention to the guy who really wants to fight!”

A grin crosses his face as more giltris are attracted to his rambling, their hazy forms lumbering forward. More screams come from his left, but all of the lizardmen are approaching from either the front or his right. He sees the tip of a rusty spear pierce the smoke before the owner looms into view. Jumping back, Delvin hears the weapon scrape against his breastplate. Two more of his enemies rush out of the fog with axes held high, only to crash into their spear-wielding friend. The warrior beheads one of the axe-fighters and slams the edge of his shield into the neck of the other. Gurgling for air, the lizardman falls backwards, leaving its stomach open for a lethal slash. Delvin looks down at the final giltris only to find that it is already lying dead with a snapped neck and an axe in its face.

“That’s disappointing,” he mutters before another scream cuts through the air. “I’m getting really sick of that.”

Sparks sputter from a nearby fire pit, briefly illuminating the silhouette of a very large giltris. Delvin charges in the figure’s direction and adjusts his shield in the hopes of hitting his enemy in the stomach. He slams into the scaly hide of the towering lizardman as the fog is whipped away by a strong wind. Delvin lands on the remains of two warriors, but the enormous giltris only stumbles sideways for a few steps.

“Foolish meat,” the creature growls. A membranous fin rises from its long-snouted head as it licks its lips in anticipation. “You next meal.”

“You must be the Tribe Baron,” Delvin says with a nervous laugh. He rolls away from the giltris’s trident, awkwardly pushing into a crouch and backing away before standing. “Damn breastplate makes it hard to move like that. You wouldn’t be willing to give me some time to adjust, would you?”

“Chatty meat,” the giltris snarls, raising the axe in its other hand above its head. It swings down and strikes the warrior’s shield, sending the young man to his knees.

The former mercenary stabs the giltris in the thigh and pushes the axe away. Rising to his feet, he slams the hilt of his longsword into the creature’s toothy mouth. The towering lizardman stumbles back, flailing its weapons to keep Delvin away. He waits for the trident to swing wide before darting in to slash the giltris in the side. The creature leans away at the last moment, so his longsword barely cuts the outer layer of scales. The warrior notices the axe swinging for his head and can only shift to make sure it strikes his breastplate. The solid impact cracks the tempered metal and sends him into the mud.

“You General,” the Tribe Baron hisses, crouching and cautiously circling its enemy. “Others die fast. You strong and worthy of honor.”

“You’re a great warrior too. I really don’t want to kill you. Do you think you and your tribe could stand down? We’re really only here for the Lich.”

“No. We fight to end once battle start. Unlike humans, we love battle.”

“You obviously haven’t met some of my old friends.”

Delvin swats the trident away and rushes in to slash that giltris across the chest. It is a deep wound, but the large creature ignores the pain long enough to slam the hilt of its axe into the warrior’s temple. Both combatants stumble back only to immediately charge at each other, their weapons ringing in the air. The trident continuously glances off Delvin’s shield while the simple axe deflects his longsword, the exchange preventing either from getting the advantage. The warrior stabs into the giltris’s upper bicep as he sidesteps the trident, causing the flat side of the axe to slam onto his shoulder. A throbbing pain runs down his arm, briefly loosening his grip on his weapon. The Tribe Baron raises its axe to cleave the warrior’s head in two, but it stops when it gets slashed in the armpit, giving the human time to jump out of reach.

With a roar, the lizardman charges and Delvin is driven back by a flurry of attacks. He patiently waits for an opening and dives forward when he sees one. He kicks the axe to the side and uses his shield to strike the Tribe Baron’s wrist so the trident is stabbed into the dirt. Before he can bring his longsword in for a fatal blow, the giltris bites through his chainmail and into his sword arm. Delvin shouts in pain while battering the creature’s head with his shield. A glint of victory shines in the lizardman’s yellow eyes and it pushes the warrior back. Off balance, the former mercenary is barely able to grab the trident as it slips under his breastplate and stabs him in the gut. His chainmail prevents the weapon from pushing too far in, but Delvin is wracked with pain and can feel blood flowing down his stomach.

“I guess you win,” the warrior says as he pushes against the trident. The giltris tries to twist the weapon, but the prongs are tangled in the chainmail links. “You seem to be stuck, big guy.”

The Tribe Baron snorts, sending mucus into Delvin’s hair and face. Flexing its muscles, the giltris pulls its axe arm across its chest, preparing to lop off its enemy’s head. Both are surprised by a high-pitched whistle followed by a wet smack. A long crossbow bolt pins the creature’s wrist to the opposite shoulder before it can swing the axe. Delvin takes the opportunity to pull the trident a little further into his stomach, which yanks his enemy off balance. The blue-eyed warrior stands and moves to the side as he swings his longsword to behead the towering Tribe Baron. The body slumps to the ground, its weight pulling the trident out of Delvin’s stomach.

Charles E. Yallowitz was born, raised, and educated in New York. Then he spent a few years in Florida, realized his fear of alligators, and moved back to the Empire State. When he isn't working hard on his epic fantasy stories, Charles can be found cooking or going on whatever adventure his son has planned for the day. 'Legends of Windemere' is his first series, but it certainly won't be his last.
View all posts by Charles Yallowitz →
This entry was posted in Legends of Windemere, Teaser Tuesday, The Compass Key and tagged author, battle, Compass Key, Delvin Cunningham, epic fantasy, fantasy, Giltris, high fantasy, Legends of Windemere, lizardman, magic, series, sword & sorcery, teaser, teaser Tuesday, tuesday, warrior, Windemere, writing. Bookmark the permalink.