Here we have another Charms of the Feykin excerpt and it focuses on Timoran.  He is out to rescue someone, but I cut it off before the reveal.  That and I removed the references to who is in danger.  Let’s just say things aren’t going well for the champions at this point in the story. 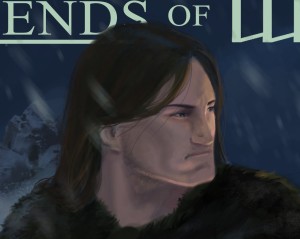 The monkey’s familiar voice stops and turns into a series of screeches, his speaking spell having run its course. With no other way to communicate, Timoran heads down the small hill and tries to remain in the limited shadows. Any citizen who sees him ducks into the nearest house and peeks out through the cloth door, the fabric shifting at their touch. Curious children remain outside until their parents drag them away from the muscular stranger. Previously hidden by the buildings, Timoran can now see several fire pits with roasting meat and pots of boiling vegetables. Sweet aromas fill his nose, but he continues heading toward the earthen well instead of inspecting the food. The longer he walks through Caurea, the more he notices the disheveled appearance and terrified expressions of its citizens. It makes him think of how the chaos elves lived outside of Stonehelm after the battle, but there is a greater sense of misery in the eyes of these people. By the time he reaches his destination, the champions realizes that there were very few healthy men among the locals. All he has seen are women, children, elderly, and the severely injured, many of whom stare at him as if he will kill them at any moment.

“This is a refugee camp,” Timoran whispers to himself while the people at the well scatter at the sight of him. He goes to one of the rectangular slits in the earth and peers into the darkness, his eyes barely making out the shapes of cages. “There are more mysteries than answers in this place. Perhaps I should find the one in charge first. Yet that could put my original goal in danger and I refuse to abandon my friend. Is this a dungeon?”

The ground shakes as something large and angry strikes the earth from below. A bone-chilling scream erupts from the well and is followed by the sound of churning water. Another blow shakes the giant tree, sending ripe figs plummeting to the excited yells of the hungry refugees. Hundreds, if not thousands, of people rush out from their homes and converge on the falling food. Their desire to taste the incredible fruit undoes their caution of the armed warrior, who is watched only by the dirt-marked children. None of the adults listen as the kids point to the stranger sneaking to the edge of the well and peering inside.

With the sun high above the jungle and no canopy to stop its light, Timoran can see to the bottom of the large hole. Thick vines are connected to the walls, which he assumes is to help people climb out if they fall into the clear water. A shadow catches his attention, so he circles around until it is directly across from him. The distorted shape of a doorway can be seen and he assumes it connects to the dungeon that runs beneath the ground. Touching the slick walls, Timoran takes a deep breath and tries to gauge the shifting water’s depth. Another quake sends more fruit to the ground, making him decide that he has to move quickly.

The barbarian dives and cuts through the surface, the heated water catching him by surprise and making him feel a little faint. With the weight of his weapon helping him sink to the very bottom, Timoran practically crawls to the door. To his looming horror, the barbarian finds it is locked and there is no handle for him to grasp. Unable to use his full strength underwater, he does not try to strike the solid wood out of fear of flooding the room on the other side. Working by touch instead of sight, he runs his hands around the entrance in search of a hidden latch. The water’s comforting warmth and his dissipating breath makes him lightheaded, so he considers returning to the surface for a small break.

A spear whizzes by his face, causing him to look up and see that several of the citizens are around the well. The women are armed and doing their best to strike the barbarian, the moving water making it difficult for them to aim. With his lungs starting to burn, Timoran draws his great axe and focus on his enchanted ring. He feels one of the incoming projectiles hit his back, but it lacks the force to do more than cut the skin and float to the floor. Trying to strike the door with all of his strength, the barbarian finds it difficult to get the momentum that is necessary to break through. He tries spinning and stepping forward, but it is like fighting within a tight cocoon that is slowly suffocating him. A spear strikes and sticks into his thigh, the fresh blood drifting to the surface. His vision blurring, Timoran sinks to his knees in front of the entrance and lets his great axe tap the entrance. With a muffled creak, the door opens and he tumbles down a damp stairwell along with a brief flood of water.

“I guess strength is not needed when I wish to break a barrier,” the drenched warrior says while the portal slams shut. Reaching down, he yanks the spear out of his flesh and limps to the nearest cage. “I wonder what was kept in here. Feathers, scales, and fur among the hay. This is rather disturbing.”

“Get out of here, Timoran,” growls a voice from further inside the room. A screeching roar shakes the dungeon, sending dirt falling from the cracked ceiling. “I can smell you and hear you. Part of me wants to eat you. Just forget about me and run.”

Charles E. Yallowitz was born, raised, and educated in New York. Then he spent a few years in Florida, realized his fear of alligators, and moved back to the Empire State. When he isn't working hard on his epic fantasy stories, Charles can be found cooking or going on whatever adventure his son has planned for the day. 'Legends of Windemere' is his first series, but it certainly won't be his last.
View all posts by Charles Yallowitz →
This entry was posted in Charms of the Feykin, Legends of Windemere, Teaser Tuesday and tagged author, barbarian, epic fantasy, excerpt, fantasy, high fantasy, jungle adventure, Legends of Windemere, magic, sword & sorcery, teaser, teaser Tuesday, Timoran, tuesday, Windemere, writing. Bookmark the permalink.