Pre-Order Amanda on the Danube: The Sound of Music #asmsg #childrensbook

Coming October 1st!  The much anticipated 5th volume in the Amanda adventure series! 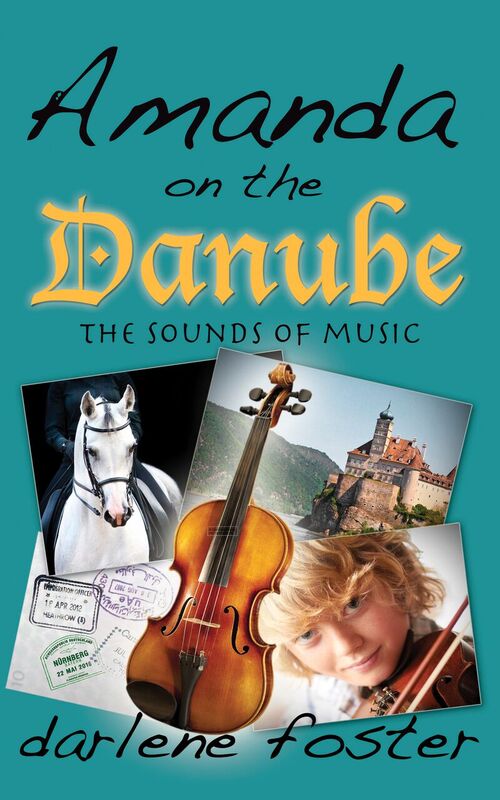 Twelve-year-old Amanda Ross finds herself on an elegant riverboat with her bestie, Leah, cruising down the beautiful Danube, passing medieval castles, luscious green valleys and charming villages. When she is entrusted with a valuable violin by a young, homeless musician during a stop in Germany, a mean boy immediately attempts to take it from her.

Back on their cruise, Amanda struggles to keep the precious violin safe for the poor prodigy. Along the way, she encounters a mysterious monk, a Santa Claus look-alike, and the same nasty boy.

Follow Amanda down the Danube, through Germany, Austria and Hungary, as she enjoys the enchanting sounds of music everywhere she goes. She remains on the lookout, wondering just who she can trust.

The cab dropped them off beside a long, low boat with The Sound of Music written in large letters on the side. The ‘f’ was replaced with a treble clef.

Once on board, they entered an elegant lobby furnished with blue velvet chairs and couches. “This is sooo adorable,” Amanda said. “You love that Sound Of Music movie, Mom, and there are pictures of the von Trapp family all over the walls.”

Her mom’s face lit up when she saw the familiar scenes.

Suddenly, everything went black and Amanda couldn’t see a thing.

Amanda recognized that English accent. She peeled off the hands covering her glasses and turned around. “Leah!” She gave her tall, blonde friend a huge hug.

“We only just got here ourselves. Mum and Dad are putting the luggage in our room. Your room is just across from us.” Leah flashed a wide grin at Amanda’s parents. “I’m so glad you could make this trip. We are all going to have loads of fun. Come, Amanda, let’s explore the boat.”

“See you later.” Amanda barely looked at her parents as she tripped down the narrow hallway behind Leah.

First stop was a large room completely surrounded by windows. Round tables with crisp white tablecloths, set for a meal – without a fork or knife out of place – indicated it was the dining room. Sparkling chandeliers hung from the ceiling.

“Wow! Every table has a view. This will be a fab place to eat.” Amanda looked around. “I hope we can all eat together.”

“Mum has already made sure of that. We got here early so we got to pick which table we wanted for the entire trip.” Leah pointed to a table at the very front of the boat. “Ours is that table for six, the one with the best view.”

Amanda noticed an undone shoelace on her runner and bent down to tie it. Her purse slipped off her shoulder and fell to the floor. As she picked it up, she spotted small red dots sprinkled on the beige and blue carpet.

“What’s this? Do you think someone spilled ketchup?”

Leah bent down to look closer. “Yes, it could be tomato sauce.”

More red spots appeared further along. “Something must have dripped from a plate when they were clearing the tables,” remarked Leah.

“I think it might be… blood.” Amanda followed the spots to a set of stairs.

Leah shook her head. “There goes your overactive imagination again.”

Brought up on a ranch in southern Alberta, Darlene Foster dreamt of travelling the world and meeting interesting people. She had a desire to write since she was twelve and her short stories have won a number of awards. She is the author of the exciting adventure series featuring spunky 12-year-old Amanda Ross who loves to travel to unique places. Her books include:Amanda in Arabia – The Perfume Flask, Amanda in Spain – The Girl in The Painting, Amanda in England – The Missing Novel and Amanda in Alberta – The Writing on the Stone. Readers of all ages enjoy travelling with Amanda as she unravels one mystery after another. Darlene and her husband divide their time between the west coast of Canada and Orihuela Costa, in Spain. She was encouraged by her parents to follow her dreams, and believes everyone is capable of making their dreams come true.

Amanda on The Danube – The Sounds of Music, will be available October 1, 2016

Charles E. Yallowitz was born, raised, and educated in New York. Then he spent a few years in Florida, realized his fear of alligators, and moved back to the Empire State. When he isn't working hard on his epic fantasy stories, Charles can be found cooking or going on whatever adventure his son has planned for the day. 'Legends of Windemere' is his first series, but it certainly won't be his last.
View all posts by Charles Yallowitz →
This entry was posted in Guest Blogging, Spotlight and tagged action adventure, adventure, Amanda series, amazon, Amazon Kindle, Austria, author, blogging, books for kids, Children's book, children's books, Danube, Europe, fiction, Germany, guest blog, Hungary, kindle, Middle-grade book, music, pre-order, travel, violin. Bookmark the permalink.

5 Responses to Pre-Order Amanda on the Danube: The Sound of Music #asmsg #childrensbook