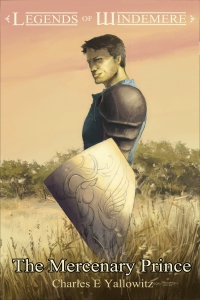 The protege of Selenia Hamilton and the famous Mercenary Prince, Delvin Cunningham is a laid back and relaxed warrior.  Having been separated from his family as a child, he survived on the streets until taken in by Selenia.  A natural at battle tactics and a quick study at swordplay, he proves to be a valued member of the champions, especially when their enemies become more cunning in their plans.  Delvin tends to go with the flow of a situation and waits for the perfect opportunity to buck.  The exception is his immediate attraction to Nyx, which repeatedly results in him being at the wrong end of a mild wind spell.

Much like Timoran, Delvin is rather mild of temperament and personality.  He is more talkative and prone to take charge of a situation, which reveals his laid back persona is to make people underestimate him.  This is similar to his fighting style that relies heavily on blocking and countering once he sees an opening.  Many times, his skill will rise and fall to meet his opponent, which is a source of frustration for his mentor.  The only time he will overpower an enemy is if he wants to get the fight over with.  Because of this, many people refuse to believe Delvin is the Mercenary Prince.

There is a strange power within Delvin that he is only vaguely aware of.  It appears in subtle ways like never scarring or showing to be more durable than an average human.  With a blinding aura, one would expect him to be a caster, but his ability with magic is on par with an untrained child.  Being trained a warrior, he tends to think with his sword and the abilities of his companions before trying to do something that he isn’t sure he is capable of.  He does get curious about what is within him, but it depends on how much coffee he has had.

Charles E. Yallowitz was born, raised, and educated in New York. Then he spent a few years in Florida, realized his fear of alligators, and moved back to the Empire State. When he isn't working hard on his epic fantasy stories, Charles can be found cooking or going on whatever adventure his son has planned for the day. 'Legends of Windemere' is his first series, but it certainly won't be his last.
View all posts by Charles Yallowitz →
This entry was posted in Character Origins, Legends of Windemere and tagged action, adventures, biographies, character origins, characters, coming of age, Delvin Cunningham, epic fantasy, fantasy, fantasy series, forest tracker, high fantasy, Legends of Windemere, magic, mercenaries, Mercenary Prince, sword & sorcery, swords, swordsman, warriors, Windemere. Bookmark the permalink.