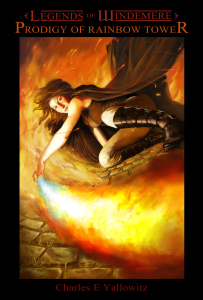 Casters require years of training to master the gestures, incantations, and ingredients that are needed for spellcasting.  Nyx can create a tornado of flames if she sneezes, which means she is in a class by herself.  Orphaned at the age of 2, she has been raised by Willow and Cyril in the esteemed caster school called Rainbow Tower.  Nyx has excelled at her studies with the knowledge that she is meant to face an ancient darkness.  Having no skills at surviving outside of a city and not getting along with horses, this young woman has just as much of an uphill battle as Luke Callindor.

It doesn’t help that she has spent most of her life ostracized and feared by the other apprentices.  This has caused Nyx to be rather standoffish and short-fused when she is first encountered.  Yet, her bond with Luke helps to soften her edges and reveal that she is a fiercely loyal hero.  Having lost her family at such a young age, she sees the champions as her brothers and sisters.  Except for Delvin Cunningham, who is in the unique position of making her blush on a daily basis.  Still, many enemies learn that threatening anyone in Nyx’s family is unhealthy since she is prone to invent spells on the fly.  This can include a fire blast that will avoid a hostage and incinerate an enemy, but she does have a love of fighting.

Over the course of the series, Nyx proves to be the most powerful of the champions.  This results in her being targeted more often than her companions.  Sometimes it is to kill her while other enemies are interested in using her as a living weapon.  No matter what their goal, they always find that Nyx is a force to be reckoned with.

Charles E. Yallowitz was born, raised, and educated in New York. Then he spent a few years in Florida, realized his fear of alligators, and moved back to the Empire State. When he isn't working hard on his epic fantasy stories, Charles can be found cooking or going on whatever adventure his son has planned for the day. 'Legends of Windemere' is his first series, but it certainly won't be his last.
View all posts by Charles Yallowitz →
This entry was posted in Character Origins, Legends of Windemere and tagged action, adventures, biographies, casters, casting, channelers, character origins, characters, coming of age, elemental, elves, epic fantasy, fantasy, fantasy series, forest tracker, high fantasy, illusions, Legends of Windemere, magic, Nyx, sorcerer, sorceress, spells, sword & sorcery, Windemere, wizards. Bookmark the permalink.

14 Responses to Heroes of Windemere: Nyx