Teaser Tuesday: At the Hands of Stephen

Posted on January 26, 2016 by Charles Yallowitz

Taking a full chunk of The Mercenary Prince‘s prologue here.  Gives a hint of what will come and I realized I hadn’t mentioned Trinity in a while.  Hopefully it gets people stirring about the book.  Really isn’t much else to do to set this up.  There are some spoilers as usual, but nothing as major as *censored for your reading pleasure*.  Good to finally get that off my chest. 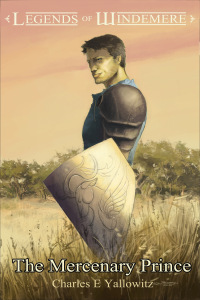 With a filthy sleeve, Trinity wipes her mouth while the taste of vomit causes her to break into painful dry heaves. She has only been conscious for a day, but she feels like her body has been dragged across the globe and her dirt-covered shift helps make that thought more believable. The destroyed garment sticks to her cobalt-colored skin thanks to the tropical heat making her sweat. Trinity uses a nearby tree to hoist herself to her knees and grip the edge of a narrow stump. With a quivering hand, the young woman scoops some of the fresh rain water out of the hollowed wood and uses her magic to float every drop into her mouth. Her stomach settles enough for her to breathe comfortably, but it lurches again when she hears a gut-wrenching screech from behind a nearby thicket of palms. Forcing herself to stand, Trinity makes it a few steps before she falls to her knees and doubles over to retch onto the sand.

“Damn beast was useless!” Stephen shouts as he storms out of the thicket.

He tosses a long, red-scaled tail into the jungle and picks a blue dragonfly wing out of his ebony hair. The crazed immortal wipes at the blood on his bare chest, smearing the crimson liquid around instead of cleaning it off. He licks at his fingers and grimaces at the sugary sweetness, waving his hand to make all of the ichor splatter against a nearby rock. Stephen glances at his frayed pants and slaps them to repair the damage. The belt around his waist glistens as if new and an elegant longsword appears at his side, the presence of the weapon helping him push through his mental fog. As if seeing her for the first time, the madman kneels to examine Trinity’s battered, shuddering body.

“I should apologize now that I have had time to rest,” he says to the chaos elf as she bats his hand away. He catches the channeler by the hair and yanks her to her feet before cleaning her with a wave of his hand. “I know what you saw was distasteful, but I’m surprised you reacted so violently. That drite was not the first creature you have seen me torture. Not that it could tell me where our enemies are hiding.”

“Just because the champions travel with Fizzle, doesn’t mean every drite knows their location,” Trinity argues, leaning away as her companion sniffs at her neck. She tries to use her magic to create a comfortable bodysuit, but her power sputters after transforming the shift into a black tunic. “I can barely access my aura. What did you do to me?”

“Nothing, my little channeler. You are still weak from Yola’s accident,” Stephen replies while he runs his hand down her side. The rest of the chaos elf’s clothing appears, the sleeves and midriff dissolving in the breeze. “None of that is important because I want you to be there when I claim Nyx. I know I have been cruel to you and made you feel like you are nothing more than a temporary indulgence. So I decided to bring you with me and prove that you hold a special place in my heart. In fact, I will make sure that you give me my first daughter while Nyx gives me my first son.”

“I’d rather gouge out my own throat with a toothpick than bare your child.”

“Like that would stop me. I’d simply undo the damage before you die.”

“Then I’d raise the girl to despise you.”

“Well that does appear to be a Kernaghan tradition.”

Trinity slips from Stephen’s grasp and backs away toward the sandy shore. “You’re disturbingly happy for a man whose mind is scrambled. Did your father and Nyder fix you before you escaped?”

With a sadistic grin, the man reaches toward his companion, but he stops when something large smashes through the underbrush behind him. Stephen turns around to face the towering beast that resembles a bear with thick rhinoceros hide instead of fur. Sharp claws extend from its wide feet and its jaws telescope out a few inches with every threatening bite. A powerful roar shakes the island before the predator charges over the moist sand. The creature lunges for a strike, but crashes to the ground when Stephen calmly punches through its skull and yanks out its brain. With a casual yawn, he tosses the organ into the ocean and shrugs when the rising tide carries it back to shore.

“Guess the crabs will be happy for the meal,” Stephen states as he goes about dismembering the corpse. He carelessly tosses the parts around, several of them getting hurled over the trees. “It appears the little dragon had a friend. Probably supplied the beast with food from other regions since there is nothing on this island that could feed a predator of this size. Do you think we should keep any of it for food or should I let it rot?”

“I don’t care,” Trinity replies, fighting the urge to throw up at the sight of blood. “Just bring me back to Shayd and we’ll get you fixed. It isn’t safe to challenge our enemies when you’re not in your right mind.”

“I disagree!” her companion bellows, moving to strike her across the face. He stops and turns the blow into playful tickle on her pointy ear. “Now is the perfect time to attack the champions and claim Nyx. Before I was weak and wasting my time with plans that would help my father’s dreams. Now my mind is clear of all distractions, so I can claim my true strength and fight for what I want. When we find the champions, I will strike with uninhibited fury and leave their battered corpses in my wake.”

“Forget that uselessness because I simply want to win.”

“There are different levels of winning. If you desire Nyx then a simple slaughter and kidnapping won’t do the trick.”

“Those are only the beginning.”

Trinity runs her finger along Stephen’s stubbled jawline and licks her lips, shuddering at the sour taste on her tongue. “Care to tell me more? I’m always a big help to you when we work together. I saved you from Luke Callindor when he gave you that neck scar. I helped you get home after Dariana scrambled your mind. Who else has always been there to take care of you in your times of need?”

“I have been there,” the man bluntly states with a glimmer of fury in his blue eyes. His fingers crack as he flexes them, both hands itching to tear into warm flesh. “You always stop me from killing a champion or breaking Nyx. One has to wonder if you are truly on my father’s side considering how often you have acted in their favor. Although, he seems to want this group to live longer their predecessors, so maybe he is the true traitor. That would mean your loyalty is only to him and having you with me is a risk. There is very little to stop you from contacting my father and convincing him to send Yola or a named demon to retrieve you. I will have to do something drastic to prevent that.”

Trinity takes a step away, but Stephen appears behind her to catch the woman in a rough embrace. She struggles for a few seconds before her energy is drained and she hangs limp in his arms. The immortal nobleman eases the groaning body to the ground, moving his hands onto her barely moving chest. He slips one finger through her shirt and into her skin, creating a hole of energy that gnaws on the intrusive digit. The pain runs up his arm and erupts from his back in the form of an invisible wave of energy that uproots a tree. Before the agony can break his fragile concentration, Stephen hooks his companion’s core and extracts a glowing tether that he jams into his own chest. Their raw energies merge as the line grows so thin that it is impossible to see with the naked eye.

“Now you are truly mine, little queen,” Stephen whispers into Trinity’s ear. He kisses her on the forehead with enough force to press her head into the damp sand. “Don’t get too comfortable within my heart. Your time is swiftly coming to an end.”

Charles E. Yallowitz was born, raised, and educated in New York. Then he spent a few years in Florida, realized his fear of alligators, and moved back to the Empire State. When he isn't working hard on his epic fantasy stories, Charles can be found cooking or going on whatever adventure his son has planned for the day. 'Legends of Windemere' is his first series, but it certainly won't be his last.
View all posts by Charles Yallowitz →
This entry was posted in Teaser Tuesday, The Mercenary Prince and tagged action, adventure, author, Charles E Yallowitz, dragons, epic fantasy, excerpt, fantasy, high fantasy, Legends of Windemere, magic, Queen Trinity, Stephen, Stephen Kernaghan, sword & sorcery, teaser, teaser Tuesday, The Mercenary Prince, Trinity, tuesday, villains, Windemere, writing. Bookmark the permalink.

17 Responses to Teaser Tuesday: At the Hands of Stephen