Posted on October 27, 2015 by Charles Yallowitz 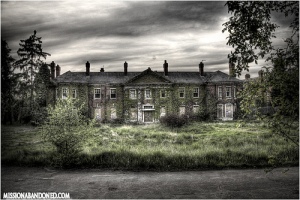 Ian rests on the couch while the other members of his group remain in a circle, none of them remembering the events of last night. An empty chair sits with Dawn’s name on it, but she has not been seen all morning. In fact, the young woman is another subject that people appear to have forgotten. Not that her vanishing is the strangest change since the riot. Rich and Dr. Rutherford are in their usual positions around the circle and debating the existence of ghosts like they did every session. The only difference is that Gina is standing behind the doctor with two stun guns on her belt. She has told the other patients that it is to make sure everyone behaves, but her eyes rarely stray from the back of the blonde woman’s head.

Ian can sense that whatever Corvus is planning will happen any minute and he prefers to be the one closest to the door. Keeping one foot on the ground, he continues groaning and pretending to hold back vomiting. Sipping at a plastic cup of water, he does his best attempt at faking an illness in the hope of being sent to his room. The option never comes up and all he gains from the theatrics are angry glares from the others. By the time half of the session is over, he has given up on the ruse and tries his best to remain quiet. If he cannot be sent away then he will try his damnedest to be forgotten by his captors.

“I’m not saying magic is involved. Ghosts don’t always mean magic,” Rich states while wringing his camera strap. He curses under his breath when the man he is arguing with stares at him in confusion. “First of all, magic doesn’t exist. Unicorns, dragons, and all that rubbish are what half-wit fantasy authors use to sell books. Ghosts on the other hand can exist because they’re nothing more than the spirits of the dead. Those who are banned from the afterlife are forced to wander our world. Some get angry and lash out when they can, but we tend to not notice. That still isn’t magic though because it’s nothing more than our inner spark acting without a body. Why is this so hard to understand?”

“Because I still don’t see why it matters. Ghosts move things and are invisible like wizards, so they can both be magic,” the man says in a dry tone. When he sees the smirk of Gina’s face, he crosses his arms and leans back in his chair. “You’re always changing your story when it comes to these things. How about you admit that this all a push for attention? Right, Dr. Rutherford?”

“I believe it is more about passing one’s mental weaknesses off on an outside force that cannot be entirely disproved,” she replies without looking up. Her hand is constantly writing even though she has never turned the page. “I’m sorry, Mr. Garrett, but we’ve been having this discussion for months. It is about time you realize that your fixation on ghosts is a delusion caused by your own feeling of helplessness. Nothing ever seems to be in your control, so you blame invisible figures. We are unable to make you believe that the ghosts are in your head because you would need to listen first.”

“I listen all the time, but I know what I see,” Rich swears while clutching his camera. His eyes widen as if something is happening outside, so everyone turns only to see a pair of squirrels pilfering a bird’s nest. “Other people have experienced the ghosts here. They tell me stories when you and the orderlies aren’t listening. It’s impossible for multiple people to experience the same thing. Why do you only disagree with me?”

Dr. Rutherford rubs her eyes, which nearly knocks her glasses off her face. “Because the others don’t bring it up in their sessions, Mr. Garrett. You will not step away from this topic to discuss other aspects of your condition. That makes it difficult to help you and I’m coming to my wits end. I wonder how you will ever be found fit to leave here if you continue to be stubborn about your hallucinations.”

“I’m not supposed to be here!”

“Claiming such a thing is another hindrance to your recovery.”

“But I’m a reporter and you know it.”

Gina leans forward and whispers into her boss’s ear, the brief contact enough to make the other woman stop writing. “Don’t you think you’re being a little harsh? These people are fragile and we want to help them. Pushing them in the wrong direction puts the institution at risk. Not to mention yourself.”

“And you think you know more than me?” Dr. Rutherford asks with a laugh. The patients sit straight in their chairs and stare forward, each one focused on whoever is across the circle. “Need I remind you that you’re an orderly while I’m a doctor? You’re not even a senior member, Ms. Nash, since you arrived only weeks ago. Don’t let your taste of power go to your head because all of us are expendable behind these walls. I spent my life striving to reach this point and I’d rather die than let a whim be my downfall.”

“It’s a shame,” Gina says, taking a few steps away from the doctor. She removes the stun guns from her belt and turns them on, the prongs briefly sparking to life. “Corvus had hoped you’d assimilate to your new mentality. Though he didn’t try very hard, so I guess he left too much of the old you in there. Guess you get your wish, Grace.”

A sharp whistle causes Rich to foam at the mouth and lunge across the circle, his sudden movement scaring the other patients. He swings his camera as hard as he can and the device breaks against Dr. Rutherford’s head. The woman collapses to the floor where she is pounced on and pummeled by the enraged man. She pushes him off and tries to crawl away, but Rich jumps on her back and bashes her head in with the biggest chunk of his camera. The brutality of the attack causes the residents to panic and scream in terror, two of them leaping out the open window and racing toward the forest. By the time Gina presses both stun guns to the bald man’s neck and shocks him, her boss is only able to make a final gasping breath before dying. The orderly checks for a pulse on Rich’s neck and frowns at the gentle crinkling of his severely burned skin. The slightest pressure splits the flesh and she watches ivory-colored blood seep out of the wound.

“I didn’t know stun guns could do that,” Gina mutters as she rushes for the intercom. A few patients get in her way and she stuns all of them, using up the charges of both devices. “I need help in the group therapy session! One of the patients has killed Dr. Rutherford and the others are trying to escape. Send the guards and have more lock down the common room and cafeteria to make sure this doesn’t spread. I’ll do what I can to contain this.”

Gina drags the empty couch to block the door and sprints across the room to close the windows. She pauses and turns around to examine the room after getting the feeling that she is missing something. Not sure what has put her on edge, the orderly finishes sealing the room and grabs the nearest blunt object to defend herself. As soon as Gina lifts the raven-shaped paperweight, all of the patients turn toward her and their eyes glaze over as they close in on the woman.

Charles E. Yallowitz was born, raised, and educated in New York. Then he spent a few years in Florida, realized his fear of alligators, and moved back to the Empire State. When he isn't working hard on his epic fantasy stories, Charles can be found cooking or going on whatever adventure his son has planned for the day. 'Legends of Windemere' is his first series, but it certainly won't be his last.
View all posts by Charles Yallowitz →
This entry was posted in Raven's Hold and tagged asylum, author, excerpt, fiction, ghosts, paranormal, paranormal thriller, supernatural, thriller, writing. Bookmark the permalink.