Posted on September 8, 2015 by Charles Yallowitz

The Merchant of Nevra Coil is Live!

So, I’m going to take on a little extra of the teaser scene and go to a point where a familiar face shows up.  This gives a small hint as to the identity of the Merchant.  So I’ll put up a blocker in case of spoilers.  Enjoy and grab your copy by clicking the link above. 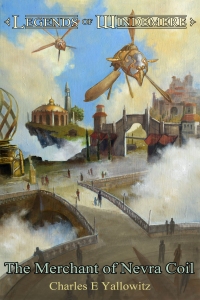 “This is where we would normally dock, but you’re wanted on the one-hundred and eighty-sixth and a half floor of Inspiration Tower,” Jo says while waving to the other ship. She waits for them to leave before rising to the higher sky lanes where there is more space. “If you look to the right, you’ll see the Lizard. It’s used by those of us who don’t have a flying device due to no interest, accidents, revoked license, or whatever else can go wrong. I’ll swing by to give you a better look, but don’t stare directly into the golem’s eye. You never know if it’s going to be friendly or . . . churlish.”

Dipping toward a metallic rail, the ship comes alongside a green-scaled reptile with seats grown into its wide back. A throbbing bubble covers the sitting area, the oily membrane protecting riders from the elements until the transport comes to a stop. Gnomes are comfortably sitting in the chairs, most of them reading notes or sleeping. The creature’s tail is merged with the track to prevent it from falling off while it pulls itself along using powerful front legs. A driver on its head opens a hatch in the top of its long nose to drop in a shovelful of screeching beetles. The Lizard slows down while everyone hears the insects getting crunched in the construct’s mouth. When the strange transport hisses at the ship, Jo pulls away and heads for where a trio of metallic birds are sitting on a windowless tower.

“Those are our product transports, which we call the Flock. We have nine of them, but there are usually three out at a time,” the gnome says with a yawn. With the pull of a lever and a few stomps on an accordion pedal, the ring-ship gently turns toward a tower that ends in a forked spire. “Sorry we can’t get closer to the birds, but they’re being loaded right now. So we’re heading straight to Inspiration Tower where you’ll be staying. There are two hundred floors that include personal labs, government offices, honored guest suites, and the Founder Museum that doubles as a Temple of Voran. I’m not sure what you’re going to be shown, but I assure you that it’ll be exciting.”

“I guess we can stop at a government office to discuss using Everthorne as a port,” Luke mentions while they stop to let a group of young gnomes on flying discs pass by. “Do you know who we can talk to about that?”

“Those idiots are at it again?” Jo groans, adjusting their altitude as they get closer to the elegant building. They circle the roof and watch multi-colored lightning dance between the spire prongs. “They want us to create a Lizard stop within their territory, which was part of the original deal. Then we realized how bad an idea it was because of the distance. Instead, we’re working on a Ring House that can be erected in the current landing spot. It’ll be smaller than the ones here and we need to perfect the design to avoid disturbing the aerial fauna, but it will be done. Those Pillars need to be patient and stop using our guests as messengers. You’re the fifth group this month to bring this headache up.”

“So where we go?” Fizzle asks from Dariana’s shoulder. “We need find doll maker.”

“I’ve called ahead,” the pilot announces while pounding on a few buttons. She licks her lips as she pulls a lever that creaks and unleashes a loud clunk. “Remember to hold onto the railing as you walk across the entry bridge. The winds from the flight blades can be dangerous. Good luck in there.”

A scaffolding arm lowers to the proper floor and meets the ship as it waits for clearance from the building supervisor. After an unintelligible squawk over the intercom, Jo docks and the vessel comes to a shuddering halt. With Sari in the lead, the champions file out of a door that opens in front of the pilot’s chair and connects to a metal bridge that visibly sways in the strong winds. Not wanting to waste time, they hurry into Inspiration Tower and wave to their departing ride from the comfort of a shielded balcony. Once Jo and her vessel disappear into the crowded sky, Timoran pushes the door open to a platform that sits between the two floors. There are a few gnomes hurrying up and down the stairs, but none of them are close enough to notice the new arrivals.

“It’s a half floor because it’s nothing more than a transition between the other two,” Dariana whispers as she closes the door behind her. She attempts a quick scan of the area, but an invisible force smacks her upside the head. “They have some rather aggressive psychic blockers. I assume to stop anyone from stealing ideas. I’m sorry, but I won’t be any help here.”

“They would not put us on this floor unless someone was going to meet us,” Timoran points out while stretching his stiff legs. He stumbles back when he turns to see a full grown sheep patiently waiting behind him. “I cannot believe I was caught off-guard by a sheep. Did anyone hear this animal walk up to us?”

Catch the rest in THE MERCHANT OF NEVRA COIL!

Charles E. Yallowitz was born, raised, and educated in New York. Then he spent a few years in Florida, realized his fear of alligators, and moved back to the Empire State. When he isn't working hard on his epic fantasy stories, Charles can be found cooking or going on whatever adventure his son has planned for the day. 'Legends of Windemere' is his first series, but it certainly won't be his last.
View all posts by Charles Yallowitz →
This entry was posted in Merchant of Nevra Coil, Teaser Tuesday and tagged amazon, author, epic fantasy, excerpt, fantasy, fantasy series, gnomes, heroes, high fantasy, kindle, Legends of Windemere, Luke Callindor, magic, magical technology, Nevra Coil, Nyx, sword & sorcery, teaser, teaser Tuesday, Windemere, writing. Bookmark the permalink.