Brief Mention of My Advertising Plan

Posted on December 17, 2013 by Charles Yallowitz

I haven’t done a post about my path as an indie author for a while, so this will be detailed.  These are typically filled with explanations of my experience.  Truthfully, things have been tame since the release of Prodigy of Rainbow Tower in August.  With the December release of Allure of the Gypsies, things have taken on an interesting pattern.  I’ve been slowly evolving my advertising sphere with pricier things when I have the royalties to afford it.  So, I will say now that part of this plan requires spending money.  If you don’t have royalties then possibly save up a fund of about $100 at first.  It’s lead me to my current system, which I’ll share by explaining the stages.

First, some things to consider here:

For my first book, I had no idea what I was doing in terms of marketing.  I set up on WordPress and danced around on social media like a poorly trained monkey.  Blog interviews, begging for guest posts, and doing whatever I could think of for attention.  Forget the monkey.  I was a toddler who learned how to sing a new song.  During this stage, I went more for free advertising sites (Bookpinning, Just Out on Novelspot) and cheaper sites (AskDavid.com, Goodkindles).  Most of this stage was about dipping a toe into the water.  I did spend a little extra on a few services that was a one time fee for a permanent placement on a sites’ database.  By the end of the first month, I was out of ammo beyond guest posts and taking advantage of being a fresh face.  Wattpad was in here too, but this only helps if you’re writing some form of romance.

No longer a fresh face, I had a plan for the big blast.  One or two sites changed, so I had to adapt at the last second.  Here is where I attempted my first Hype Week, which worked out pretty well.  I also did a Book Blast the day before the debut, which was an oops on my part because the day of or after would have been smarter.  I can out swinging on the momentum of my first book and using all the tools that succeeded.  I even got into the Facebook promo groups.  It was going strong for a month and the Top 100 Lists gave me a sweet boost again.

Then I got curious.  I looked around for other promotion sites that were a little higher priced than what I used.  Ionia sent me the link to one that made me nervous and I stumbled onto another.  This is where Indie Author Anonymous and Indie Author News came into my mix.  I did promo packages for Beginning of a Hero too, so you can give the first book a boost here as well.  This stage consists of more in-depth articles on a bigger platform.  Through Indie Author Anonymous, I gained exposure on several social media platforms.  Through Indie Author News, I gained multiple tweets a day from their two accounts and a horde of retweets.  This all the second month and it is what helped me through the summer slump.

Allure of the Gypsies Stage (about $300) 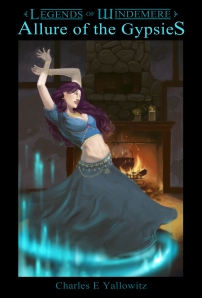 I set up all of the used sites within the first day and a few stumbles happened.  Not so much stumbles, but timings that I forgot to think about.  Indie Author News and a Spotlight on Just One Indie’s Opinion hit on December 15th.  At first, I shrugged.  Then I realized I missed something important.  A MID-MONTH BOOST!  I had been so focused on coming out swinging that I never considered a jolt in the middle of the month.  I was depending on my blogging and the current blog tour to get through things.  I felt foolish and it was about to get oddly better/worse.

I had the money and wanted to attempt one type of marketing that I had avoided up to this point.  Not the celebrity endorsement that some friends keep telling me to do.  Banner and sidebar ads on sites.  These can range from $25-$100+ depending on the site, but most last for 30-days.  That means this ad will be visible for 30-days.  Well, I started with Goodkindles and goofed up by coming late to the party.  My ad goes up in January . . . which started this idea: MONTH 2 BOOST!  Some of these ads are going to be up through January to give me an extra month of marketing.  Will they work?  I’m not sure and won’t know for a while.  I grabbed a few other sites on this round and I’m waiting to see how they do.  That Part Where has shown a lot of promise and it’s striking me as a great site to use as a future Round 2 instead of an initial site.  I’m going to need to examine what I’m doing to see if some sites are better suited for initial release or to give a mid or second month boost.

That’s my story and I know it depends a lot on having money.  Will it work for everyone?  No, but maybe you’ll find something that will work for you in here.  Sorry for the length of this and I do have a voice saying ‘don’t share your secrets!’  Still, we’re all in this together.

Charles E. Yallowitz was born, raised, and educated in New York. Then he spent a few years in Florida, realized his fear of alligators, and moved back to the Empire State. When he isn't working hard on his epic fantasy stories, Charles can be found cooking or going on whatever adventure his son has planned for the day. 'Legends of Windemere' is his first series, but it certainly won't be his last.
View all posts by Charles Yallowitz →
This entry was posted in Uncategorized and tagged advertising, author, indie author, marketing, promotion, selfpublished, selfpublishing, writing. Bookmark the permalink.

48 Responses to Brief Mention of My Advertising Plan