Posted on April 7, 2013 by Charles Yallowitz

I have to admit that I’m not one of those people who gets excited about his birthday.  I don’t start reminding people a few weeks in advance.  I might casually mention it in order to make sure I get a little attention.  For the most part, I kind of move through the day like every other day.  For example, I turn 33 on Tuesday and I’m going to be editing, blogging, and doing what I always do.  Sure, we’ll bring in dinner (hopefully) and a cake will be involved.  I have a friend visiting next weekend.  Yet, I don’t have the same fervor for my ‘special’ day.  Though, I am excited about getting a Kindle and finally reading several eBooks that have been on my wishlist.

I can track this nonchalance back to my 30th year of life.  My wife, son, and I had just moved back from Florida, which wasn’t as glorious an event as people think.  I couldn’t find work, we had a new baby, and my wife was still suffering from her epic mental breakdown.  She couldn’t hold down her job even though they tried, so we moved in with my parents when we still had the money to make the move.  The following year was horrible with my wife’s condition, bleeding money thanks to COBRA, learning how to be a parent, and me finding a job that ate away at my own sanity.  By the time I hit 31, I was a depressed husk of a creature trying to find a reason to push forward. 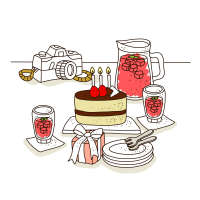 Then came my 31st birthday and I did the one thing I probably shouldn’t have done.  I reflected on where my life was.  When you’re depressed to the point of suicidal thoughts and have had the worst year in your life, you might not want to look behind you.  That is what made me start calling April 9th my ‘Happy Not Dead Day’.  The name was catchy to a few friends, so I still call it that even now.  The point of it was that the only thing I could see as an accomplishment was that I was still alive.  Though, part of me thought that wasn’t a good thing.  This mentality stuck for a while until I got a better job, which I lost because of something beyond my control.  Not their fault and I fully understand the decision, but I really liked that job.

I should switch to the upswing here.  My 32nd year saw several changes.  One is that the celebrity who was typically the face of my birthday on the sites I wander changed from Hugh Hefner to Kristen Stewart.  For anyone who paid attention to a few posts of the past, this is the moment I found out I had an instinctual fear of her.  Why is this important to the story?  It really showed how nucking futs I had become. The teasing from one of my closest friends and my wife examining the picture to figure out what could have set me off was priceless.  My wife and I had an hour long conversation about this, which was the first time I had laughed in a year.  I mean truly laughed to the point where a few tears slipped out of the ducts.  To you this may seem like a ridiculous story, but to me this was a sign that I needed to do some mental repairs.

The other change came when I was drinking with friends.  It was a casual gathering with drinks and I did my usual idiocy of over-indulging.  Somewhere in there I got in a conversation with an old friend about how my life sucks.  I remember him telling me that I was probably one of the smartest people he knows, which is bizarre since this guy is one of the smartest people I know.  I think he might cunning or something, but even that makes little sense.  Basically, he gave me a long speech about how I need to get my butt in gear and just do something.  I had just lost that job I had mentioned earlier, so this is where the idea of going for Amazon publishing came from.

Truthfully, after that conversation something in me either broke or fixed itself.  I tried for a few temp jobs while planning everything and I simply couldn’t focus on them.  I used to be a hardworking office drone, but I simply didn’t care.  I could force it, but that became more difficult as I progressed with the writing job.  Then, my wife started working better paying jobs and I opted to be the stay-at-home parent.  It was a good thing too because my son had a few months of being sent home sick every other day.  If I was still working then we would have had a big problem.  That’s what led up to the blogging and Amazon and the story that everyone already knows.

With my 33rd birthday looming, I’m still not at the old excited stage, but I’m not dreading it any more.  This is the first time in a while that I hit a birthday with success behind me.  I didn’t have a year of failure or simply surviving.  I’ve lost weight, adopted an exercise regime, spend a lot of time with my son, published my book, sold over 2,000 copies, made a ton of new friends, and even finished writing my first novel in 4-5 years.  Seriously, it was that much time between Allure of the Gypsies and Family of the Tri-Rune.  I don’t think anything big is planned for next weekend beyond my good friend/personal tormentor showing up.  I leave it to my wife to do all that.

Now with saying this today, I need to figure out what to say here on my actual birthday.  Maybe just a fun fact list for April 9th.  That could be a fun piece of research.

Charles E. Yallowitz was born, raised, and educated in New York. Then he spent a few years in Florida, realized his fear of alligators, and moved back to the Empire State. When he isn't working hard on his epic fantasy stories, Charles can be found cooking or going on whatever adventure his son has planned for the day. 'Legends of Windemere' is his first series, but it certainly won't be his last.
View all posts by Charles Yallowitz →
This entry was posted in Uncategorized and tagged april, birthday, cake, depression, happiness, success. Bookmark the permalink.

12 Responses to Pre-Birthday Blues, A History