Posted on October 17, 2022 by Charles Yallowitz 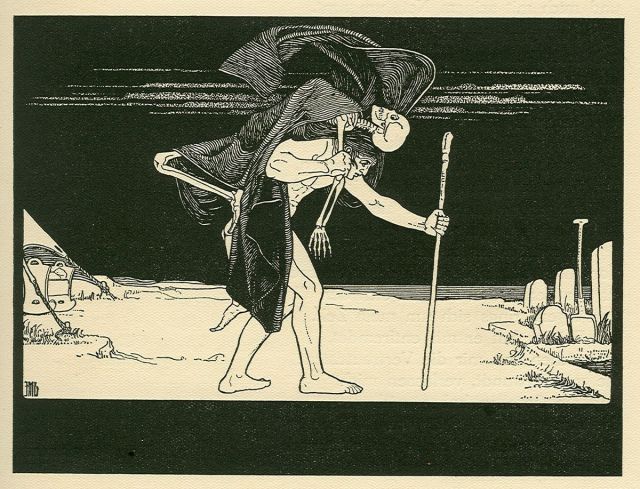 The Dybbuk comes out of Jewish folklore and it first showed up in the 16th century.  Prior to that, demons were used in place of ghosts.  So, it took a little time for this creature to gain some traction.  So, what is it?

The Dybbuk possesses people, which is why you see it on the back of the person in the image above.  Though, there are a variety of methods/reasons for them to latch onto someone:

I couldn’t find any physical description of the Dybbuk, but that makes sense.  These are spirits of the dead, which means they would look somewhat like they did when alive or nothing at all.  There’s never been a standard description of ghosts.  You’ve got invisible, skeletal, human with no legs, full body, blobs, and the list keeps going.  This is why the Ghostbusters had categories instead of just ‘ghost’.  Besides, any ghost that possesses a person ends up losing its initial form anyway until it leaves.

Now, this looks like it came entirely from literature instead of any religious text.  Still, it resulted in Rabbis doing exorcisms on those who were possessed by a Dybbuk.  This evolved from one powerful Rabbi alone to him having 9 other people.  They would surround the possessed and the Rabbi blows a shofar (ram horn instrument) in a certain way to shock the Dybbuk and victim.  The connection is weakened enough for a dialog and prayer to happen.  Yeah, the Rabbi talks with the Dybbuk to find out what it wants and try to convince it to leave.  The group does healing prayers for both parties while the spirit is sent away.  Exorcism through a conversation is probably the most Jewish thing I’ve heard of in a long time.  I just know part of this dialog is a guilt trip.

Like the Wendgio, the Dybbuk has a syndrome named after it.  This diagnosis is connected to hysteria and schizophrenia.  Are we surprised?  Demon and ghost possession has always been connected to mental health issues.  The Dybbuk is thought to have been born from mental issues involving paranoia and anxiety.  It makes me think that the dialog method of exorcism isn’t just a bizarre and messed up version of therapy.  You’re talking to someone and making their emotions feel justified instead of casting them aside.  This whole thing really does feel like a creature born from mental illness and, oddly enough, a low stress way to help them.  The shofar at the start isn’t great, but we’re not talking about strapping someone onto a bed and yelling at them while throwing water in their face.  At least, when they group came into play.

The Dybbuk really makes me wonder about monsters and their connection to mental health.  It explains so much about this specific lore.

Charles E. Yallowitz was born, raised, and educated in New York. Then he spent a few years in Florida, realized his fear of alligators, and moved back to the Empire State. When he isn't working hard on his epic fantasy stories, Charles can be found cooking or going on whatever adventure his son has planned for the day. 'Legends of Windemere' is his first series, but it certainly won't be his last.
View all posts by Charles Yallowitz →
This entry was posted in Uncategorized and tagged Dybbuk, exorcism, folklore, ghosts, Judaism, Kabbalah, mental health, monsters, mythology, october, possession. Bookmark the permalink.

26 Responses to Monster Month: The Dybbuk