Posted on November 16, 2021 by Charles Yallowitz 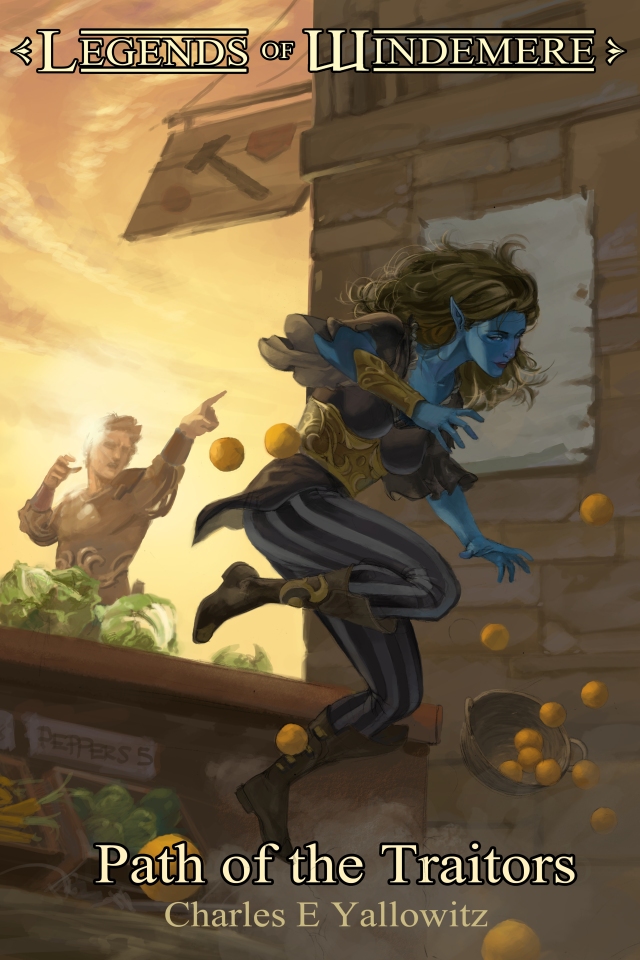 Legends of Windemere: Path of the Traitors was one of my favorite books to write because it focused on supporting characters.  It allowed me to step away from the champions and show events that would impact the finale.  This worked better in my mind than having the sudden changes appear out of nowhere and then show the book that revealed the cause.  I was also given a chance to focus on Queen Trinity, who earned the shot at redemption.  Enjoy.

“Maybe we missed a door,” Trinity mutters while looking over the edge. She locates the area that they left Altia and frowns at how there is no movement below. “That thing will be here soon. Help me search for the crests. Check around the turrets because they could be attached to the stone. If we don’t find anything then I’ll get us to the ground where we can run. Does your map tell us anything, Quail?”

“It’s only showing the entire city,” he answers while inspecting the wind chime. Finding nothing of interest, he gets on his hands and knees to check the floor. “I really hope we’re right about them being here because I wouldn’t know where else to look. Putting them in a random building would make this more difficult, but I would hope the dragons aren’t that cruel. What if the crests are back at the beginning and we never had to enter the ruins?”

“That would really make me mad,” the channeler replies, her eyes glowing to help her see in the dark. Running her hands around the turrets, she sinks some of her energy into the roof in case the crests are inside the stone. “I doubt it since we left Vile there. He can still see things, so he could simply point them out to win this. There is something magical around here, but I can’t figure out what it is. Can you break this rock for me? I’d use a spell, but that would draw too much attention. Quail? Hello?”

A dryness consumes Trinity’s mouth as she turns around to find her companion standing still on the opposite side of the roof. For a moment, the channeler thinks he has found something and is staring in awe. Her hopes are crushed at the sight of drool falling from his slack mouth and a growing paleness to his cobalt skin. Trinity backs against the turret and covers her arm in a lightning lance, her eyes darting from side to side. With a piercing whistle, the apparition rises out of the tower next to Quail, whose ankle is in her hand. The creature yanks the mapper’s soul out of his body, which flops to the floor and kicks up a puff of dust. Swallowing his spirit headfirst, the phantom steps forward and waves for Trinity to attack. The crackling spell hits the apparition in the chest and harmlessly sputters into a line of sparks that do nothing more than singe the ground.

“I didn’t think that would work,” Trinity admits with a forced smirk. She hops onto the turret when her enemy steps forward, one of her heels sliding to the edge. “You should be afraid now. The others aren’t slowing me down, so I can drag this fight across the entire city. No more holding back for me, which means I’ll destroy you soon. It will be a lot easier to find the crests with you out of the way.”

“Such bravado even after that horrible vision,” the apparition states while walking to the wind chime. She grips the pole and spins around before flipping onto the top. “I can smell your damage. Are you the protector, the avenger, or the survivor this time? All three can work, but you don’t have the mental strength to combine them. You’re fraying at the edges, Throneless Queen. Is it because you brought Quail and Altia to a place where they will die?”

“You’re kidding, right?” Trinity asks, a tremble of laughter in her voice. Pounding her fists together, the chaos elf licks her lips and crouches. “I’m not going to fall for all this mental warfare garbage because I’ve used the tactics myself. You’re attacking my confidence and sense of identity, which I almost fell for because I might be getting a little soft. Never forget that I’ve been tortured and known suffering since I left my mother’s womb. There are very few torments that I’ve not been subjected to. Do you really think some ancient ghost is going to accomplish what the Kernaghans and their demons couldn’t do? Nothing in this world or the next can ever break me. So, stop talking and-”

Trinity’s voice is cut off when the apparition appears in front of her and stabs a clawed hand into her stomach. Using the last of her strength, the channeler lets her body fall from the tower with a floating spell to protect it from the impact. The rest of her spirit struggles against the creature, which is watching the limp figure drift safely to the ground. White light from the stars hit a thin strand that connects Trinity’s energy to her body, but the thread is easily snipped by the apparition. Ignoring the harmless blows to the head, the creature greedily absorbs her prey and stands still while her belly gradually bloats. Releasing an echoing burp, the phantom wanders around the roof in a daze and waits for the dragons to announce her victory. Minutes of silence pass before she realizes that something is wrong and the contest is still going on.

“Oh, that’s pure genius. You left just enough energy in your body to keep the game going, but you’re defenseless now,” the apparition whispers while gazing at the channeler’s distant form. Feeling some indigestion, the guardian pounds on her chest and coughs. “You were going to use that tether to pull yourself free along with your friends. That would weaken me enough to give you time to escape or knock me out. Such a risky plan, especially after you promised to drag this fight across the city. How did you survive with such weakness?”

“You know us chaos elves. We’re very good at surviving,” Trinity replies from inside the apparition.

Charles E. Yallowitz was born, raised, and educated in New York. Then he spent a few years in Florida, realized his fear of alligators, and moved back to the Empire State. When he isn't working hard on his epic fantasy stories, Charles can be found cooking or going on whatever adventure his son has planned for the day. 'Legends of Windemere' is his first series, but it certainly won't be his last.
View all posts by Charles Yallowitz →
This entry was posted in Legends of Windemere, Path of the Traitors, Teaser Tuesday and tagged action adventure, Apparition, elves, excerpts, fantasy, ghost, Legends of Windemere, magic, Path of the Traitors, Queen Trinity, series, Sneak Peeks, sword & sorcery, teaser Tuesday, Windemere. Bookmark the permalink.