Posted on April 8, 2021 by Charles Yallowitz 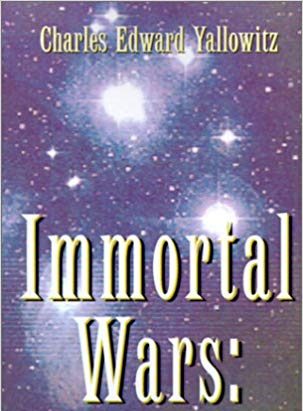 “Where the hell did you learn how to drive, Cybro!” hollers Adriana as she pushes a heavy computer monitor off her head.  As her skull inflates into its normal shape, the blond picks up her magic staff to heal her more serious injuries.  She looks around at the inside of the shuttle with papers and destroyed computers scattered all over the place.  She slowly rummages around the trash in order to find some papers that she was reading.

“I am one of the best drivers in the Milky Way.  If Tegam had not covered my eyes, we would not have crashed.  Has anyone seen my hand?  It is gone,” replies the dazed cyborg while he screws his head back on.  As soon as he sees the hand, he yanks it off the object that it has gripped onto.

“Yeouch.  I thought you didn’t like women anymore.  After all, you don’t have emotions and the important male body parts.  Unless you’ve had some improvements attached during your last refit.”

“Not those kinds of improvements.  Still, I do not like women.  They are too high maintenance for me.  Why do you ask?”

“Because your severed hand was clamped onto my thigh!  Disgusting!  Is there a lake or an ocean nearby that I clean myself in?  At least find me a bottle acid.”

The large man is busy working on the computer that had landed on Adriana’s head.  Since her skull left an imprint and dried blood on the monitor, it is hard to read the coordinates.  But after a few minutes of silence, Draveon realizes exactly where they have crashed.  A large smirk slowly crosses his face.

“I don’t believe this,” Draveon chuckles.

“Good or bad?” asks Cybro while he reattaches his human hand.  Once it is on, he picks up a nearby silver ring.  On it are five detailed, crimson pictures of specific body parts.  They are an eye, an ear, a nose, a hand, and a mouth.  This exquisite piece of jewelry also has a black gem that appears to have some kind of liquid in it.

“Well, Draveon.  Is it good or bad?” repeats the robot.

“Depends on how you look at our predicament.  We did arrive in New York City as we planned.  But there is one very small, and rather unusual, problem.  Luckily, we are still invisible thanks to Tegam’s powers being connected to the shuttle’s systems.  Even though he is knocked out, the computers are still processing his powers.  Can you pull us out, Cybro?”

“Pull us out?  Out of what?” interrupts Adriana, whose staff has become a shaft of blue light.  The light is soon shot into a squished body in a jester outfit, which finishes healing itself and stands up.

“What a rush!  Can we do it again?  Where are we anyway?” laughs Tegam.

“We’re in one of the top floors of the Empire State Building.  Please note that I said in and not on.  The bad news is that no one was hurt by our landing,” mentions Draveon as the sound of police sirens and helicopters become audible.  The shuttle starts to leave the area and lands in Central Park within fifty seconds.

“So, let’s go cause some more trouble,” Tegam says while he goes to open the door.  Adriana roughly grabs him by his spiked, red hair and pulls his ear close to her mouth.

“You are undeniably the most idiotic person in this universe.  Even Hellax isn’t dumb enough to pull that stunt while I am around.  I swear, Tegam, if you attempt another prank on us during this trip, you are going to be far worse than dead.  Do I make myself clear?” whispers the seductive immortal.

“No, but I can make myself clear.  See.”  Tegam starts disappearing and reappearing next to Adriana until she violently knees him in the groin.  He stumbles to the ground and spends the next few minutes wheezing.

“You did not tell him to stop with his jokes.  In all honestly, you should have seen that one coming.  Still, I do not understand Tegam’s reason for covering my eyes during our entry.  It could have been dangerous for us,” states Cybro, who is repairing a computer console.

“How many times do I have to tell you this, my old friend?  There is no reason to my pranks.  That is exactly what a good prank should be.  No reasons to think about.  Just comical unpredictability.  So, what’s the plan, babe?” asks Tegam in a high voice.

“Babe?  You’re asking for it!” shouts the blond.

“Calm down, Adriana.  We have to lure the guardians out into the open.  I say some random violence is definitely in order.  Am I right?” Draveon says.  He tosses a long, copper wire whip to Tegam as he kicks open the door.

“Yes, but three things must come first.  Finding out about Fate’s past will be my job.  I’ll do it in a few hours with Tegam because I want to keep him where I can see him . . .” starts Adriana as she climbs out of the ship.  The midday sun hits her face and she takes a short moment to enjoy the fresh, polluted air and warm sunlight.  After taking a deep breath she flips to the ground.

“I’m flattered,” says Tegam, who appears next to her.

“Shut up.  We also have a shopping list from Mindtrigger.  Cybro and Draveon can rob a few electronic stores for this stuff.  Have fun, boys.”  She tosses a list to Cybro, who scans it with an eye laser and then gives it to Draveon.  The robot hits a green button on his chest and his body takes the form of a dark-haired man, who is wearing an expensive-looking suit.

“Nice trick.  So, Cybro and I have to get computers of all kinds, video game systems, miscellaneous electronics, and . . . an archery set?  Why would our resident scientist want a professional bow and arrow set if his powers are to make mental weapons?  I’m a little confused.”

“Oh, that little thing.  It’s almost Christmas and Chanukah, so I have to get Kilanus something.  She also wants some pewter statues of legendary monsters.  That little list is on the back of the electronic list.  And be careful because those statues can break easily.  Can you get some of those fancy chocolates for me while you’re out shopping?  Thanks, guys.”

“Statues, electronics, chocolate, and an archery set?  This is so demeaning for a warrior like me.  Stop laughing, Tegam,” orders Cybro while he watches Adriana go into the ship and come back with a blue, satin purse.

“Have fun, suckers.  I know I will,” Tegam gasps between outbreaks of hyena-like laughter.

“Come on, Tegam.  I need your help with our job.  Remember to put everything in the ship before we cause any trouble and try to remain inconspicuous.  Here are some credit cards and some cash, Draveon.  I don’t think you should rob anything since that would start the party early,” their voluptuous leader warns them.

“What are you two going to do while we are gone?” asks Cybro while they start to leave the park.  A few young joggers pass by and pretend to ignore the four strange looking people.  They only glance at Cybro, but the take the time to stare at Adriana and Draveon.  Tegam is just laughed at by one of the younger joggers.

“You have to be kidding, Cybro.  We’re in New York City and you have to the nerve ask that question.  Hope your muscles are strong enough to lift a lot of bags and boxes, Tegam.  I have a new closet to fill with clothes.”

“Yes,” he answers when his gear grinding laughter stops.

“Maybe later.”  Adriana drags Tegam off by his arm while the other two fall onto the grass laughing.