Putting Cliffhangers in a Series 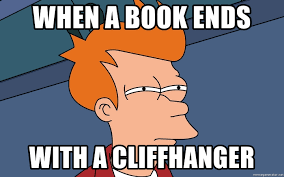 This came up in conversation and I thought about while coming to the end of War of Nytefall: Eradication.  When writing a series, you tend to have 3 types of books:

What does this have to do with the topic at hand?  Well, that 3rd category (and the 1st as well) needs an ending that brings some closure, but also has the audience ready for the next volume.  One of the best ways to do this is by creating a cliffhanger.  Compare it to TV series that do a mid-season finale or have a multi-episode story arc.  Enough is made clear to leave the audience with a good idea of the events, but you end it in a way where they won’t know what is happening next.  That’s basically what a cliffhanger is because it’s intended to carry on to more story.

Of course, people have become very twitchy about cliffhangers and you can’t really blame them for wanting to avoid such things.  How many times have we been given a suspenseful season finale or bridge book only for the series to die?  That’s not the fault of the author since they never intended for it to end that way.  At least, one would hope not.  Still, there is a fear that a finale with no closure is doomed to leave things open forever because the next volume will be blocked.  This is why cliffhangers require two important things for them to be truly effective:

That last part isn’t really pretty and it’s a nightmarish backup plan because we always want to see our projects to the end.  If not then that’s fairly sadistic because you’re gathering a following and then crushing their spirits.  Doesn’t really make for a follow up series if you plan to keep going.

Anyway, cliffhangers should be utilized very carefully and with a sense of foreshadowing.  You don’t have to know exactly what is going to happen next, but the threads you weave have to go somewhere.  It would cause a lot of damage to the overall series if you create a ‘bridge book’ that destroys or ignores all of the previous stuff.  It would be like rebooting the series and creating no true closure.  Then, you have a problem with the next volume because you either have to start fresh, work with the new, or try to phase out the ‘bridge book’ to continue the original plan.  Honestly, all of these have problems because people will notice the choppiness of the story.  Safest bet is to work with the new and try to gradually show how the original stuff continues or factors in.  This may extend your series longer than intended, but it saves you from destroying everything with a terrible or ignored cliffhanger.

So, what do you think about using cliffhangers?  Are they overdone, a high risk, or a necessary part of writing a series/episodic story?

Charles E. Yallowitz was born, raised, and educated in New York. Then he spent a few years in Florida, realized his fear of alligators, and moved back to the Empire State. When he isn't working hard on his epic fantasy stories, Charles can be found cooking or going on whatever adventure his son has planned for the day. 'Legends of Windemere' is his first series, but it certainly won't be his last.
View all posts by Charles Yallowitz →
This entry was posted in Thoughts, War of Nytefall and tagged action adventure, cliffhangers, Dawn Fangs, Eradication, fantasy, series, suspense, tension, vampires, War of Nytefall, Windemere. Bookmark the permalink.

21 Responses to Putting Cliffhangers in a Series