There’s no quirky hidden meaning there.  I’ve been doing jigsaw puzzles whenever I have time and am too exhausted to write.  That’s happened a lot because of my schedule and emotional state.  Just can’t force it and getting only 30 minutes late at night with my mind still racing isn’t a good author mindset.  So, here are the puzzles I finished since I don’t really have anything else to post about today:

This one is going to be framed and put in my son’s room.  Problem is that it’s really hard to find an 18 x 18 frame.  Need to make one and that requires time.

The angle is because this puzzle came out very glossy after the glue.  So, a direct shot had too much glare.  It’s a map of Hyrule from ‘Legend of Zelda’, but not from a specific game.  I have another one that’s from Majora’s Mask.  Really wish I could find maps from my favorites ‘Ocarina of Time’ and ‘Link to the Past’. 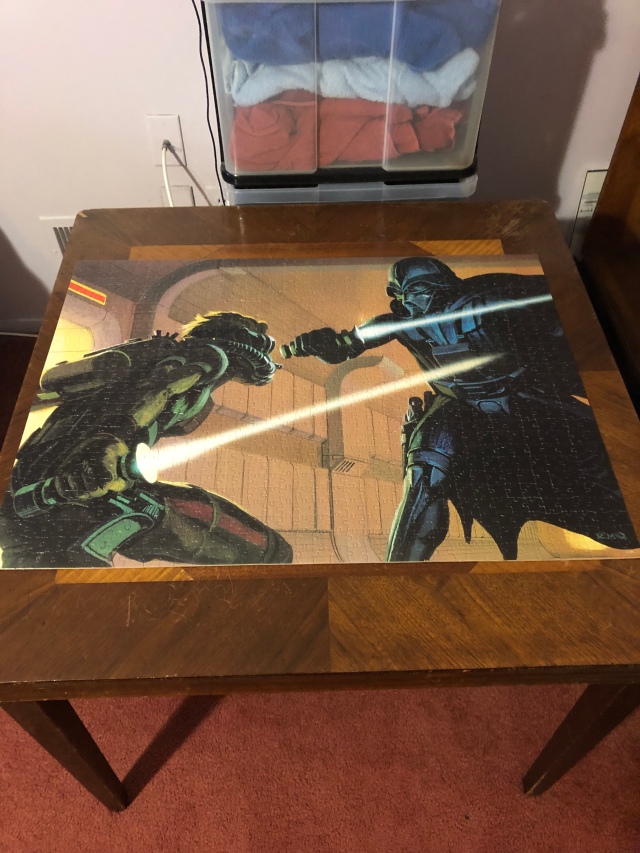 You’re going to see a lot of Star Wars because that’s the most common non-nature/Thomas Kinkade puzzle I can find.  This one was kind of a pain because there wasn’t much color variety.  I couldn’t sort through for ‘green’ and get a section done, so there was a lot of trial and error.

Same problem as the last one because of the stars and Millennium Falcon.  I finished the character section in the bottom left in one night.  After that, it was a few weeks of slowly working on it.  I will admit that it was a little easier than the last one because I was able to discern sections that I could sort pieces out for.

This is of the Johto region in Pokemon.  I didn’t really want this one, but I was at a convention and I had already bought the other 3 that the stall had.  Figured there wasn’t a reason not to since I’m just doing this to relax.  Unfortunately, I can’t claim to be the one who finished this.  During one of my training nights, my dad was getting my son ready for bed and that requires waiting for the little guy to finish his shower.  My dad saw I only had 10 pieces left to go and put them in place.  Apparently, people didn’t realize I was using the puzzles as a relaxation aide considering all of the chaos.  It did fall apart when I was putting paper underneath and preparing it for gluing though.

This is the one I just finished and it got me through the training and proctoring weeks.  It was rough because it didn’t have a little poster for me to work off of.  The front picture on the box didn’t have the whole thing on there.  A picture on the back is all I had and it wasn’t that big or clear.  It’s layered pictures with repeated figures, so I needed to see between the front ones to see about the piece I was holding.  Glad to have this one done and I’ll be gluing it between writing sessions today.

I have 7 puzzles still on the docket and I’m always looking for more.  Got a box with 4 Star Wars puzzles, a classic Legend of Zelda one, and that Majora’s Mask map.  Oh, that’s only 6.  The 7th is this 1,000 piece one by Thomas Kinkade, which I’m saving for last: 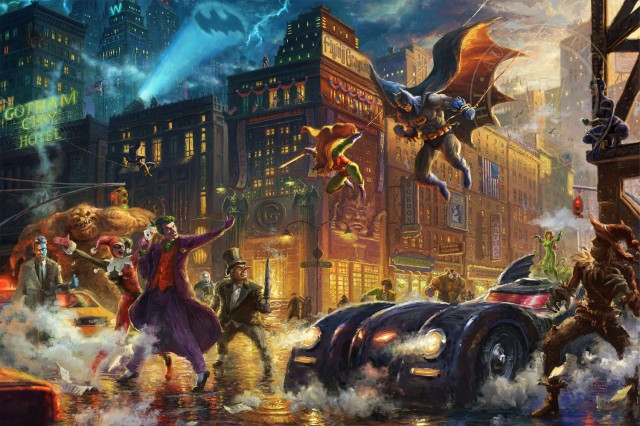 He has a few DC Heroes puzzles that I plan on getting my hands on.  My son claimed this for his room though.  He was a little upset when he saw the front because Catwoman was missing, but then we saw her on the back.

Charles E. Yallowitz was born, raised, and educated in New York. Then he spent a few years in Florida, realized his fear of alligators, and moved back to the Empire State. When he isn't working hard on his epic fantasy stories, Charles can be found cooking or going on whatever adventure his son has planned for the day. 'Legends of Windemere' is his first series, but it certainly won't be his last.
View all posts by Charles Yallowitz →
This entry was posted in Uncategorized and tagged hobbies, puzzles, relaxing. Bookmark the permalink.