Posted on January 8, 2019 by Charles Yallowitz 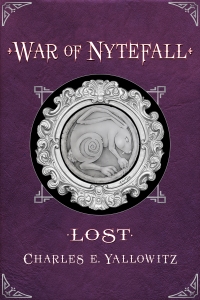 Let’s get a few War of Nytefall: Lost teasers in!  I don’t really get to highlight Bob and his powers very often.  So, here’s a fun one that shows him in his glory.

Bob frowns as he examines the two femurs in his hands, the slight difference in length forcing him to choose. He tosses the longer one over his shoulder and goes about rummaging through the rest of the bone pile for matching bones. The vampire occasionally looks up to watch the antelope herd that is grazing a mile away in a patch of clovers. Whenever one of the barrel-bodied animals runs, he freezes and hungrily licks his lips. It takes him a few minutes to find what he needs and he gleefully skips over to a smaller pile of parts that are topped with a polished saddle. Meticulously pressing the bones together, sinew-like strings drift out of Bob’s hands to bind the pieces and become invisible muscles. He sews pieces of discarded flesh onto the skeletal torso to give his new creation some protection, but knows that it will not be as good as full pelts or leather. Picking up the head, the vampire wipes dirt off the short horns and breathes into the nostrils. Yellow orbs appear in the empty sockets as he fastens the skull to the neck, which begins to weave from side to side. Repetitive clicks can be heard every time the creature shifts, the sounding stopping as its movements become more fluid. Using his backpack in place of stuffing, he straps on the saddle and takes a step back to admire his work.

Satisfied and worried that he has been gone for too long, Bob kicks his lance into his hand and leaps onto his newest steed. The undead antelope snorts and shudders at the heavy weight, which it is unable to handle until more sinew strings are added to its stocky frame. A kick to the sides sends the mount sprinting towards the herd, which runs away from the rapidly approaching creature. Bob is surprised that the squat beast is faster than most of his horses, but he finds it more difficult to control the wilder animal. Whenever he attempts to get the antelope to turn, it bucks and tries to throw him off until he gives it another kick. Hearing a crack, he looks over his shoulder to see that one of the hind legs is too brittle for such pressure. The vampire leans back to press his hand against the splintering bone and infuses it with enough aura to prevent more damage. Placing his lance in a sheath that puts it across his upper back, the Dawn Fang checks the rest of his creation for weak points and reinforces whatever needs the help. Having become more accustomed to its new existence, the antelope stops fighting beyond a few shakes of its head and rushes at top speed without showing signs of fatigue.

It is only after he goes around a hill that Bob realizes he is going away from the forest, which is on the horizon. The sharp turn causes one of the front knees to pop out of its socket and the antelope nearly trips over the useless limb. Leaning to the side, the vampire grabs the two bones and twists them back into place. It takes a minute for his steed to regain full control of the leg, but it easily returns to its breakneck pace and rushes into the forest. The uneven terrain forces it to slow down and it does nothing to keep its riding away from low branches and narrow gaps between the trees. Tired of getting hit in the face, Bob goes back to hanging off the saddle and uses his lance to knock obstacles out of his way. It is a faint tuft of fur in the center of a mushroom-covered stump that causes him to whistle for the antelope to stop. Unfamiliar with the signal, the animal continues running until he jams his weapon into the ground and flips. Gripping the beast’s sides with his legs, the Dawn Fang swings and stays in the air until the mount’s legs stop wind-milling in vain. Whispering soft words, he gradually lowers himself and leaves the antelope to eat from a feed bag filled with clovers. The food is chewed up and falls out of the skinless neck, but it is enough to keep the antelope happy and calm.

“What do we have here?” Bob asks himself. Reaching into the stump, he pulls out a familiar rabbit by the ears and pokes at its cold nose.

Charles E. Yallowitz was born, raised, and educated in New York. Then he spent a few years in Florida, realized his fear of alligators, and moved back to the Empire State. When he isn't working hard on his epic fantasy stories, Charles can be found cooking or going on whatever adventure his son has planned for the day. 'Legends of Windemere' is his first series, but it certainly won't be his last.
View all posts by Charles Yallowitz →
This entry was posted in Teaser Tuesday, War of Nytefall and tagged action adventure, antelope, Bob, Dawn Fangs, excerpts, fantasy, horses, lost, Sneak Peeks, sword & sorcery, teaser Tuesday, vampires, War of Nytefall, Windemere. Bookmark the permalink.