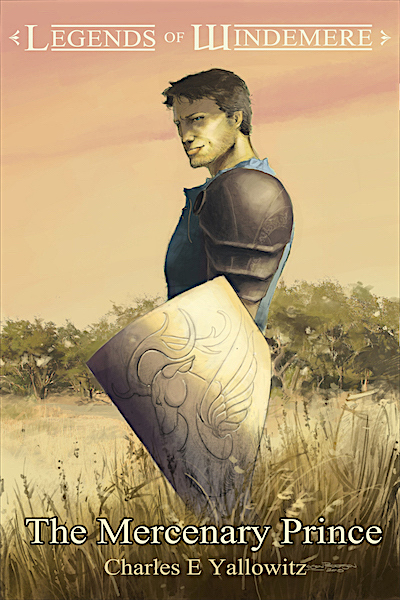 When I wrote The Mercenary Prince, I didn’t know exactly what I was doing.  It was one of two books that I added at the last minute because I realized Delvin Cunningham never had a chance to shine on his own.  Somewhere during the outlining stage, I decided to have him go toe-to-toe with Dawn Fangs.  This would be the first time I used them in more than a background or hired enemy way.  It didn’t sit well with me since it turned them into standard monsters or villains, which I realized would do harm to the War of Nytefall series.  What was I to do?

Well, I remember seeing a trick with television shows when the creators wanted to make a spin-off.  In a later season, they would make an episode that focuses on the new characters and stories.  Believe this is called a backdoor pilot.  If it’s popular then it becomes a series . . . Although, I guess it could happen it if wasn’t popular too.  The point of this might be to get a feel for how the new idea will be taken by the audience.  You can adjust between this debut and the new series as well.  If things don’t work out then you can just mark it down as a bad episode.  Needless to say, I wasn’t considering that last part an option because I wanted to make sure this worked to give a big introduction to the Dawn Fangs.

The answer was to introduce one character from War of Nytefall and have them give more information about Dawn Fang culture.  This could be seen as a spoiler since you’ll know this one survives the series, but it also adds a new question.  How did the Dawn Fangs go from Clyde and his gang to this vast global society that lives in both the shadows and the light?  Of course, I could only think of one person to use that would make any sense.  The other characters would be massive spoilers or they wouldn’t bother getting involved with Delvin.  As it stood, the one who did make an appearance wasn’t too interested in the champions.  She was there on business that simply crossed over with what he was doing.  Hence, Mab made her debut before all the others.

I enjoyed getting a feel for Mab because I felt that she would be the character right behind Clyde in terms of importance.  He definitely stands atop the pack, but there are times I think the story is more about her.  Anyway, I used The Mercenary Prince as a way to see how she would come out.  Keep in mind that I made her more jagged around the edges because she’s been through some things in her own series.  Still, it was a fairly successful outing in my opinion because I accomplished the following:

The one thing I didn’t do, which I admit was a mistake, was show that Dawn Fangs could eat more than blood.  This had already been put into their design, but I never bothered having Mab drink anything more than blood.  So, I had a problem of continuity between the two series.  Why would this happen?  Well, I plan on fixing it soon by establishing that the Dawn Fangs have spent a lot of time pretending to be other species.  Some hid among traditional vampires while others among mortals, which determined the type of diet they would eat in the open.  Also, they will drink blood around those who smell of power in order to keep their own energy high and as an act of intimidation.  Delvin being a champion fit the bill and the older Mab is more into intimidation than the stealthier younger version.  This is all stuff that I have to slip into War of Nytefall, which is another demonstration of continuity.

Thankfully, this introduction went smoothly and it did get some people interested in the Dawn Fangs.  With it only being Mab showing up, the chance of continuity issues is reduced.  The worst that could happen is that I screw up her younger self, but I was repeatedly going back to my notes on her to make sure I stuck the landing.  The shadow traveling was different, but that’s because she’s much older and other things happened in that realm.  You can’t have everything the same, but at least I only have to explain how things got there.  Sometimes having the ending is better than having the beginning.

Charles E. Yallowitz was born, raised, and educated in New York. Then he spent a few years in Florida, realized his fear of alligators, and moved back to the Empire State. When he isn't working hard on his epic fantasy stories, Charles can be found cooking or going on whatever adventure his son has planned for the day. 'Legends of Windemere' is his first series, but it certainly won't be his last.
View all posts by Charles Yallowitz →
This entry was posted in Legends of Windemere, The Mercenary Prince, War of Nytefall and tagged crossovers, Dawn Fangs, fantasy, Legends of Windemere, Mab, sword & sorcery, testing characters, The Mercenary Prince, vampires, War of Nytefall. Bookmark the permalink.

18 Responses to Testing the Waters: Future Heroes Visiting Current Ones