Creatures of Fear: Spiders . . . I’ll Really Have to Muscle Through This One

Posted on February 21, 2018 by Charles Yallowitz 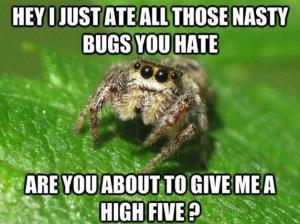 I had to make it a funny meme because this is something that will lock me up, make me cry, and pray for unconsciousness.  Even that picture is a tough one since spiders freak me out.  I’ve gotten better with being able to see them at a distance, but one move in my direction sets off my fight or flight instinct.  Worst is when you run into a spider in the shower and you don’t have your glasses on.  So, all you see is a creeping blur and you aren’t sure what it is.  At first, you think it’s your imagination, but then it sticks around.  Ignoring past experiences, you lean in close enough to get a look and that’s when it strikes you that your naked, drenched, and the door is closed.

Sticking with my own personal experiences, I think part of it stems from an incident when I was younger.  There was a large web at camp and we were flicking tiny rocks at it.  I kept doing it after the other kids left and ended up getting closer.  Next thing I know, something landed on my face and crawled along my skin.  There was a brief, frozen moment of wonder until things clicked.  I flailed and screamed while the spider got up my nose for a bit, but I swear was an hour.  Sneezed it out and watched it run away with nobody really noticing because it probably happened faster than it felt.  Ever since then, I could only deal with spiders when they were really humans wearing spandex and fighting crime.

Now, I’d love to sit here and go over why one could fear spiders like I did with snakes, but I know this isn’t a rational one.  Is it the venomous angle again?  Yes even though I know that the spiders around here typically aren’t venomous.  There are occasional incidents with brown recluses that have stowed away on somebody’s luggage, but that’s really it.  It could be another ancient instinct created as humans learned that this tiny creatures could kill them.  Is it also the hairy bodies and soulless eyes?  Yes and I stand by those statements.  What about how they seem to just turn up in a corner or come dropping from the ceiling to terrify you during your favorite TV show?  I really need to keep a flyswatter near my bed.

The knowledge that they eat bad insects and are helpful doesn’t really break through because we are talking about an irrational fear.  There’s just something about spiders that drives me away.  Yet, we need to have a reason for this in fiction.  People have trouble accepting that a character is scared of spiders just because they are.  Even a minor incident can result in complaints as if phobias only stem from major traumas.  This is probably because people expect it to be a hurdle that is defeated through realizing the initial event was in the past or not what it seemed.  Maybe that spider was really eating a malaria-carrying mosquito and didn’t mean to land in your eye.

For example, Luke Callindor starts with arachnophobia and gradually gets a slight handle on it.  This was revealed in Beginning of a Hero when he froze at the sight of a tiny spider dangling in front of his face.  The winged and horned spiders Curse of the Dark Wind didn’t do him any wonders either.  Still, there were a few complaints over the years when I had this without an explanation.  This is prior to publishing and during the time I was letting anyone read it.  Readers said that it made him appear too weak to be a hero if he was irrationally scared of spiders.  I didn’t really understand that, but I went along and had it that he got trapped in a large spider infested area as a child.  Luke was rescued by his grandfather, but one of the spiders was hiding in his backpack.  It crawled out that night and attacked him in his bed.  Geez, just writing that is making my skin squirm and pulse quicken.

I really should try to defend spiders here.  They are important organisms for any ecosystem and it isn’t their fault that they’re creepy.  Doubt they even consider our emotions and feelings on the subject, which is how it should be.  Though, would it really hurt them to avoid the shower and not go for the face?  Okay, this definitely isn’t working like I’d hoped.  Anybody want to take over in the comments?  Feel free.

Charles E. Yallowitz was born, raised, and educated in New York. Then he spent a few years in Florida, realized his fear of alligators, and moved back to the Empire State. When he isn't working hard on his epic fantasy stories, Charles can be found cooking or going on whatever adventure his son has planned for the day. 'Legends of Windemere' is his first series, but it certainly won't be his last.
View all posts by Charles Yallowitz →
This entry was posted in Thoughts and tagged animals, arachnaphobia, fear, phobias, spiders, terror. Bookmark the permalink.

53 Responses to Creatures of Fear: Spiders . . . I’ll Really Have to Muscle Through This One