Celebrate #Christmas and #Hanukkah with 6 #fantasy adventures for $2!

Posted on December 25, 2016 by Charles Yallowitz

There’s still time to get the first 6 volumes of
LEGENDS OF WINDEMERE
for $2!

*This Book Bundle contains the first 3 volumes of the LEGENDS OF WINDEMERE fantasy series.*

Every hero must take that first courageous step into adventure. For Luke Callindor, it’s more of a blind stumble. From battling a demonic assassin to facing the family he left behind, this warrior’s adventuring career has been one awkward mistake after another. Most days the only things that keep him alive, yet never unharmed, are his trusted friends and his reckless courage. How long can his luck hold out before the gods of Windemere decide to cut his legend short? 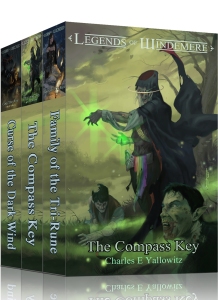 *This Book Bundle contains volumes 4-6 of the LEGENDS OF WINDEMERE fantasy series.*

The destiny of Nyx, Sari, and Luke Callindor has been revealed, but that does not make their lives any easier. With old enemies still on the hunt, a new threat is stepping out of the shadows to indulge his sadistic desires. From battling the magic-devouring Krypters in Hero’s Gate to facing a demonic curse that has befallen one of our heroes, the champions will be pushed to their limits and beyond. Can the arrival of two more destined warriors improve their chances or will it bring them one step closer to failing like their predecessors?

And don’t forget the newest installment:

Born from the light and darkness, Dariana can no longer avoid her fate.

The final corrupted temple stands between the champions and Baron Kernaghan having their great battle. Only one problem: the Compass Key refuses to work with Dariana, who long ago wiped all memories of the Spirit Well from her mind. Now, they are forced to follow a trail of clues that Dariana’s former self left behind centuries ago. It is a path that will lead the champions into a part of their friend’s past that could tear them all apart.

Will the bonds of friendship be stronger than the call of blood?

All other volumes are listed below for $2.99 as well: