Where Do Things Stand? The Mercenary Prince & Crossing Bedlam

Posted on January 2, 2016 by Charles Yallowitz 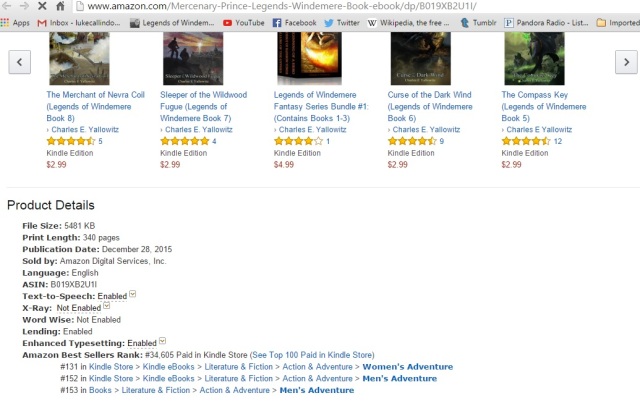 That’s where Legends of Windemere: The Mercenary Prince is standing right now and I hope it can break the 30,000 mark soon.  It’s been dancing around this for the last two days, so it’d be nice to get into the Top 100 by the end of the first week.  Then again, I think I’m on a bunch of ones for New Releases.

Now people are probably wondering why I’m on Woman’s Adventures and Men’s Adventures with this book.  I’m on Sword & Sorcery, Action & Adventure, Epic Fantasy, and Vampires too, but Amazon only shows your 3 best rankings.  I stumbled onto these others lists and figured it was worth doing.  Nyx has a big plot line in this book alongside Delvin’s, so she should get some credit along with what happens to Trinity and the new character, Mab.  I’ll admit to feeling a little guilty about stretching this information to list the categories.  Then again, Sword & Sorcery is peppered with paranormal romance and shapeshifter erotica these days.  Not to mention it seems new editions of Harry Potter were released in various languages on December 8th.  Something about seeing 3 version of ‘Sorcerer/Philosopher Stone’ on the same ranking page is weird.

Anyway, I’m trying to think of ways to promote the new book.  I’ve used my regular sites and have half a month of hype coming.  The other half will be Crossing Bedlam, but we’ll get to that in a bit.  I’m thinking of going back to scheduling tweets the day before with one going live every 3 hours.  This means I’ll turn up more in the ever flowing feeds of Twitter.  The hard part is the new school schedule makes that really tough.  I probably have to accept that some tweets will be one behind the other instead of divided by retweets.  This is really all I have in mind since I won’t do freebies and I already set up a bunch of guest posts.  I mean, I know of some tactics I could use, but they would require the discarding of all shame and self-respect.

Getting back to the first release of 2016 . . . I haven’t touched it yet.  This week is going to be all about editing.  Funny thing is I have targets in mind to straighten things up.  Lloyd will lose a few jokes that don’t work and Cassidy will get some extra stuff about her mother.  I want Lloyd to explain why so many serial killers end up with machetes too.  Think I need to clean up some of Katie’s parts as well.  Didn’t really put this through beta reading, but my determination to do a February 5th or 12th makes that an impossibility at this point.  Need to make contact about cover art too now that the holidays are over and the kid is going back to school.

Honestly, I’m focusing more on figuring out what the second book will be about.  I have a list of 9-10 stories that Lloyd and Cassidy can stumble into.  I say 9-10 only because one might be impossible if I remain too picky.  I did manage to write all the blurbs for the first book, which I’ll share at some point when things settle down.

This feels like it would be a ‘goal post’, but I’m saving that for tomorrow and making it for the upcoming year.  Partially because that needs more thought and also because the last week saw me get a whopping nada done on new projects.  All I did was jot down that Cassidy gets amorous when she has tequila, which had to be done.  The woman really didn’t have any weak points unlike Lloyd who is distracted by women, alcohol, food, pointy objects, shiny objects, and his own voice.

Charles E. Yallowitz was born, raised, and educated in New York. Then he spent a few years in Florida, realized his fear of alligators, and moved back to the Empire State. When he isn't working hard on his epic fantasy stories, Charles can be found cooking or going on whatever adventure his son has planned for the day. 'Legends of Windemere' is his first series, but it certainly won't be his last.
View all posts by Charles Yallowitz →
This entry was posted in Uncategorized and tagged 2016, action, adventure, amazon, Crossing Bedlam, editing, Legends of Windemere, magic, Mercenary Prince, new year, series, updates, Windemere, writing. Bookmark the permalink.

9 Responses to Where Do Things Stand? The Mercenary Prince & Crossing Bedlam