How did you not see that coming? Tales Already Told

Posted on November 9, 2015 by Charles Yallowitz 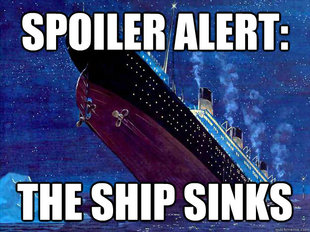 A while back I got into BBC’s Merlin and part of the fun was seeing the new take on the old tale.  So when characters I remember from the few stories I read showed up, I was excited and intrigued.  Sure, it took liberties, but that’s what I expected.  As long as some of the key points were struck like Mordred being Arthur’s downfall and teaming up with Morgana.  I mean, everyone knows Arthur dies in the legend and is sent to Avalon where he sleeps until he’s needed again.  Right?

Apparently not.  Much like those who didn’t realize the Titanic would sink or that King Kong would fall off the Empire State Building, I found many who hated the ending.  They didn’t realize that was the only way it could have ended.  It’s how it always ends.  But you had people screaming for another season, saying that Mordred would never do what he did, or that Arthur could never be killed.  Bad writing, actors wanted out of contracts, and a whole slew of ridiculous arguments about why it happened.  Only a handful eventually understood that it’s how it was always meant to be.

This makes me wonder about the tales that are always getting told.  We know these so well and get curious about retellings.  Although Hollywood seems to be abusing that curiosity to the point where I think a restraining order is necessary.  Anyway, we’re happy to see a new twist that is also respectful to the source material.  Just keep the core the same and hit the proper notes to keep it connected.  I can think of an August movie that got slammed for spitting on the source material.  So fans of the original are going to be hard to please just as new people might not like it when you stick to pieces of the original.  It’s rather head-spinning confusing from the artist’s perspective.

Now as an author, I can respect those who try to touch on a classic and give it their own twist without losing the essence.  It’s not easy to do and most fail than succeed.  For example, I read a book long ago called The Looking Glass Wars, which was a retelling of Alice in Wonderland.  This one story has been pounced on all the time, but I really enjoyed this version that gave a magic and sci-fi feel to it.  Things were totally different and yet had some familiarity.  I’d recommend it, especially since it goes into an area that means you won’t get the same ending as the original and you’re okay with that.

I’m not sure what I should ask here.  I know people are passionate about their hatred of remakes/reboots/retellings.  That’s a door that I’d rather not open again.  So, what do you think when you hear someone get surprised by the ending of something that stems from a long-existing source?  Like those people who got upset when you mentioned that the Titanic sank even though you saw it happen in the commercial.

Charles E. Yallowitz was born, raised, and educated in New York. Then he spent a few years in Florida, realized his fear of alligators, and moved back to the Empire State. When he isn't working hard on his epic fantasy stories, Charles can be found cooking or going on whatever adventure his son has planned for the day. 'Legends of Windemere' is his first series, but it certainly won't be his last.
View all posts by Charles Yallowitz →
This entry was posted in Thoughts and tagged audience, author, how did you not know about that, merlin, reboots, remakes, retellings, spoilers, tension, titanic, traditional tales, writing. Bookmark the permalink.

21 Responses to How did you not see that coming? Tales Already Told