Posted on October 6, 2021 by Charles Yallowitz 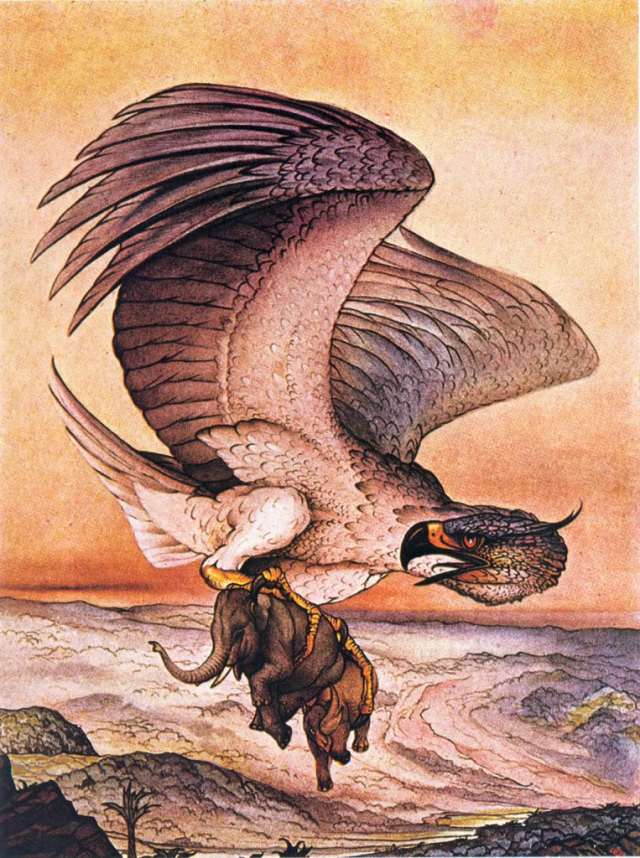 Way back in August, I made a poll for people to pick the 4 monsters of Windemere to highlight this month.  3 were tied for the top spot, so I picked one of them to start things off.  I give you:

These are incredibly common fantasy creatures because they’re simplistic.  I’ve read two different origins of these beasts.  One is Sinbad the Sailor and the 1001 Arabian Nights where he runs into a giant eagle, which people assume is a roc.  This gets thrown around, but I think the more common vision comes from India.  This is a myth about an eagle so large that it can carry an elephant.  Sometimes, it’s said they can carry one elephant in each claw.  So, the real description of a roc is that it’s a gigantic eagle.  Nothing really flashy about it.

It’s that lack of flashiness that makes it fall behind phoenixes and thunderbirds when people imagine bird-like monsters.  Still, the roc gets a lot of love fantasy because they are connected to Tolkien’s eagles.  Only real rocs don’t talk and I genuinely think the Middle Earth eagles are smaller than rocs.  Splitting hairs there, but that’s just me.  It also explains why I went the way I did with rocs.

Initially, I created the Windemere rocs with the intention of them being the natural rivals of griffins.  I wanted something in the sky that didn’t have range attacks like dragons and were simply huge.  Going through old notes from high school, I found that I used the roc a lot whenever I needed an aerial monster.  So, I flushed it out without change the appearance of it being a giant eagle.  The key strengths I was focusing on was silent flight and enormous power, which would counter the speed of a griffin.  Sure a roc has to catch a griffin, but even a glancing blow is enough to shatter bones.  This was done in the span of a few minutes, but the simplicity is why I go back to them at times.

Rocs show up a few times in Legends of Windemere, but they make an impact.  I don’t believe I ever had them actually fight a griffin even though I wanted that to happen.  (Added note: I actually think I did have it happen. Hard to remember every event in a 15 book series.)  This resulted in the rocs becoming large beasts encountered for various reasons.  The two big ones were showing how the Dark Wind curse was hurting even the most powerful of air creatures.  Another was introducing a flock of rocs that protected a mountain and actually lived inside it.  This explained why a certain plot point was possible.  There were other types of large birds, but I’m not sure I can count them as rocs unless they’re eagles.  Still on the fence about that.

Both times involved Luke Callindor too.  His affinity for animals helped me show how these aren’t savage beasts.  I was able to demonstrate that they cared for their young and territory.  They could also be territorial without being intrusively aggressive.  Many stories will have a territorial animal that gets in the way of the plot because it’s impossible to neatly get around it.  This typically ends with the animal being killed, but I’m not always a fan of that.

With the rocs, I wanted them to be protective without making it necessary for Luke to wipe them out.  It forced me to develop habits for the rocs such as patrolling and how big a creature has to be for them to consider it a threat.  This meant, they were fairly intelligent, which changed my use of them a bit more.  If they’re smart enough to differentiate between threats and harmless animals then I couldn’t make them the rampaging, temperamental beast I originally considered.  This is probably why I don’t use them as often as I used to.  Now, I need to come up with a reason for a roc to be there.  At least, I still have the berserker perytons and territorial harpies.

That’s really it on the rocs.  I do try to change up the look of some flocks, so I might be branching the out to be regional species.  We’ll see what the future holds.

Charles E. Yallowitz was born, raised, and educated in New York. Then he spent a few years in Florida, realized his fear of alligators, and moved back to the Empire State. When he isn't working hard on his epic fantasy stories, Charles can be found cooking or going on whatever adventure his son has planned for the day. 'Legends of Windemere' is his first series, but it certainly won't be his last.
View all posts by Charles Yallowitz →
This entry was posted in Legends of Windemere and tagged eagles, fantasy, halloween, Legends of Windemere, monsters, october, roc, Windemere. Bookmark the permalink.

13 Responses to Monsters of Windemere: Roc