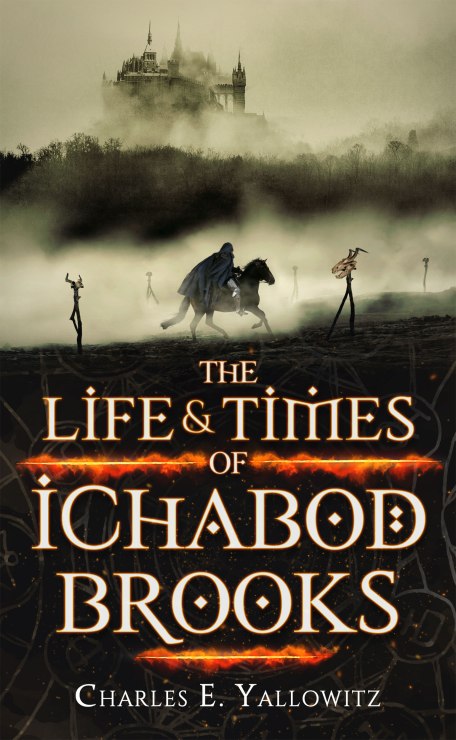 Wouldn’t be a run of teasers if I didn’t end a fan favorite.  Here we have a piece from The Life & Times of Ichabod Brooks.  Since this is a collection of short stories, it’s hard to pick something that isn’t too much, so II picked a random one and grabbed a chunk with some action. This comes from Ichabod Brooks & The King of Nowhere.  Enjoy!

With nothing more than the crimson moonlight to guide him, Ichabod wanders through the forest outside of Vorgabog. He takes comfort from the hooting owls and shifting noises from the underbrush, the presence of animals telling him that there is no danger. He does his best to remain silent and stick to the shadows, but he routinely finds a dry stick that snaps at the slightest touch. Ichabod is sure the echo is a figment of his imagination and only creatures with a keen sense of smell would know he is nearby. Still, there is a tension in the air that he cannot shake, as if something deep within his gut is telling him to be careful. It would not be the first time his instincts were sharper than his senses, which is the reason he is roaming the woods instead of traveling on the open road. Keeping the dirt path on his left, the adventurer occasionally gets close enough to hide in a bush and watch for suspicious travelers. His sole encounter on the road has been a lazy bear that showed more interest in a discarded pot than the armed human. One look at the longbow and Ichabod’s steely gaze was enough to make the animal settle for the scraps left by recent travelers.

It is nearly midnight when a new sound catches the adventurer’s attention and draws him toward a lake. The sound is of rapid footsteps and clapping hands, which are randomly joined by a series of wild hoots. It takes Ichabod several minutes to reach the edge of the trees without making a noise, but he soon realizes that he might have been cautious for no reason. A rag-wearing man with wild, white hair and a matching beard is dancing on the shore. His bare feet squish into the mud, which is covered in prints from what looks to have been hours of stomping and jumping. Adding to his strangeness, one of his ears is pointed like that of an elf, but the other is rounded. Proving to be more agile and spry than he appears, the man stops with his legs spread and does a flipping leap while hooting like an owl. He lands on one toe and gracefully spins, so that he is facing the trees. For a moment, Ichabod believes that the hermit is staring directly at him and he catches a visible sparkle in the man’s dark eyes. Instead of approaching, the dancer does a cartwheel and comes up with a frog that he kisses before releasing the calm animal into the water.

“I’ve been around long enough to know a clue when I see one,” the adventurer whispers while he remains in the shadows. Rustling trees and a faint splash give him pause, the noises standing out from the rest of the forest’s sounds. “Come on, old man. Please tell me you heard that and plan on running away. Last thing I want is to fight while protecting someone. Then again, why should luck ever be on my side?”

Scanning the lake for danger, Ichabod notices a long, dark figure swimming toward the oblivious hermit. The back of the shadow swings like the tail of an alligator, but the veteran knows such a beast would never be found in the area. Taking careful aim, he waits to be sure it is not a hungry predator that is merely following its instincts and stomach. The instant he sees the telltale glint of metal in the water, Ichabod fires and stuns the would-be assassin. As the killer sinks to the bottom, the trees rustle and an arrow narrowly misses the dancing old man. The projectile sticks into the mud and the hermit plucks it up as if it had always been there. Stroking the feathered shaft like it is an injured bird, he continues flipping and moving while every shot misses him. Within a minute, he has gathered five arrows and has added juggling to his strange celebration.

Unable to see the other enemies, Ichabod rushes out of the shadows in the hopes of drawing fire away from the hermit. Wishing he had a way to defend himself, the adventurer moves as randomly as possible to make himself harder to hit. An arrow comes from behind to skim his side, the wound helping him figure out the trajectory. Responding with three shots in a tight cluster, Ichabod watches an unconscious figure fall out of a tree. The pause is enough to give one of the other assassin’s a chance to shoot the adventurer in the back. He hears the twang of a bowstring and tries to twist away to avoid the kill shot, but the attack never lands. The grinning old man stands with the arrow held tightly in his fist, its position allowing Ichabod to hit the other archer.

“The bugs around here can be quite pesky,” the hermit happily states before returning to his dance.

Charles E. Yallowitz was born, raised, and educated in New York. Then he spent a few years in Florida, realized his fear of alligators, and moved back to the Empire State. When he isn't working hard on his epic fantasy stories, Charles can be found cooking or going on whatever adventure his son has planned for the day. 'Legends of Windemere' is his first series, but it certainly won't be his last.
View all posts by Charles Yallowitz →
This entry was posted in Ichabod Brooks, Teaser Tuesday and tagged action adventure, adventure, adventuring, archer, archery, borders, cultists, epic fantasy, excerpts, fantasy, heroes, high fantasy, Ichabod Brooks, King of Nowhere, magic, short stories, sword & sorcery, teasers. Bookmark the permalink.