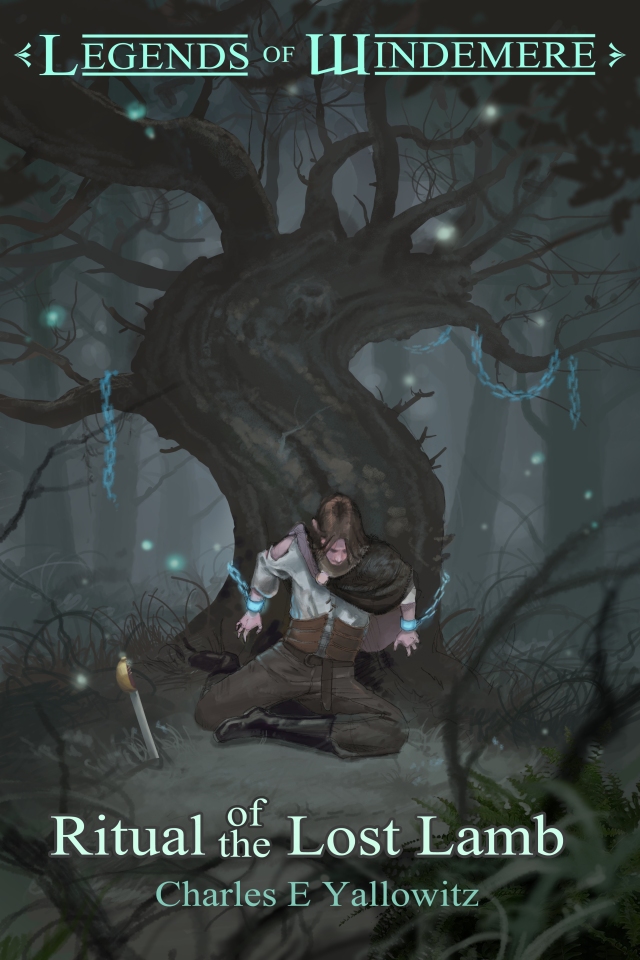 The oddest thing is that I don’t seem to have any Teaser Tuesdays in regards to Legends of Windemere: Ritual of the Lost Lamb.  I know I made some, but I can’t find them within any searches.  Guess I was fairly disorganized back then.  Still, I find it weird that I’d never do teasers for this major turning point of a book.  Might as well put a big one that could be a major spoiler.  Feel free to buy the book to see how it ends.  🙂

“You don’t get the boy until you finish fighting me,” Selenia declares, waving for her protégé to come closer. Another blast from her longsword sends the demon knight further away from the academy, the creature remaining in a crouch. “I’m giving you a chance to retreat, but it won’t do you any good. I plan on hunting you down if you run.”

“What are you doing?” Delvin asks when he gets close enough to whisper. The arched eyebrow and twitching lip of the short woman make his heart stutter, the half-elf’s determination at a level he has never seen before. “You’re injured, Selenia. Let me handle this fight. My enemy is the one who sent this demon here in the first place. Go to the priests and let them heal you. I promise that I’ll be fine.”

“Lend me your shield, Cunningham,” the headmistress sternly requests, holding out her arm for the enchanted armor. She nods to Timoran and Nyx, the pair joining the small group as Delvin does what his mentor has asked. “Thank you. Now, you do make some good points. This demon has a bigger interest in you than me, which means it is meant to be your enemy. On the other hand, that monster threatened my students and damaged my academy. I take those actions very personally, which means it needs to finish its business with me. By the way, I expect that Sword Dragon head to be returned to my office before you go on your next adventure, Ms. Masterson. Yes, I’m pretty sure it was you who did that.”

Delvin holds up a hand to stop Nyx from talking, his eyes narrowing in suspicion. “What aren’t you telling me? This is something you’d never take away from me before. Especially since your ribs are broken and you probably haven’t eaten much in the last few days. You taught me to never enter a fight when you’re at a disadvantage.”

“True, but the exception is if entering a fight ruins your enemy’s plans,” Selenia states as she lifts her shirt. A pulsing patch of black is on her lower back, the small cut in its center releasing an acidic pus that is creeping along her skin. “I was poisoned and put in some stasis spell after being captured. Probably have thirty minutes left if I relax and remain calm. The priests here aren’t strong enough to cure something so potent either. You see, the plan was to make you fight that demon with the idea that you were saving me. Then you would learn that it was for nothing and I was going to die anyway. Apparently, whoever put this plan together thinks I’d sit back and let it happen. You might want to make contact with Rainbow Tower and Tzefira too if the goal is to make all of you suffer.”

“Not without weakening yourself before the fight.”

Selenia walks by Delvin to greet the rattling cart and catch Dariana as the exhausted telepath collapses. She hands the groaning champion to Timoran before helping Kevin to the ground, the old man muttering complaints. He stops when he sees the look on his old friend’s face and crosses his arms as if he is about to argue with her. Spotting a hint of blood in the corner of the half-elf’s mouth, the veteran realizes that there is nothing he can say to stop her. Duggan hurries around the cart to ask for orders, but his voice disappears when he silently reads the expressions of his companions. The dwarf sighs in frustration and kicks a nearby wheel, which splinters from the solid impact. Without a word, the two men walk alongside their leader, the sudden advance forcing Delvin to fall in behind the people who raised him.

“I prefer this to dying of old age,” Selenia says, her lavender eyes locked on the demon. She can see it has become tense, the creature unsure of what to do since it is no longer fighting Delvin. “Send a message to Betty, Skyblade, and the Callindors. Not sure if they can make the funeral since it’ll be tomorrow. No sense wasting more than one class day on me, especially with all of the repairs needing to be done. Just tell my brother that he was probably the smartest of our family. Not the most ambitious, but definitely the smartest. There’s a letter in my desk for my parents too. Think that covers all the important stuff.”

“Nothing for us?” Delvin asks, earning glares from the three veterans. He refuses to back down even when Selenia blindly fires a lightning bolt to keep the demon at bay. “I know you don’t like face-to-face goodbyes, but this is different. We won’t wake up in the morning to find you leading the run. I can’t come back here to spar with you. This isn’t like the other times we parted ways.”

“You’ll do fine with this place, Delvin,” the half-elf replies, her voice softening. Not wanting to drop any of her gear, she gives the young warrior an awkward hug around the neck. “I trained you to the best of my ability and you grew into a great leader. The only thing I want you to do is stop taking things so personally. Failures hurt and not letting them go will turn you more into me than anyone should be. As for the most loyal and appreciated thorns in my butt, I can’t really think of anything sappy to say. Duggan has my permission to drink publicly and share his stash with the students for a full week after the funeral. Not that I think you would do anything else, but now you can celebrate without guilt. Masterson . . . clean your office or I’m coming back to haunt you.”

“Eh, I have the Duragians to save me, so do your worst,” the old man claims with a wide grin. He is about to pull the half-elf into a bear hug, but stops when he gets a clear look at her wound. “Still not a good way to go if you ask me. Don’t send this thing back to the Chaos Void. Kill it for good.”

“I’ll try, but only if Uli is willing to grant me a final gift.”

With her hands full, Selenia taps Kevin’s good shoulder with the edge of the shield and approaches the demon. A pulse of comfort rushes over the warrior and she catches the reflection of the Elven Goddess in her blade. Releasing a long breath, she stops her advance and closes her eyes to clear her mind of all distractions. Jolts of pain ripple along her lower back and she finds it difficult to twist her upper body. A numbness is threatening to creep down her right leg and her stomach is tight from getting hit by some of the poison. Even with her injuries, Selenia is confident that she will never fail, especially with all of her students watching.

Charles E. Yallowitz was born, raised, and educated in New York. Then he spent a few years in Florida, realized his fear of alligators, and moved back to the Empire State. When he isn't working hard on his epic fantasy stories, Charles can be found cooking or going on whatever adventure his son has planned for the day. 'Legends of Windemere' is his first series, but it certainly won't be his last.
View all posts by Charles Yallowitz →
This entry was posted in Legends of Windemere, Ritual of the Lost Lamb, Teaser Tuesday and tagged demons, excerpts, fantasy, Legends of Windemere, magic, Ritual of the Lost Lamb, Selenia Hamilton, sneak peek, sword & sorcery, teaser Tuesday, The Mercenary Queen. Bookmark the permalink.