Posted on January 10, 2020 by Charles Yallowitz

This went live on September 9, 2019 and I’m not shocked to see that one of the ‘pervert’ posts made it on here.  Although, I remember check the Top 5 a week before 2019 ended and these posts weren’t close.  They must have gotten a boost in views.  A lot of debating happened over this topic and I’m sure it’ll happen again down below. 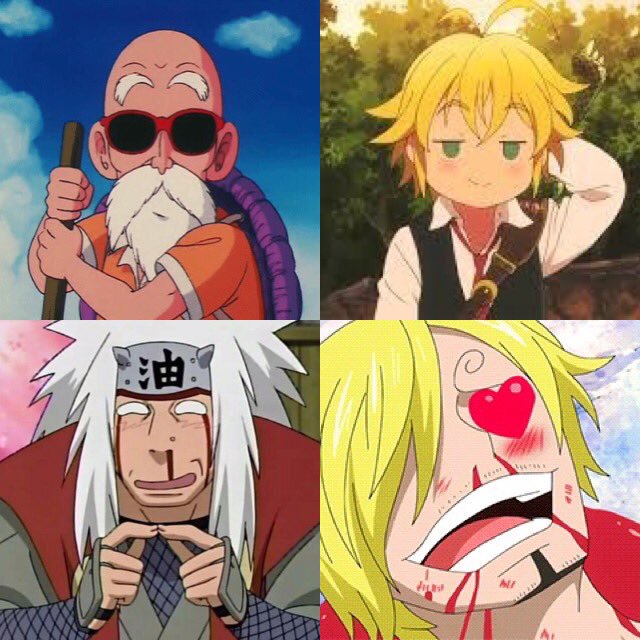 This is a topic that I’ve been tempted to do for a long time, but I was never sure how it would go over.  Wednesday’s ‘7 Tips’ post is probably going to be worse.  Yet, I’ve been wondering a lot about this archetype after finishing ‘Naruto’, continuing ‘One Piece’, starting ‘Inuyasha’, and talking about ‘Dragonball’.  You’ll notice that all of these are animes and mangas.  To be honest, I can’t think of an American show or movie with a perverted character who isn’t a villain.  So, why is that?

Much of it has to do with cultural taboos.  I think.  Here’s the problem.  I tried to look all of this up and found essay after essay on the topic.  Half of them explained that Japanese culture is more open to nakedness and male desire (not female desire), so this is an acceptable character.  Meanwhile, America has been heavily influenced from the beginning by Christianity, which demonizes nakedness and sex.  So, we would put perverts down as villains while the Japanese have them more as comical heroes.  Still, I couldn’t quite get a full understanding because the Internet is filled with articles by Americans complaining about the perverted characters.  There was a feeling that our cultural sensibilities and standards were being used in place of the one where the stories were created.  This makes it a difficult opinion to go by because it only shows one side.  In the end, I think it does come down to one culture being more open to these types of characters while the other doesn’t like them.  (I’m pretty sure many people who read my blog are already rushing to the comments in order to voice their complaint about the archetype.)

Now, this seems to be only male characters, but I’ve heard that there is a trend of female perverts starting up.  I’ll touch on this a bit more on Friday.  As far as scope, these characters tend to be shameless womanizers who peep and hit on for the most part.  An exception in the picture above is Meliodas who gropes one of the female leads.  (This is one reason I prefer Ban who is a gentleman.)  Still, there is typically a punishment for their actions too.  This is done for comedic effect because the result is always violent.  A slap that sends them skyward, a punch that puts them in the hospital, nosebleeds, heavy objects being smashed on top of them, or something else that befalls the pervert.  Weirdest thing is they will shift right back to a stable character and this ‘quirk’ is put on the back burner until more comedy is needed.

There are some accidental perverts too.  Keitaro from ‘Love Hina’ tends to blunder into situations where he sees one of the female characters naked.  Then he’s punched and sent into the stratosphere.  Not sure where this falls into the category.  Unlike Meliodas, he doesn’t do these things on purpose.  In fact, there are many degrees here.  Sanji (One Piece) mostly hits on female characters by praising their beauty, which is different than Miroku (Inuyasha) asking for women to bare his children.  There is a plot reason for him doing that in case you were wondering and I just realized that he gropes too.  Going further we have Jiraiya of ‘Naruto’ actively peeping on bathing women.  Then you have the gropers like Meliodas and going further we have. . . Well, ‘Neon Genesis Evangelion’ is on Netflix now.  Anyone who has seen the whole series probably knows what I’m talking about.  My point is that this character type does seem to have levels, but all of them boil down to ‘pervert’.

In the end, this is something that I don’t think would go over well in an American story.  It might get some laughs in a sitcom, but you’d have many complaints about the character’s actions.  The classic womanizer is one thing, but peeping toms and gropers, regardless of the punishments, are crossing a line for many people.  At least in this country because much of it depends on what is acceptable in one’s society.  As I said, I saw many articles condemning these characters while others talked about how well-rounded they are since the perverted behavior is a single part.  For example, Jirayai is a peeping tom, but he is a powerful ninja and a wise mentor to Naruto.  Could he be those things without the pervert aspect?  Yes, but that isn’t how he was made and the perverted old mentor does seem to be a thing at times.  They fall under the ‘dirty old man’ label.

Well, I’ve opened Pandora’s Box here.  I’m sure anyone who hasn’t watched anime or read manga will have a little trouble here.  Perhaps these characters are the reason you never got into them.  I have read plenty of series where there isn’t a pervert like ‘Fullmetal Alchemist’, ‘Black Cat’, ‘Cowboy Bebop’, and many others.  Just seems this is a fairly common archetype.  Let’s just try and stay civil in the comments, especially if I try to play Devil’s Advocate.

Miroku getting the usual reaction from Sango

By the way, I really don’t know if I’m going to ever write a character like this.  I tried a little with Fritz Warrenberg in Beginning of a Hero, but he really was more of a dirty flirt than anything like I’ve talked about here.

Charles E. Yallowitz was born, raised, and educated in New York. Then he spent a few years in Florida, realized his fear of alligators, and moved back to the Empire State. When he isn't working hard on his epic fantasy stories, Charles can be found cooking or going on whatever adventure his son has planned for the day. 'Legends of Windemere' is his first series, but it certainly won't be his last.
View all posts by Charles Yallowitz →
This entry was posted in Thoughts and tagged anime, dirty old men, lechery, manga, peeping toms, perverted characters, Top 5 of 2019. Bookmark the permalink.