Thursday Slow Down and . . . I Forgot

Posted on September 22, 2016 by Charles Yallowitz 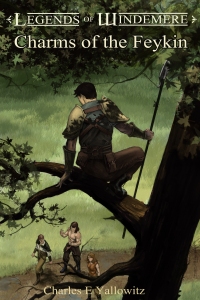 Return to Windemere in Charms of the Feykin!

I don’t know what it is about Thursday, but I rarely hit it with much energy.  This is a shame because it’s one of two days that I can dive right into writing when the kid is off at school.  Monday, Wednesday, and Friday are biking days, so I lose a little over an hour with that and the clean up.  This probably means I’m terrible at pacing myself or I take on too much every day. Could even be both, which is strange since I’ve managed to get to bed before midnight all week.  Even slept later, so maybe I’m actually getting more sleep than normal and my body isn’t used to it.

People tend to suggest a break, but that’s a double-edged sword.  I take a day to relax and things pile up to make the next day rough enough to drain the energy I regained.  Not to mention the rule that ‘An idle author is just asking for trouble’.  In the end, I’d rather work hard than let my attempt to rest get ruined by the idea that me sitting around is a sign I’m bored.  (This paragraph came out very much like a disclaimer.)

In the end, it is strange that Thursday is always the day where I’m dragging.  I could understand Friday, but it’s a little worrisome that I can’t even make it that far before being on the verge of collapse.  On the other hand, hearing the brewing tantrum behind me might explain things too.  My weekday mornings are never slow and steady, but a burst into action where I’m juggling email, blog, twitter, get kid dressed, kid’s breakfast, kid’s lunch, Wild Kratts, making sure the wife is awake to go to work, check dinner plan, and get the kid outside to hunt for acorns while waiting for the bus.  That’s the standard morning too, which doesn’t count appointments and meetings that occasionally turn up.

This was off the top of my head since I forgot what I was originally going to talk about.  It may have been book related, but I thought of it just as I was falling asleep.  There’s a vague memory of it being about book sales.  This might have stemmed from seeing a lot of posts this week about people not wanting to read or sales dying.  Charms of the Feykin is starting slow like the other books, so I’ve been drawn to this topic.  Still, I’m sure there has to be something and that’s what this missing topic might be connected to.  If I remember then . . . wait a second . . . oh, that’s good . . . Questions 3 might return next Thursday for this one.

Character from Some Old Pirate Movie

Charles E. Yallowitz was born, raised, and educated in New York. Then he spent a few years in Florida, realized his fear of alligators, and moved back to the Empire State. When he isn't working hard on his epic fantasy stories, Charles can be found cooking or going on whatever adventure his son has planned for the day. 'Legends of Windemere' is his first series, but it certainly won't be his last.
View all posts by Charles Yallowitz →
This entry was posted in Uncategorized and tagged author life, getting tired, parenthood, sleepy, thursday, writing. Bookmark the permalink.