Sneak Peek: Return of Cassidy and Lloyd (First, A Treat.)

Two treats for you!  Below the cut is an unedited opening for the next ‘Bedlam’ book.  I don’t know if it will stay like this, but it was written off the cuff.  More importantly, Jon changed up the cover a bit and it’s right here.  Hoping to make the switch on Friday or over the weekend.  What do you think? 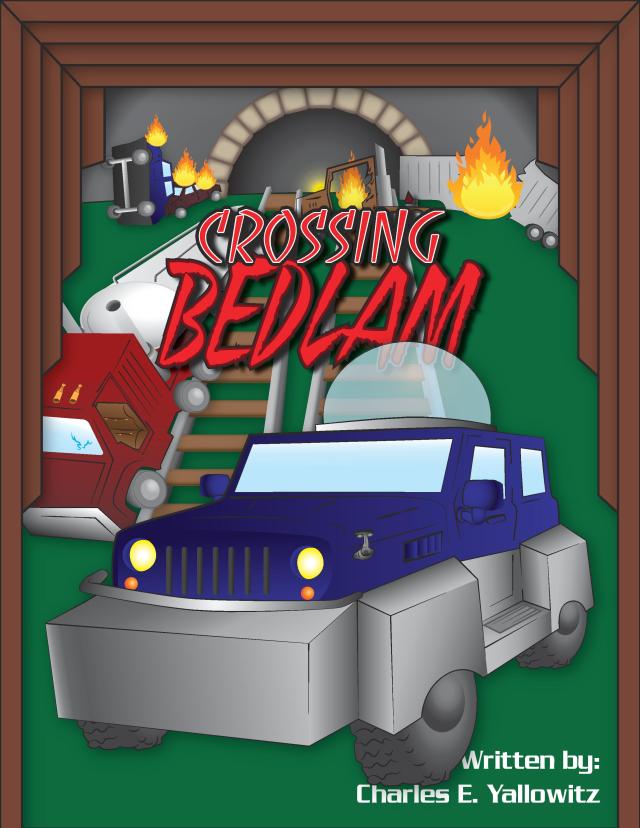 The only sound in the warehouse is the young woman’s gasping breath and the shuffling of the chair whenever she struggles. Wisp of blonde hair stick out of the head bag that is secured tight around her neck. A stun gun and two pistols have been placed at her bare feet, the weapons torn from the lining of her denim jacket. Bruises and cuts are on the prisoner’s body, none of them severe enough to need medical attention. The young woman tries to free her hands from the plastic ties, but the effort results in shallow gashes on her wrists. A whimper of defeat slips from her mouth and the noise is followed by a loud snort. The sound repeats itself until an office door opens and slams shut.

The young woman tenses when footsteps approach, the reaction making the solid fist to her head even more painful. A rough finger loosens the binding around her neck before the head bag is yanked off. She winces at the sensation of several hairs getting pulled from her scalp, the reaction earning laughter from the gang members. Clothed in leather and denim, the fifteen men and women enjoy the terror in their prey’s eyes. Even when their leader snaps his fingers for attention, the rest of the gleeful group remains only a few feet away. The only reason the young woman can tell that this scowling man is the one in charge is because he has the word ‘Top Hog’ etched into his forehead. Beyond that, he does not look any different than the rest of his gun-toting crew.

“So your boss thought she could send assassins to kill the Riflemen,” the black-haired leader says, earning a cheer from his men. A gentle smack to the prisoner’s head silences her gurgling attempt to argue. “Nothing you say can stop me. Don’t be thinking that serial killer will save you either. Idiot brought a paintball gun to Texas and thought he’d win a fight. All we need is to find the body and we can collect the bounty on him. Guess you are lucky that he’s wanted dead and you’re wanted alive by that warden up north.”

“I’d be careful boss,” a sword-wielding gang member warns. She leans away from the angry glare, but rolls up her sleeve to reveal a crudely stitched wound. “While this one isn’t as tough as her reputation says, she can still hit hard. Lost two men before we restrained her and three more are nursing broken balls. Maybe we should use some of our tranquilizer stash and keep her sedated.”

“No reason for th-” the gang leader begins as he runs his hand across the prisoner’s forehead. He rubs his fingers at the sensation of something sticky and looks closer to figure out what he has touched. “This scar is fake. Made from glue or something. Are you sure this is Cassidy?”

“She was with Lloyd Tenay at the bar,” a one-eyed man replies in a shaky voice. He becomes more nervous when everyone else takes a step away from him. “You told us to look for him and a blonde woman. She had the denim jacket, cursed a lot, carried two pistols, had a scar on her forehead, and the right tramp stamp. Everyone was calling her Cassidy and she drove up in the jeep. We made sure that everything checked out.”

The gang leader draws his large gun and presses it to the prisoner’s temple before leaning around her. Lifting her white shirt, he sees the unique tattoo that the stories mentioned Cassidy getting a year ago. The design is two pistols back to back with vines of bone curling around to bind them together. A strange discoloration catches his attention and he runs his finger along the woman’s side. He swears there is a seam and gets a dirty fingernail beneath what turns out to be a flesh-colored sticker. The gang leader yanks it off and shows it to his men, the prisoner biting her lower lip to avoid screaming. He can already see the tattoo is smeared from where he has run his thumb.

Enraged and embarrassed, Top Hog prepares to kill the fake Cassidy, but stops at the sound of rock music. The source is getting closer and is joined by maniacal laughter coming over a megaphone. With a snap of his fingers, the gang leader orders one of his men to take the prisoner to the office while the others head for the exit. Nobody gets very far before a blue jeep, which has been outfitted with a wide battering ram, smashes through the warehouse. The vehicle leaves a gaping hole in the wall, which is made worse by hooked chains on the rear bumper that tear more of the obstacle down. The attacker continues at full speed through crates, shelving units, and the slower of the gang members whose deaths are celebrated by honks of the horn. Tires screech as the driver hits the brakes and spins the jeep, the move appearing to have no purpose beyond making those inside dizzy. With an embarrassing thud, the vehicle hits the back wall and hisses to a stop.

The gang has already drawn their weapons and are beginning to approach the jeep when the sunroof opens. Bullets fly at the blonde figure that pops out, the projectiles leaving so many holes that the top half of their target falls off. The legs of the cardboard cutout are casually tossed to the floor before the shriek of a megaphone makes everyone cringe. Sitting face up, the gang members see that they have destroyed another Cassidy decoy. They are about to inch closer when the jeep briefly roars to life and the man inside begins making engine noises.

“So that was your plan?” Top Hog asks with a chuckle. He turns to see their prisoner is trying to roll away and fires his gun to stop her. “Two decoys, so that you could get the drop on us. Guess you thought more of us would get run over. Still thirteen enemies standing and you’re cornered in that jeep. Now the only question is if I send any of you back to the Duchess as a warning that she stays out of my business.”

“Actually, she was the bait and I was the distraction,” Lloyd announces from inside. With a gleeful laugh, he opens one of the doors and yanks it back as the gang shoots at him. “People make that mistake all the time. You see, bait is to drawn you in and, at least here, follow you back to the hideout. The distraction is to keep your eyes on me while my companion prepares her new toy. Don’t bother running, boys, because she’ll take that as an insult.”

Top Dog and his men turn toward the hole in the wall, which exposes them to the parking lot. The sun forces them to squint at the lone figure standing behind a loaded mini-gun, the weapon glinting in the light. Clouds move across the sky to make it easier for the gang to identify the denim jacket and blonde hair of their enemy. They take a few shots at the distant woman, but their bullets either miss completely or bounce of a clear shield attached to the top of the weapon. A slamming car door causes them to jump, but they turn in the wrong direction to stop Lloyd from racing toward the prisoner. The black-haired serial killer scoops up the young woman and dives behind a crate of grenades. Unsure of what to do, Top Dog and his men attempt to scatter for cover.

“I hate moving targets,” Cassidy growls before pulling the trigger and unleashing destruction on the warehouse.

Charles E. Yallowitz was born, raised, and educated in New York. Then he spent a few years in Florida, realized his fear of alligators, and moved back to the Empire State. When he isn't working hard on his epic fantasy stories, Charles can be found cooking or going on whatever adventure his son has planned for the day. 'Legends of Windemere' is his first series, but it certainly won't be his last.
View all posts by Charles Yallowitz →
This entry was posted in Crossing Bedlam, Sneak Peeks, Teaser Tuesday and tagged adventure, Bedlam, Cassidy, Crossing Bedlam, dystopia, Lloyd Tenay. action, post-apocalypse, prisoners, sequel, sneak peek, teaser. Bookmark the permalink.

21 Responses to Sneak Peek: Return of Cassidy and Lloyd (First, A Treat.)