Posted on February 26, 2019 by Charles Yallowitz 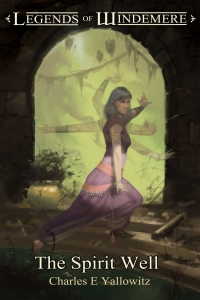 Another blast from the past for Teaser Tuesday.  Enjoy this piece of Legends of Windemere: The Spirit Well.

The caressing breeze is tinted with the taste and smell of salt, which only seems to affect Timoran’s keen senses. For the second time in ten minutes, he takes a few sips of Ifrit mead to cleanse his palate and tucks the flask into his vest pocket. The land has transformed from the solid ground of the forest to the softer earth one would find near the edge of a bog. Boots squish into the mire, which is becoming thicker with every step. Several times they stop to rest their aching legs and clean the mud off their soles before the layer gets too heavy. It is mid-afternoon when they come within view of the mangrove swamp and marvel at the unusual trees rising above the dark water. Patches of floating flowers drift among the exposed roots, revealing the swirling currents that bring the water to and from the distant ocean. The champions squint when they see tiny jets bursts from the depths, the shots knocking insects into the water where they are eaten by fish. Warbling birds and grunting frogs can be heard, but none of them are visible beyond the unexpected splash or flap of wings.

A group of wild hogs swim into view and stop at the sight of the adventurers, their territorial squeals filled with enough anger to give the intruders pause. The brave and hungry animals look ready to charge, but a low growl from Timoran scares them away. Watching the furry beasts retreat, the champions notice that there are paths of shallow water that they can walk along. They also see that there are pulsating leeches latching onto the hogs’ hindquarters, which makes all of them mutter and curse under their breath.

“Tuck your pants into your boots unless you have the power to keep leeches away,” Delvin suggests, nodding his head to Sari. The gypsy helplessly shrugs since switching out of her skirt means losing access to her weapons. “I think I have some strong alcohol that you can rub on your legs. Not sure if it’ll work or make things worse. Another option is to push through and let Nyx burn them off you later.”

“I have an herbal rub that keeps insects and other blood-sucking creatures away. You should use it too, Dariana, since your slippers give you no protection,” Timoran states before tossing a small pouch to Sari. The barbarian finishes getting ready and draws his great axe to check the edge. “Does the map tell us the correct path? We keep checking and it never changes. I am confused as to how it is going to help us at this point if it cannot show more than a continental view.”

“This is where I use the Compass Key. Whether it wants me to or not,” Dariana says as she tightens the straps on her amber shirt. Pulling out the map, she puts it to her head and tries to draw her memories out. “I was hoping to pull some residual energy off this, but it looks like I have no choice. This is where the challenge of the Spirit Well will begin. I don’t see any signs of traps, but that makes me even more nervous. Can I have the Compass Key?”

“Fizzle not see much from high,” the drite reports as he returns to his friends. Scratching his head with his tail, he darts among the nearest of the mangroves. “Thick swamp with birds. Not much space for feet. Fizzle see herds. Place not look like temple. Too open and not special. Compass Key must change.”

“We are about to find out,” Timoran claims before taking the relic out from under his Ifrit fur vest. Unclasping the chain, he places it in Dariana’s outstretched hand and takes several steps away. “History has shown that what happens next will be a challenge. Remember that we are with you.”

Dariana nods while running her fingers around the central pearl of the Compass Key. She can feel some resistance from the relic, which turns in her hand and starts to grind into the flesh of her palm. Touching the diamond orb that symbolizes her temple, the silver-haired woman tries to force part of her aura into the gem. A dull groan emanates from the awakened pieces, which spin in their settings and work toward rejecting Dariana. Refusing to surrender, she claps her hands together and grips the Compass Key with all of her strength. Ebony veins run along her arms and neck, but nobody can tell if the energy is coming from the telepath or the artifact. The black ooze seeps from her nose and mouth, drying in the salty air and flaking away after a minute. It is a violent battle of magic and willpower, which the exhausted champion is on the verge of losing.

With a shout of rage and frustration, Dariana slams the Compass Key into her chest where it fuses with her shirt and skin. She rises into the air as beams of light burst from the relic and disappear into the swamp. A low creaking can be heard from the trees, which rustle and begin to twist unnaturally. Wild pigs, otters, and other animals sprint away from their homes as the mangroves become an impenetrable network of dense roots. Dariana’s eyes are nothing more than glassy, white orbs as she is sucked into the natural wall. The telepath stares into the distance while her limbs are constricted and locked in place by the branches. A slender root snakes out to wrap around her forehead, the bond forcing her to face the darkening horizon. With a final shifting of the mangroves, the barrier is complete and the Compass Key goes silent.

Charles E. Yallowitz was born, raised, and educated in New York. Then he spent a few years in Florida, realized his fear of alligators, and moved back to the Empire State. When he isn't working hard on his epic fantasy stories, Charles can be found cooking or going on whatever adventure his son has planned for the day. 'Legends of Windemere' is his first series, but it certainly won't be his last.
View all posts by Charles Yallowitz →
This entry was posted in Teaser Tuesday, The Spirit Well and tagged adventure, Dariana, Delvin, epic fantasy, excerpt, fantasy, Fizzle, Legends of Windemere, Luke Callindor, magic, mangroves, Nyx, Sari, sneak peek, sword & sorcery, teaser Tuesday, The Spirit Well, Timoran, traps?, wilderness, Windemere. Bookmark the permalink.