Teaser Tuesday: How to Cool Off an Angry Nyx

Posted on September 27, 2016 by Charles Yallowitz

This is an earlier part of the story where the heroes reach the first part of Delvin and Sari’s journey in the jungle.  Charms of the Feykin has them following the path that was shown in Tribe of the Snow Tiger.  Not in detail, but the major points so the heroes know what happened to their friends.  Anyway, this shows what kind of mindset Nyx is in for this adventure.  Those poor, poor villains:  (As before there are possible spoilers below that I couldn’t remove to keep the excerpt clear.) 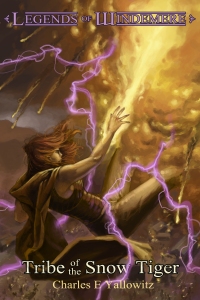 “Then let me show you what you’ll be up against,” the channeler whispers as a fireball appears between her eyes. The destructive spell bloats and is about to launch toward the building when Luke steps in the way. “What are you doing, little brother? Let me put a little more fear into these people.”

“I know you’re angry, but you shouldn’t set fire to their building,” the forest tracker states, taking a step to the right when the spell shifts. “Remember that we have no problem with the other locals, Nyx. We’re in a jungle, so a fire can spread pretty easily. So maybe you should let someone else have a little fun at our enemies’ expense.”

Dariana has the cultists move away from the building as Timoran approaches the mud and wood structure. The barbarian tightens his grip on his great axe, turning the weapon so that he will strike with the blunt side instead of the edge. He stops abruptly and moves to the other side of the building, not wanting to risk any nearby homes. Focusing on his desire to destroy the small headquarters, Timoran can feel a magical serenity seep from the Ring of Aintaranurh and spread throughout his body. Orange energy flows from the relic, which becomes blood red as it bonds to the spark of aura inside its owner. Instead of relaxing his muscles, the enchanting calm makes them stronger and more flexible. When he is ready, the barbarian roars and swings his great axe at the building. With a boom that scares flocks of birds into the sky, the cultists’ headquarters snaps around its base and is sent rolling toward the river. A handful of cloaked members are cowering inside and they remain hiding even after realizing they have been exposed.

“Guess that was more entertaining to watch than fire,” Nyx mutters before turning her attention back to the woman in the well. She dips the cultist low enough that it looks like both of them are about to tumble into the sweltering shaft. “Are you ready to tell me everything you know about my friends? I like the heat, so you’re going to pass out long before I do. Not sure I can hold onto you after you go limp.”

“I swear, I don’t know what happened to your friends!” the woman screams, sweat pouring down her face. Her hand slips from Nyx’s wrist, which causes her to sob tears that evaporate before they fall off her face. “If the drite is alive then the others probably survived the Judges as well. Our hunting parties would be chasing them if they’re still free in the wilderness. Several of the warriors here just finished a rotation with those groups, so they might know more about your friends than I do. You can take them and as many boats as you need. I’ll even go with you if you want.”

With a wicked grin, Nyx yanks the cultist out of the well and slams her onto the ground. She straddles her enemy and grows fire-tipped claws that reach out for the woman’s face. Luke clearing his throat makes the channeler growl in disappointment and she retracts the deadly weapons. Pouting and cursing, she sits on the woman’s stomach and leans forward to bring their faces within an inch of each other.

“You’re going to stay here in case I have to come back,” Nyx whispers, her finger running along the cultist’s neck. She can hear the warriors putting boats in the water, the men obeying Dariana’s mental commands. “And it will only be me who comes back. My friends won’t be here to stay my hand. The Snow Tiger Tribe call me a Near God and I’ve defeated enemies who are stronger than your worst nightmares. So you better pray we never meet again. In fact, I highly recommend that you leave Anpress and make sure I can never find you. Do you understand, little executioner?”

“Oh, and one more thing,” the half-elf states as she gets to her feet. A punch to the face knocks the woman out and Nyx leaves her sprawled on the ground. “That’s for tricking my friends and trying to do the same to me. Thanks for playing your role, little brother. Not sure what I’d have done if you didn’t act as my better half.”

Luke stares at his best friend as he realizes what she is talking about. “You mean the sadistic thing was an act? Why didn’t you tell me?”

“I thought it would be obvious. It’s not like I’m Stephen.”

Nyx wipes the dirt from her pants and cools the well before heading for the boats. The other champions watch in stunned silence as the cultist warriors shy away from the channeler. Not wanting to waste any time, she stomps her foot to shake the ground, which shocks the robed figures back to work. Three boats are placed in the water, each one adorned with the bells that Dariana knows are to attract the Judges. Nyx hops into the middle vessel and happily waves for her friends to hurry up, a clap of her hands driving their nervous guides to fill the other two ships.

“I don’t know which version scares me more,” Luke whispers while pretending to tie his boot laces. A chill runs along his spine when he watches his friend make herself comfortable in the boat. “The angry Nyx is terrifying, but this happy, playful one is unnerving. Do you think her Compass Key tattoo is causing trouble again?”

“I was under the impression that it became dormant. Also, we would see it glowing under her shirt if it was active,” Timoran replies, leading the way to the river. Taking out a flask of Ifrit mead, he takes a satisfying gulp of the potent alcohol. “She seems to have become very anxious during our travels. The closer we get to Delvin and Sari, the more excited Nyx will get. I am not sure if that is a bad thing considering we have many dangers ahead of us. Still, I agree that her actions are disturbing.”

“At least you two can’t read her thoughts,” Dariana says with a shudder.

Charles E. Yallowitz was born, raised, and educated in New York. Then he spent a few years in Florida, realized his fear of alligators, and moved back to the Empire State. When he isn't working hard on his epic fantasy stories, Charles can be found cooking or going on whatever adventure his son has planned for the day. 'Legends of Windemere' is his first series, but it certainly won't be his last.
View all posts by Charles Yallowitz →
This entry was posted in Charms of the Feykin, Teaser Tuesday and tagged anger, Dariana, epic fantasy, excerpt, fantasy, fantasy series, fire, Fizzle, high fantasy, Legends of Windemere, Luke Callindor, magic, Nyx, Sari, sorceress, sword & sorcery, teaser, temper, Timoran Wrath, tuesday, Tuesday Teaser, Windemere. Bookmark the permalink.

10 Responses to Teaser Tuesday: How to Cool Off an Angry Nyx