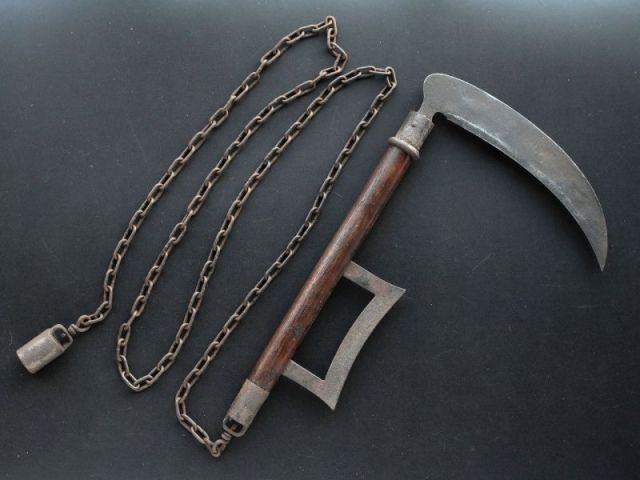 Long ago, Kira Grasdon was a one-scene character who complained about an injured hand and then had a run-in with Kellia.  That was it for her until an editing run placed her in a sparring match with Luke Callindor, Kellia, and Roland Gauntlier.  I kept adding her into scenes until she rose up the ranks to a supporting character.  Of course, this came with a slight problem . . . she needed a weapon.

Back in those days, I’d slap a sword on a character and leave it that.  Yet, I knew I had to do something else as Kira popped up more often in outlines.  I stalled a lot on this because nothing felt right for her.  She was an heiress who wasn’t a good student at the warrior academy, but showed blips of promise.  In truth, she held herself back and showed a discomfort towards being seen as capable until she met Luke.  This really stood out to me and I felt she needed a unique weapon, which is also what led to Kira coming from a different region.  I designed Bor’daruk as a desert city and gave her . . . a scimitar that lasted for an hour.  Yeah, I was hitting a lot of dead ends here until I relaxed and saw this:

One of the less obvious highlights in Quest of the Brokenhearted might by the trusty weapon of our heroine.

I was already into anime and suddenly got the idea to start implementing Asian weaponry into Windemere.  Since it wasn’t Earth, I had no reason to avoid putting these things alongside the typical European weaponry.  Thankfully, I didn’t try any other weapons for Kira besides the kusari-gama because that one worked out perfectly.  It allowed her to do a few tricks that I needed from her during the assault on Hamilton Academy and it helped her stand out.  The rationale for her people designing the chain/sickle/club combo was to handle the giant scorpions that were common in the desert.  Ranged weapons are best, but getting jumped meant needing to handle that tail.  The kusari-gama had a decent distance and some level of binding, especially the enchanted models.  It really helped Kira stand out like I wanted her to.

Unlike swords, I was never really sure how a kusari-gama works and looked up a bunch of videos.  It’s not an easy weapon, so I decided to be a little more fictional with its use than other weapons.  The style had a lot of flicking out with the club and precision slashing with the sickle, which required a lot of agility on Kira’s part.  Defensive moves were more complicated since it’s hard to block with a chain and the two ends aren’t at the best at parrying.  I came up with one version where the user wraps the chain around their arm and holds one of the ends to create a semi-armor sleeve.  This requires time though, which again went back to putting Kira into a style that is built around speed, agility, and reflexes.  This wasn’t really her forte at the start, so I mentioned a few times that she really buckled down and trained.  Making her a quick study and fairly cunning definitely helped out in this area.

In regards to Quest of the Brokenhearted, the kusari-gama influenced a lot of Kira’s ‘upgrades’ that she gains, which is obvious.  It also is a big reason why I continued on with this idea and put Kira specifically into it.  Now, it does get a little difficult since the timeline on how I created this story is all over the place.  I knew I wanted to do a story that gave her closure.  I also wanted to do a story that was inspired by Castlevania.  It took a little while for me to get a mental connection, which ended up being that Kira and Simon Belmont use similar weapons.  He has a whip and she has the kusari-gama, which might sound like a silly thing to work off of.  Yet, I really enjoyed having characters enter the fights with more common fantasy weapons and then there’s Kira leaping and swinging around in an entirely different style.

I think it’s important in fantasy to give your main characters something that can identify them.  Weapons are obviously one way to go.  I tend to gravitate towards this because I focus on action.  Luke Callindor had his sabers, Timoran Wrath had his axe, and Kira Grasdon had her kusari-gama.  There’s no way for me to picture her without that weapon either in her hand, on her belt, or hidden in her dress.  This is also the weapon that opened up a lot of possibilities for me in Windemere.  No reason to stick solely with European weapons once someone is running around with a chain-and-sickle.

Charles E. Yallowitz was born, raised, and educated in New York. Then he spent a few years in Florida, realized his fear of alligators, and moved back to the Empire State. When he isn't working hard on his epic fantasy stories, Charles can be found cooking or going on whatever adventure his son has planned for the day. 'Legends of Windemere' is his first series, but it certainly won't be his last.
View all posts by Charles Yallowitz →
This entry was posted in Character Origins and tagged chain, combat, fantasy, fiction, Kira Grasdon, kusari-gama, Quest of the Broken Hearted, sickle, sword & sorcery, weapons, Windemere. Bookmark the permalink.