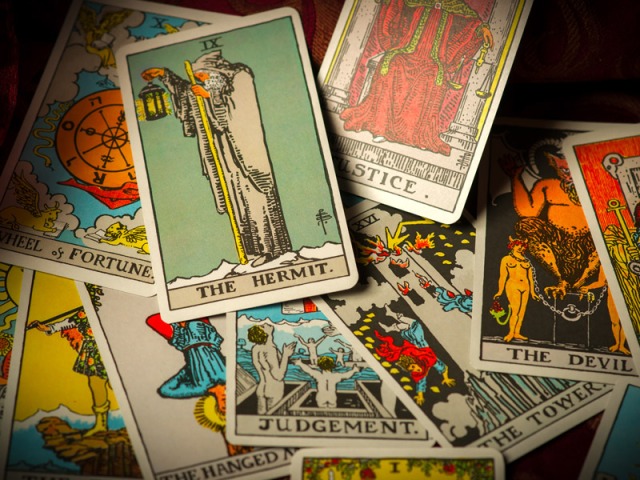 Honestly, I don’t know what to say about Tarot because I feel like I’ve heard and said it all throughout the years.  As I mentioned before, I hung out with a lot of Wiccans and this was a common tool.  Everyone had their own deck and there were various spreads with people having different preferences.  It was interesting how every person seemed to have their own flavor here.  That makes it even more difficult to go into detail because there’s an individuality that I saw at times.

I think most people have a general idea of how these work too.  You have the person think of question or ask it out loud while one of you shuffles the deck.  Depending on the details, you choose the cards and place them one by one.  This was typically done face down to prevent either party from jumping ahead or making assumptions in the early stages because of what they see coming.  I remember this being important in the 3-card Past, Present, and Future one.  Interesting thing is that I only remember seeing the 3-card and the very complicated Celtic Cross in college, which felt like the two extremes.  Anyway, you go card by card with each one having a certain meaning, which is also dependent on if it’s right side up or upside down.  Again, you have some vagueness to the answers to allow for personal deciphering.

So, what can I really say about tarot?  I mean, it does get used a lot in fiction and sometimes even correctly.  All I can share are some tips that one can consider when working this into a story.

That’s all I can really think of as far as tarot goes.  There’s plenty of sites out there to help you figure out more.  Fortune telling in general is a tough addition to a story because you want to give foreshadowing without being obvious.  Yet, being too vague can cause all sorts of problems as well.  This might be why you don’t see it that often and villains tend to have the seers who warn them of an imposing threat.  That one we can all see coming since we follow the hero throughout the story.  Still, using this could always cause a small problem in terms of spoilers, so be careful.

Charles E. Yallowitz was born, raised, and educated in New York. Then he spent a few years in Florida, realized his fear of alligators, and moved back to the Empire State. When he isn't working hard on his epic fantasy stories, Charles can be found cooking or going on whatever adventure his son has planned for the day. 'Legends of Windemere' is his first series, but it certainly won't be his last.
View all posts by Charles Yallowitz →
This entry was posted in Thoughts and tagged decks, fantasy, fortune telling, future, magic, tarot cards, writing. Bookmark the permalink.

30 Responses to Tools of the Telling Trade: Tarot Cards